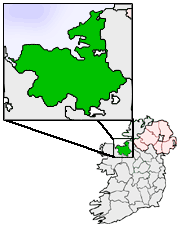 Geevagh ("An Ghaobhach" in Irish) is a village in the south-east corner of , on the R284 . The name, meaning "the windy (place)", accurately describes the characteristic climatic feature of the village and its surrounding countryside. The name Geevagh also refers to the local Catholic parish, the boundaries of which are wider than those of the village itself.

Geevagh and most of its surrounding parish lie wedged between "Carran Hill" (458 m) to the north east and a series of to the south west, roughly 170 m in height. Two notable lakes lie encircled by these hills to the south west: "Lough Bo" (93 m) and "Lough Nasool" (109 m). Lough Nasool (Lake of the Eye) is unusual in that it has on several occasions drained away, and in the summer of 2006 it almost completely drained, diverted into underground channels.

Lying just beyond the southern borders of Geevagh lies a much larger lake: . To the east lies the border with and to the north beyond Carran Hill lies . To the west lies the village of and most of . The underlying rock structure is a combination of limestone, shale and sandstone, many examples of which can be seen in the local stone walls. A covers the top of Carran Hill and boggy land with poor quality soil is a feature of the local farms, the shallow soil being fertile enough to support only low density mixed farming of cattle and sheep. As a consequence of this, many local farmers supplement their meager income from farming with wages from jobs in the local big town of . One of the few local industries that supplied work to generations of men from the locality was the coal mines, located near the community of "Glenkillamey" to the north of Geevagh. This mine was in operation in one form or another since the eighteenth century and provided a low grade coal to a small power station operated by the ESB () since 1958. However the mine closed for the last time in 1990 hitting the local communities hard, particularly in the Arigna/Glenkillamey area. In keeping with its past involvement in power generation, 2005 saw the installation of six wind turbines at "Carrownadargny". These electricity generating turbines - owned by Orliven Ltd - are each capable of producing 0.85MW of power, and are manufactured by the Spanish company Gamesa. The towers on which the turbines stand are 44 metres high, with a combined blade diameter of 52 metres. The turbines can produce enough energy to save 13770 tonnes of CO2, the equivalent of importing 33000 barrels of oil.

In common with much of County Sligo, there are many signs of ancient habitation in the locality, including cairns, tombs, and ring forts. Later signs of early Christian structures includes the ruins of a church attributed to Saint Patrick. Many of these old structures have spawned a rich story-telling tradition in the locality with many outlandish tales explaining their origins, such as the tale " of the Evil Eye" being associated with the disappearance of Lough Nasool.

There are however real and present evidence of many church ruins including in particular the notable Abbey on the shores of Lough Arrow, a Dominican Priory from the early sixteenth century. It contains the grave of Terence McDonough, a member of the local clan that governed much of the area prior to the post - Cromwellian seizure of the land in the parish and its dispersal amongst English settler families such as King and Nicholson, and later its transfer to landlords such as Duke, Keogh and Whitney. Despite undoubted hardship, including sustained emigration, the community survived through resilience, finding sustenance in the family, the church, the , music and the local pubs, though not necessarily in that order. The year 2008 marks an interesting centenary in the history of Geevagh. It is difficult from today's position to realise the distressed state of the parish in 1908. Widespread evictions from the local Keogh estate meant many poor families eked out an existence of sorts on the rough barren slopes of Carran mountain. A campaign of non payment of rent exposed many families to such a fate, and in an effort to prevent further evictions, the organised demonstrations to prevent delivery of eviction notices by local postmen.This led to several confrontations in January 1908 between a large number of citizens and the police. Court cases ensued against around two dozen locals, some of who ended up serving hard labour in prison for up to six months. While the court cases and prison terms were on going, the local community rallied around the families of the prisoners, making sure their farms were worked and tilled. It was not until summer 1909 that a resolution came with the release of the last prisoners, to much local rejoicing by the parish as a whole. John C. Mc Ternan in his book "Olde Sligo" (1997) records the 1908 events in interesting detail.

In recent years, the outlook of course has become much brighter. Coinciding with a pick up in the Irish economy in general, plus excellent work from the local headmaster John Hughes, and the then parish priest Fr O'Connor and others, a new school was built in 2001. This was followed in recent years by several new building projects around Geevagh crossroads, invigorating the local area and making it a home to new families adding their lot to people whose families have lived there for 10+ generations. As of 2008, this good work continues today.