Wild crocus growing in the foothills of the Bernese Alps in Switzerland.

Crocus (plural: crocuses, croci) is a genus in the iris family comprising about 80 species of perennials growing from corms. Many are cultivated for their flowers appearing in autumn, winter, or spring. Crocuses are native to woodland, scrub and meadows from sea level to alpine tundra in central and southern Europe, North Africa and the Middle East, on the islands of the Aegean, and across Central Asia to western China.

The name of the genus is derived from the Greek krokos (κρόκος). This in turn is probably a loan word from a Semitic language, related to Hebrew כרכום karkōm, Aramaic ܟܟܘܪܟܟܡܡܐ kurkama, Persian and Arabic كركم kurkum, which mean saffron or saffron yellow.[1] The name ultimately comes from Sanskrit कुङ्कुमं kunkumam, unless the Sanskrit word is from the Semitic one.[2]

There are about eighty species of crocus (of which approximately 30 are cultivated). Their cup-shaped, solitary, salverform flowers taper off into a narrow tube. Their color varies enormously, although lilac, mauve, yellow and white are predominant. The grass-like, ensiform leaf[3] shows generally a white central stripe along the leaf axis. The leaf margin is entire. Crocuses typically have three stamens. The spice saffron is obtained from the stigmas of Crocus sativus, an autumn/fall-blooming species. 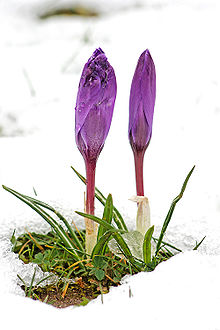 Crocus appearing through the snow

Cultivated varieties mainly represent five species: C. vernus, C. chrysanthus, C. flavus, C. sieberi and C. tommasinianus. Among the first flowers to bloom in spring, crocuses are popular with gardeners. Their flowering time varies from the late winter C. tommasinianus to the later large hybridized and selected Giant "Dutch crocuses" (C. vernus). Crocus flowers and leaves are protected from frost by a waxy cuticle; in areas where snow and frost occasionally occur in the early spring, it is not uncommon to see early-flowering crocus blooming through a light late snowfall (right).

Most crocus species and hybrids should be planted in a sunny position, in gritty, well-drained soil, although a few prefer shadier sites in moist soil. Some are suitable for naturalising in grass. The corms should be planted about 3 to 4 cm deep; in heavy soils a quantity of sharp grit should be worked in to improve drainage.

Some crocuses, especially C. tommasinianus and its selected forms and hybrids (such as 'Whitewell Purple' and 'Ruby Giant'), seed prolifically and are ideal for naturalising. They can, however, become weeds in rock gardens, where they will often appear in the middle of choice, mat-forming alpine plants and can be difficult to remove.

Cultivation and harvesting of crocus was first documented in the Mediterranean, notably on the island of Crete. Frescos showing them are extant at the Knossos site on Crete[4] as well as from a comparably aged site on Santorini.

The first crocus seen in the Netherlands, where Crocus species are not native, were from corms brought back in the 1560s from Constantinople by the Holy Roman Emperor's ambassador to the Sublime Porte, Ogier Ghiselin de Busbecq. A few corms were forwarded to Carolus Clusius at the botanical garden in Leiden. By 1620, the approximate date of Ambrosius Bosschaert's painting (illustration, below), new garden varieties had been developed, such as the cream-colored crocus feathered with bronze at the base of the bouquet, similar to varieties still on the market. Bosschaert, working from a preparatory drawing to paint his composed piece spanning the whole of Spring, exaggerated the crocus so that it passes for a tulip, but its narrow, grasslike leaves give it away. 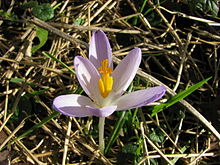 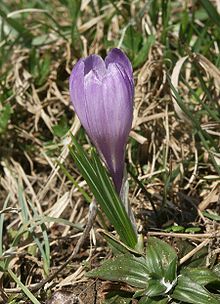 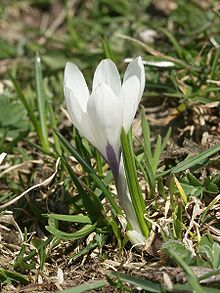 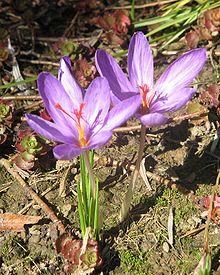 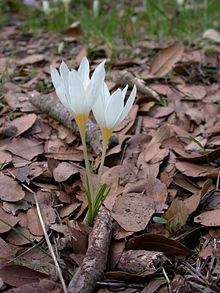 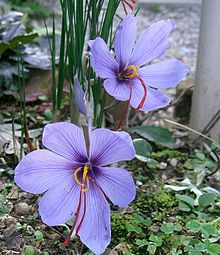 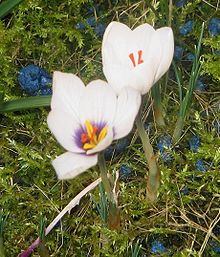 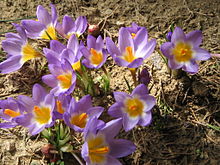 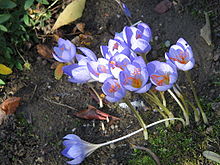 The taxonomic classification proposed by Brian Mathew in 1982 was based mainly on three character states:

The seven species that have been discovered since then have been integrated into this classification.[5]

Molecular analysis carried out at the University of Copenhagen suggests that this classification should be reviewed. In particular, the DNA data suggest that there are no grounds for isolating Crocus banaticus in its own subgenus Crociris, even though it is a unique species in the genus. Because it has a prophyll at the base of the pedicel it therefore would fall within section Crocus, although its exact relationship to the rest of the subgenus remains unclear.

Another anomalous species, Crocus baytopiorum, should now be placed in a series of its own, series Baytopi. Crocus gargaricus subsp. herbertii has been raised to species status, as Crocus herbertii. Perhaps most surprisingly, autumn-flowering Crocus longiflorus, the type species of series Longiflori (long regarded by Mathew as "a disparate assemblage"), now seems to lie within series Verni. In addition the position of Crocus malyi is currently unclear.

DNA analysis and morphological studies suggest further that series Reticulati, series Biflori and series Speciosi are "probably inseparable". Crocus adanensis and Crocus caspius should probably be removed from Biflori; Crocus adanensis falls in a clade with Crocus paschei as a sister group to the species of series Flavi; Crocus caspius appears to be sister to the species of series Orientales.

The study shows "…no support for a system of sections as currently defined", although, despite the many inconsistencies between Mathew's 1982 classification and the current hypothesis, "…the main assignment of species to the sections and series of that system is actually supported." The authors state that "…further studies are required before any firm decisions about a hierarchical system of classification can be considered" and conclude that "future re-classification is likely to involve all infrageneric levels, subgenera, sections and series".[6]

Below is the classification proposed by Brian Mathew in 1982, adapted in accordance with the above findings:

A. Section Crocus : species with a basal prophyll

Series Scardici: spring-flowering, leaves have no pale stripe on the upper surface

Series Versicolores: spring-flowering, corms with tunics, which for the most part have parallel fibers, flowers with conspicuous exterior striping

Series Reticulati: corm tunic for the most part decidedly covered with reticulated fibers, flower produced in winter or spring, style three-forked or much divided

Series Biflori: tunics of corms split into rings at the base, either entire or with toothlike projections, leathery in texture, spring- or late-winter flowering, style three-forked

Series Speciosi: corm tunic splits into rings at the base, leathery or membranous, foliage after the flowers, autumn-flowering, style much divided

Series Aleppici: tunics of the corms membranous, with split, parallel fibers, foliage produced at the same time as the flowers, fall- or winter-flowering

Though some true crocus bloom with the fall (autumnal) rains, after summer's heat and drought, the name autumn crocus is often used as a common name for Colchicum, which is in the lily family (Liliaceae), and which has six stamens; it is also known as meadow saffron, though unlike true saffron, the plant is toxic.

The financial community sometimes refers to companies or economic sectors that rise early after an economic downturn as "crocuses" in reference to the flower's ability to thrive in the late winter or early spring.[8]