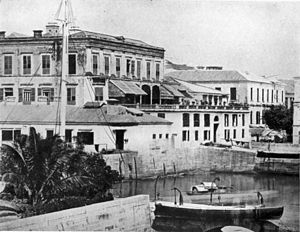 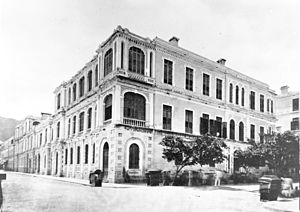 Dent & Co. (Chinese: 寶順行) or Dent's, was one of the wealthiest British merchant firms, or hongs, active in China during the 19th century. The company was a direct rival to Jardine, Matheson & Co. Together with Russell & Co., the companies are recognised as the three original Canton companies in early Colonial Hong Kong.

Thomas Dent arrived in Canton in 1823, and joined Davidson & Co as a partner. When Davidson left in 1824, the company changed its name to "Dent & Co.". In 1826, Thomas Dent was joined in by Lancelot Dent. Lancelot succeeded Thomas as the senior partner when Thomas departed the company in 1831. Lin Zexu's warrant for the arrest of Dent in 1839 to force him to hand over his store of opium, was the opening shot of the First Opium War.

Thomas Chaye Beale joined the firm as a partner in 1845 when the firm became Dent, Beale & Co.[1] It once again became Dent & Co. upon Beale's departure in 1857.

In 1841 Dent moved its headquarters to Victoria City, where it was one of the first companies in Hong Kong to purchase land property as part of the urban development program in Central District.[2] Dent was one of the very first traders to open offices when Shanghai opened to foreign trade in 1843. It built offices there at 14, The Bund, and became involved in the international silk and tea trade.

In 1866, the financial world was rocked by the collapse of Overend, Gurney and Company, a discount house in Lombard Street, London, causing a run on many banks which in turn brought down many other businesses. Dent's was forced to shut its Hong Kong office in its wake. Jardine's averted disaster by learning the news sooner – its mail steamer carrying news from Calcutta arrived one hour earlier than others – and emptied its balances at a failing bank before anyone else had heard of the news in Hong Kong. The company officially folded in 1867.[2] Its headquarters moved to Shanghai following the collapse in Hong Kong.

Dent occupied a building on the corner of Pedder Street and Praya Central (the waterfront), where The Landmark complex is situated. The first building was constructed in 1850, and was redeveloped in 1864.[3]

After Dent collapsed, half of its land on Pedder Street was sold to the newly established Hongkong Hotel Company. The hotel was duly built, and became Hong Kong's first deluxe hotel. The remaining part of the west wing was let out to other trading firms. The hotel expanded northwards, and was later rebuilt into a 6-storey structure, completed in 1893,[4] but the hotel burned down in 1926.

The site was acquired by Hong Kong Land, and Gloucester Tower was constructed in 1932. It was redeveloped into The Landmark in 1979.[3]