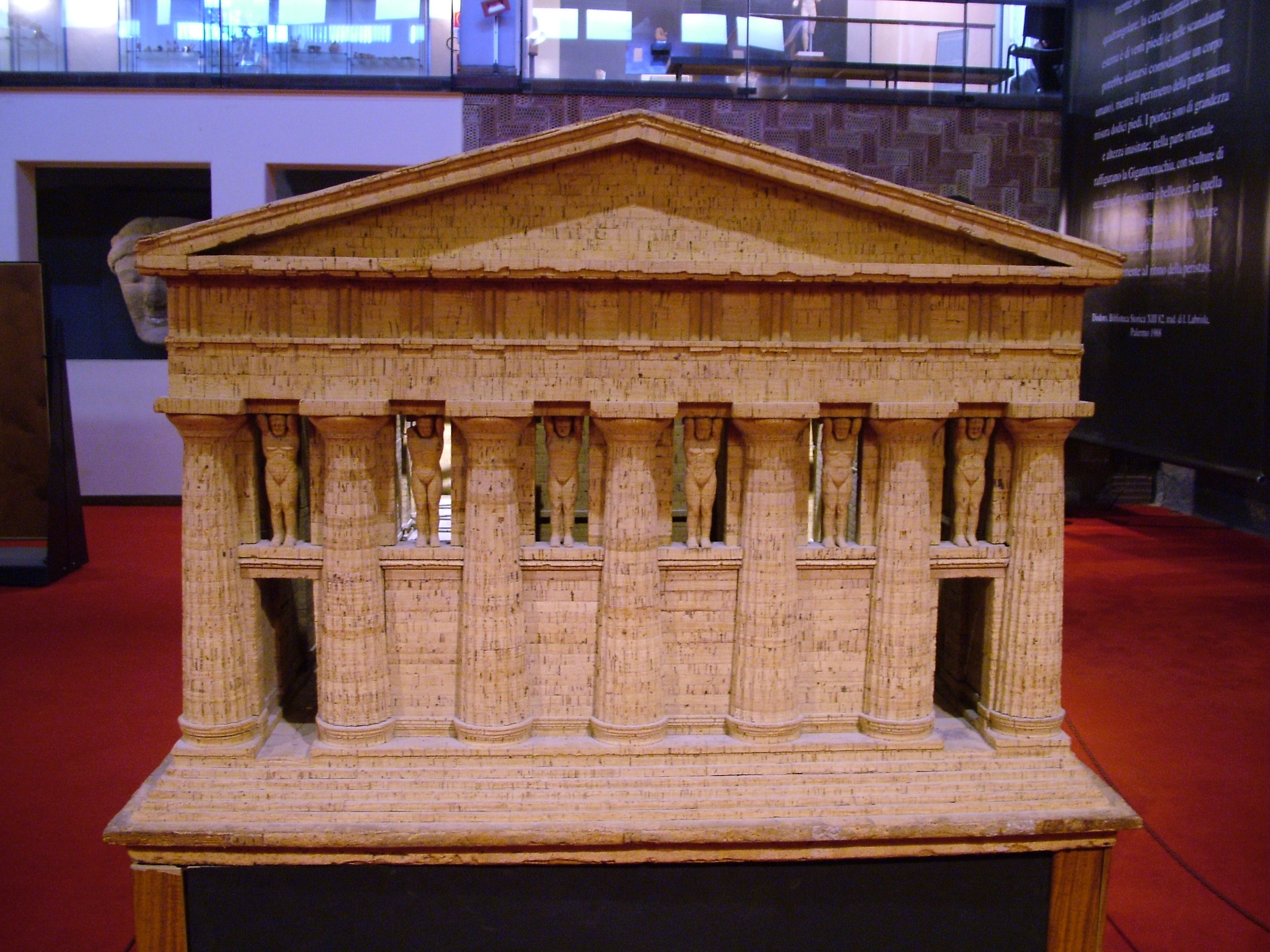 caption = Model of the Temple of Olympian Zeus in the Archaeological Museum, Agrigento
map_type =
latitude = 37.291
longitude = 13.584
location = ,
architect =
client =
engineer =
construction_start_date = 480 BC ?
completion_date =
date_demolished =
cost =
structural_system =
style = Doric
size = Length : convert|112|m|ft|0 Width : convert|56|m|ft|0 Height : convert|20|m|ft|0The Temple of Olympian Zeus (or Olympeion; known in Italian as the "Tempio di Giove Olimpico") in , was the largest Doric temple ever constructed, although it was never completed and now lies in ruins. It stands in the with a number of other major Greek temples.

The history of the temple is unclear, but it was probably founded to commemorate the , in which the Greek cities of Akragas (Agrigento) and Syracuse defeated the under . According to the historian , the temple was built using Carthaginian slave labour &ndash; presumably defeated soldiers captured after the battle.

The temple was eventually toppled by earthquakes and was later quarried extensively to provide building materials for the modern towns of Agrigento and nearby . Today it survives only as a broad stone platform heaped with tumbled pillars and blocks of stone.

The final dimensions of the Temple of Olympian Zeus would have been 108 m by 52 m, with a height of 20 m. It stood on a five-stepped platform approximately 4.5 m above the ground. The front of the temple had seven columns, an archaic feature that precluded the addition of a central door. The immense weight of its required a unique design; unlike other temples of the time, its outer columns did not stand on their own as a freestanding but were half-columns engaged against a continuous curtain wall. In between the columns were colossal s or atlantes, stone figures standing some 7.5 m high. The figures appear to have alternated between bearded and clean-shaven figures, all nude and standing with their backs to the wall and hands upstretched above their heads.

The exact positioning of the telamons has been the subject of some archaeological debate, but it is generally believed that they stood on a recessed ledge on the upper part of the outer wall, bearing the weight of the upper portion of the temple on their upheld hands. One of the fallen telamons has been reassembled in the nearby archaeological museum and another can be seen on the ground among the ruins of the temple. Attempts to make a detailed reconstruction of the telamons' original appearance have been hampered by their poor condition; they are heavily eroded and all of their feet appear to be missing.

The telamons are an exceptionally unusual feature and may possibly have been unique in their time. They have been interpreted by some as symbolising the Greek enslavement of the Carthaginian invaders, [Nigel Wilson, "Encyclopedia of Ancient Greece", p. 7. (Routledge, 2005)] or have even been attributed to Egyptian influences. comments that "the sheer size of the temple seems to confirm the reputed extravagance of the Akragans, their love of display."

The interior was inspired by Phoenician-Carthaginian architecture; it comprised an immense triple-aisled hall of pillars, the middle of which was open to the sky. The roof was probably never completed, though the s had a full complement of sculptures. The eastern end displayed a while the western end depicted the fall of , again symbolising the Greeks' triumph over their barbarian rivals.

* [http://www.valleyofthetemples.com/Zeus_Jupiter_temple.htm The Temple of Zeus at Agrigento's Valley of the Temples]