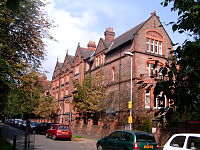 The "Main Hall" block at Dalton-Ellis Inscription above the original main entrance to the hall. The inscription reads "Let knowledge grow from more to more but more of reverence in us dwell"

Dalton-Ellis Hall is a hall of residence at the University of Manchester, Manchester, England. It is situated in the south of the city on Conyngham Road in Victoria Park, next to St Chrysostom's Church. It is close to Wilmslow Road in Rusholme. Dalton-Ellis has 279 male and female residents in catered accommodation. The hall admits both undergraduate and postgraduate students, most are undergraduate first years.

The hall comprises several named blocks built at various stages throughout its history. These include the Grade II listed[1] Main Hall, the first purpose-built hall of residence in England,[2] opened in 1882, the Nield Wing extension to Main Hall, Fiddes, Graham, Ewings, and the most recent Sutherland, built in 1994. Dalton-Ellis has a second Grade II listed block, Eaglesfield, which is not currently in use. Sunnyside houses the Hall's library and music rooms. The hall has facilities including a squash court, tennis courts, croquet lawn, and and a bar. There is also a computer cluster and a reading room. The hall also has a rich history of sporting success, with the hall fielding rugby, hockey, netball, cricket, football and croquet teams.

Dalton-Ellis Hall itself is a relatively new hall, being a product of the merger of Dalton Hall and Ellis Llwyd Jones Hall in 1987. However, the history of the two separate halls goes back to the nineteenth century.

Dalton Hall was founded by the Quakers 1876 as accommodation for students from a Quaker background attending Owens College, the forerunner to the University of Manchester. It was named after John Dalton, a scientist and Quaker in the city. At the time Owens College was one of only two institutions in the country to admit dissenters.[3] The hall moved to the building currently used as Dalton-Ellis's Main Hall in 1882. The building, like the neighbouring St Chrysostom's Church was designed by George T Redmayne. In 1892 the large Victorian house now known as Eaglesfield was bought to increase the hall's capacity. In the early years of the twentieth century the capacity was increased again with the addition of the Nield Wing extension to Main Hall, which contained more rooms and a Junior Common Room. Dalton Hall became a university hall of residence in 1958, adopting its current motto, 'trenter percenter'. Although the original intention was to admit both men and women, once the university started to admit women, this was later dropped and Dalton Hall remained a male only hall until the merger with Ellis Llywd Jones Hall in 1987.

Ellis Llwyd Jones Hall was founded in 1919, and throughout its existence was a female only hall. The hall was originally located in Old Trafford, but moved brick by brick to Victoria Park in 1981. The hall was named after Ellis Llwyd Jones, the son of Sir James Jones who donated the hall to the university in memory of his son.