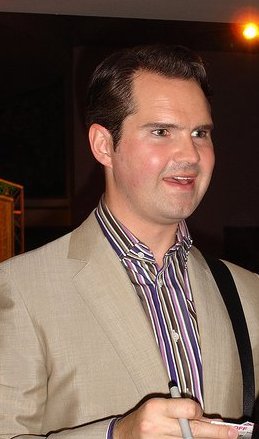 Whilst working at JC Productions with his father, Carr made his first television pilot / short film at Pinewood starring , and himself. The mockumentary, "The Colour of Funny" was essentially a vanity project for Carr. He eventually gained recognition at the , and was chosen by to host game shows such as "Distraction" and "" In 2004 he released his first stand up titled simply "Jimmy Carr Live", and the following year (2005) his second was released, "Jimmy Carr Stand Up". A third DVD "Jimmy Carr - Comedian" was released late 2007 with a fourth, "Jimmy Carr In Concert", scheduled for late 2008

Carr was a guest presenter for one edition of ""; later he joined 's team in the edition of the show first shown 23rd November 2007, chaired by with whom he “flirted” outrageously. Widdecombe later vowed "I will never appear on Have I Got News for You again."He has appeared on "" twice, as well as on 's "". He has presented many "100s" programmes for Channel 4: "100 Worst Pop Records", "", "100 Greatest Cartoon Characters", "100 people who look most like Jimmy Carr" (although this was a spoof) and "100 Scary Moments", which have made him the butt of related jokes by comedians, members of the public, and even himself.

During his guest appearance on the BBC motoring show "Top Gear", Carr set a new celebrity test track lap record on the '' segment. He was described as "the worst driver we've ever had" and "the luckiest man alive" by "Top Gear"'s test driver . His re-appearance on "Top Gear" in May 2006 placed him last in the brand new Reasonably Priced Car, with the slowest time ever. Carr also hosted a highlights edition of the show.

Carr is also prolific writer as well as performer, with writing credits including "" (C4), "" (C4) and material for Lily Savage and .

In the United States, Carr has appeared on "" twice and "" three times. In December 2007, Carr presented the fourth" Big Fat Quiz of the Year" on Channel 4, having also presented the first, second and third. Carr has also appeared on the Irish news comedy show The Panel.

He appears at the end credits of 's "Randomist" DVD, where he punches Ross on his way back to the dressing room. The joke was that Ross said in his show how Jimmy only performed for a "weak" 1 hour 20 minutes, as opposed to Ross's 2 and a half hour show. He can also be seen for a few seconds in the audience for Dara O' Briain's live DVD.

In January 2008 Carr appeared on E4 show as a hijacker for the day, and also presented the new series of .

Carr is a regular guest and interviewer on "Loose Ends" () and "The Fred MacAulay Show" (). In January 2005, Carr hosted 'It's Been a Terrible Year' — a comedy review of 2004, on . Up until July 2006, he had a Sunday morning radio show on XFM, with the mercurial comedian . The show had a strong emphasis on toilet humour, and regularly focused on discussing men that Morris 'accidentally' kissed during the previous week, despite being avowedly heterosexual. Morris also recently announced plans on air to venture into the world of male escorting, but his rates were never confirmed.

Features, of varying popularity, have included:
*Goth Classics — Item lasting about four weeks in which track 'This Corrosion' was played twice.
*Now That's What I Call A Jukebox — Long running item invented by Iain Morris where a number of songs are selected from a album, and are put to a vote. The song with the most votes is played.
*The Songs You Should Like And The Songs You Do Like (But You Like The Song You Should Like As Well) — This catchy-titled item consists of playing in sequence one credible but underrated or overlooked song (The first was 'Touch Sensitive' by The Fall) and one guilty pleasure ('s 'Just A Little Bit' followed) On the 9th of July 2006, the item was renamed 'A Song to Patronise, A Song To Sanitise.' Traditionally, items are carried out with little professionalism, presumably to match the rest of the show content.

In January 2006, Carr made a joke on Radio 4's Loose Ends, the punchline of which implied that Gypsy women smelled. [cite news|url=http://www.guardian.co.uk/uk_news/story/0,3604,1677955,00.html|title=BBC apologises for joke about Gypsy women on radio show|date= |publisher=Guardian Unlimited] Although the BBC issued an apology, Carr refused and continues to use the joke during his acts.

Jimmy is also a regular guest on The Show on .

Recently, his voice can be heard in adverts.

2004 was a successful year for Carr's live work. In 2003 he sold out an entire month's performances of his show "Charm Offensive" by the second day of the festival, and received 5-star reviews from four major newspapers. In 2004 he performed sold out solo shows at Dublin's Vicar Street, Leicester's Comedy Festival, Festival, Kilkenny Cat Laughs and the Festival along with appearances at The Bloomsbury Theatre where he filmed his first live . Also in 2004 he threatened to sue fellow comedian Jim Davidson for using a joke that Carr considered 'his'. [cite news|url=http://news.bbc.co.uk/2/hi/entertainment/3539246.stm|title=Stand-ups square up over fat joke|date= |publisher=BBC News] The matter was dropped when it became apparent that the joke in question was an old one used for decades by many different comedians. He toured the country with his show, "A Public Display of Affection", starting on at the Gulbenkian Theatre in . He also appeared at the EICC during the Edinburgh Festival in August 2005 with his "Off The Telly" show. Later on in the year, in late November, he released his second DVD "Jimmy Carr: Stand Up".

In August 2006, he commenced a new tour, "Gag Reflex", for which he won the 2006 for "Best Live Stand up". He released his third DVD, "Jimmy Carr: Comedian" in November 2007. He also performed at the 2006 festival in Montreal, as well as making a return visit to the Newbury Comedy Festival. In 2003, he was listed in "" as one of the 50 funniest acts in British comedy. In 2007, a poll on the website for 100 Greatest Stand Ups concluded "Jimmy Carr" was the 12th. A new national tour commenced in autumn 2007 named "Repeat Offender", which began at the that year.Since Autumn 2008, Carr has been touring his new show, entitled "Joke Technician". As with his previous tour, he performed many shows at the Edinburgh Festival, even adding an extra date due to ticket demand.

In March 2004, Carr's father Jim, a self-made millionaire, [ [http://www.thisislondon.co.uk/showbiz/article-23367095-details/Behind+Jimmy+Carr's+wisecracks/article.do Behind Jimmy Carr's wisecracks, This Is London] "Jim was a self-made millionaire who rose to become treasurer of computer giant Unisys in Europe and Africa before setting up his own marketing business."] was arrested by the after Jimmy Carr and his brother Colin accused their father of harassment. Mr. Carr Sr was later acquitted of all charges and awarded costs by the Court. Mr. Carr's acquittal was followed by a written apology from the CPS. Later the Metropolitan Police also apologised and paid him substantial damages in an out of court settlement of the false arrest and false prosecution charge. [ [http://news.bbc.co.uk/1/hi/england/london/5362138.stm Comedian's father 'given damages'] . BBC News. Retrieved on , .]

Jimmy is unrelated to the comedian . He said in an interview in June 2007 that "I am getting tired of this. I am not his brother and I'm not older. The jokes are getting old."Fact|date=May 2008 In an edition of Big Fat Quiz Of The Year 2007, he made light of this by saying as a joke "If you've never watched Channel 4 before, then hello! I'm Jimmy Carr. Basically, I run the place with my brother Alan."

During an appearance on BBC's "Would I Lie to You?" (Series 1, Episode 3), Jimmy Carr revealed it as true that he lost his virginity at 26 years of age, mainly due to some strict religious beliefs he held until that age.

He is engaged to long-term girlfriend, Karoline Copping.

On , , Carr, together with advertising copy-writer friend Lucy Greeves, released a book called "The Naked Jape" (the U.S. version, re-titled "Only Joking", was released on , ), a discussion of the art and history of joking. It includes a selection of over 400 of the best jokes ever told.

On , , Jimmy announced plans to become the first major comedian to perform in the virtual reality world of . This was confirmed on his webpage on , , and a competition launched to choose a select audience from the list of his MySpace friends. [ [http://news.bbc.co.uk/1/hi/entertainment/6227869.stm BBC Story on Carr's "Second Life" performance.] ]

Carr's Second Life show took place on Saturday, at 7pm, at Adam Street Bar and Members Club in central London. Fifty MySpace friends made up his live audience, with 100 virtual attendees in Second Life itself. The show was enjoyed by both sets of audiences, with excellent feedback received on both Jimmy's MySpace profile and within Second Life.

Carr hinted at the show that he may perform future shows in Second Life.

In March 2007, Laura Jackson from the Guinness Book of World Records confirmed that Jimmy had obtained the world record for being the first comedian in , following on from his show. Fact|date=June 2007