Mutual Street Arena, initially called Arena Gardens or just the Arena, was an ice hockey arena and sports and entertainment venue in Toronto, Ontario. From the time period of 1912 until 1931, with the opening of the Maple Leaf Gardens, it was the premier site of ice hockey in Toronto, being home to teams from the National Hockey Association (NHA), the National Hockey League (NHL), the Ontario Hockey Association (OHA) and the International Hockey League (IHL). It was the first home of the Toronto Maple Leafs, who played at the arena under various names for their first 13.5 seasons. The Arena Gardens was the third rink in Canada to feature a mechanically-frozen or 'artificial' ice surface, and for eleven years was the only such facility in eastern Canada. In 1923, it was the site of the first radio broadcast of an ice hockey game, the first radio broadcast of an NHL game, and the first broadcast of an ice hockey game by long-time broadcaster Foster Hewitt.

The Arena was also used for musical concerts, gatherings and other sporting events, including professional boxing, cycling, wrestling and tennis. In 1962, it was later converted to a curling club and roller skating rink known as The Terrace. The building was demolished in 1989 and the Cathedral Square residential complex and Arena Gardens municipal park now occupy the site. It was located on Mutual Street, just south of Dundas Street East and one block east of Church Street in downtown Toronto.

It was constructed for a reported cost of $500,000 and opened in 1912.[2] It was built on the site of the Mutual Street Rink, used primarily for curling and ice skating between Dundas Street and Shuter Street. At the time, it was billed as the largest indoor arena in Canada and held about 7,500 for hockey. The rink was owned by the Toronto Arena Company, organized September 19, 1911 with Sir Henry Pellatt as president, Lol Solman as managing director, and directors Aemilius Jarvis, Joseph Kilgour, T.W. Horn, R.A. Smith, and Col. Carlson. There were two other directors from Montreal. W. J. Bellingham was the initial manager.[3]

The Arena opened with a performance by Nathan Franko's Orchestra on October 7, 1912, supporting a recital by Alice Neville, soprano of the Metropolitan Opera, tenor Orville Harold and a company of opera singers from the Boston Opera Company organized by Neville. It was the first of a series called the Toronto Music Festival.[4] Entrances to the various blue and red seating sections were indicated by corresponding blue and red lights on the outside of the building.[4] It was followed the next day by a recital by Johanna Gadski with Franko's orchestra.[5] The festival continued all week, concluding on October 12 with a variety show headlined by Marie Dressler.[6]

Arena Gardens was initially home to two new teams in the National Hockey Association (NHA): the Toronto Hockey Club and the Tecumseh Hockey Club. Delays in construction meant that the teams could not play in the 1911-12 season, as was originally scheduled. The 12 miles (19 km) of piping for the artificial ice was installed improperly and had to be reinstalled in December 1912.[7][8][9] The first professional ice hockey game in the building was on December 21, 1912, an exhibition between the Montreal Canadiens and Montreal Wanderers.[10] Sprague Cleghorn was suspended for four weeks and fined $65 by the NHA for assaulting the Canadiens' Newsy Lalonde in the game.[11]The first official game was on December 25, 1912, a game between the Canadiens and the Torontos.[12] Upon the suspension of the NHA in 1917, the professional franchise of the new National Hockey League (NHL) for Toronto was operated by the Toronto Arena itself. The franchise was operated by the Arena for two years before being sold to become the Toronto St. Patricks. The St. Pats became the Toronto Maple Leafs in 1927, and played at Arena Gardens until the construction of Maple Leaf Gardens in 1931. Until 1923, the Arena was the only facility east of Manitoba with artificial ice-making capability. With this in mind, the St. Pats often let other teams use the Arena as a neutral site during the early and late months of the season, when it was usually too warm for proper ice.[13]

The year 1922 saw the first professional wrestling bout at the Arena, a bout between former world champion Stanislaus Zbyszko and Canadian champion George Walker. Professional wrestling would continue at the Arena until 1938. Promoter Ivan Mickailoff began promoting weekly shows in 1929. Some of the names that Michailoff presented at the Arena included Strangler Lewis and Toots Mondt, as well as reigning world champions Gus Sonnenberg, Ed Don George, Henri Deglane, Jim Londos, Ali Baba, Vic Christie, Everett Marshall and Billy Weidner, who all defended their titles at the Arena.[14]

On February 8, 1923, the first radio broadcast of an ice hockey game was made from the Arena by Toronto Star's CFCA radio station. Norman Albert did the play-by-play of the third period of a game between North Toronto and Midland, won by North Toronto 16–4.[15] Later that season, Foster Hewitt made his first radio broadcasts from the Arena, also on CFCA. A game on February 14, 1923 featured the Toronto St. Pats and the Ottawa Senators, and is the first NHL game to be broadcast on radio.[16] The Stanley Cup Final was played at Arena Gardens four times: 1914, 1918, 1920 and 1922. Arena Gardens also hosted the Memorial Cup finals nine times from 1919 to 1931. The Gardens also hosted the Allan Cup final series.[17] A 1931 game between the Montreal Canadiens and the Maple Leafs was filmed by the National Film Board of Canada.[18] 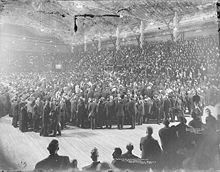 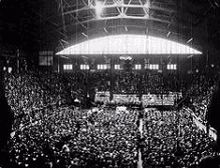 The building was also used for mass assemblies. An assembly was held for Sir Wilfrid Laurier in 1913 by the Liberal Party of Canada. On June 10, 1925, this building was used as the venue for the inaugural service of the United Church of Canada, which united the Presbyterians, the Methodist Church of Canada, and the Congregational Union of Canada. On October 9, 1936, it was the site of a mass assembly by the Communist Party of Canada.

After the Maple Leafs left in 1931, the building no longer was a venue for professional ice hockey, but remained opened as a venue for sports and entertainment. Some of the other sports included bicycle racing, professional boxing and tennis.[12] By 1934, revenues did not keep up with interest on bonds on the property, property taxes and the expenses of operating the arena.[19] The bondholders made it known that the building was for sale.[20] By 1937, with $200,000 of bonds in default, and the Arena in default of 1933 and 1934 taxes of nearly $16,000, and a similar amount estimated for 1936 and 1937, the Arena was listed for sale by the City of Toronto.[21]

In 1938, the Arena was leased to William Dickson who turned it into a recreation facility offering ice skating in winter and roller skating in summer. The name was changed that year to the Mutual Street Arena.[12] The Glenn Miller big band played at the Arena in January 1942, Miller's only appearance in Toronto. Frank Sinatra made his first appearance in Toronto here in 1949.[22] Roller hockey was introduced to the Arena in the late 1940s.[23] The city's first boat show was held in 1954. The Melody Fair theatre-in-the-round operated at the Arena in 1954.[12]

Dickson bought the building in 1945 and it remained in the family for the next 43 years. The arena was renovated for $3 million in 1962, adding eighteen curling sheets, a parking garage and a new facade.[12] The Arena was renamed The Terrace, a name it kept until it was sold in 1988. It closed its doors on April 30, 1989 and was demolished a few months later. The site was converted into a residential development with some of the site reserved for a city park. The Terrace name was retained for one of the residential buildings. In May 2011, the name of the city park on the site was changed from Cathedral Square Park to Arena Gardens.[24]