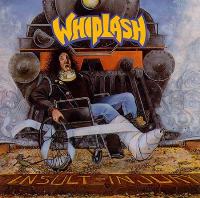 "Insult to Injury" is the third full-length studio album from band, Whiplash. It follows 1987's "". It was six years before a largely changed line-up recorded a new album, "".

This album saw the addition of a vocalist, Glenn Hansen, as Tony Portaro concentrated on guitar duties instead of the dual role he had performed on previous albums.

* It seems that the original album title may have been "Rape of the Mind", as Tony Portaro says in a live performance video recorded at Copenhagen.