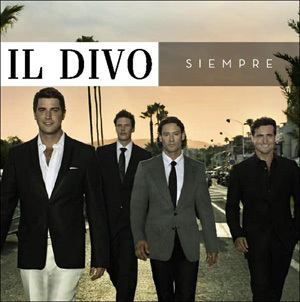 "Siempre" is the fourth album of the vocal group .

"Siempre" ("Always" in Spanish) will have a total of 12 songs for which they have collaborated with and & in the production. The songs in this album include new arrangements of "" (originally by ), "Caruso", "" (made famous by ), "Somewhere", "", a new version of the song "Music" from the 1970s renamed "Musica", and re-arranged by its original British composer John Miles. The album also features a cover of ' "" translated into the Spanish "Un Regalo Que Te Dio La Vida" (which literally means "A Gift That Life Gave You"). This album includes the Spanish adaptation by the famous Mexican composer and musician of "Una Noche" ("One Night, Spanish). Other original songs in this album include "La Vida Sin Amor" ("Life without Love," Spanish), and "Come Primavera" ("Like Spring," Italian).