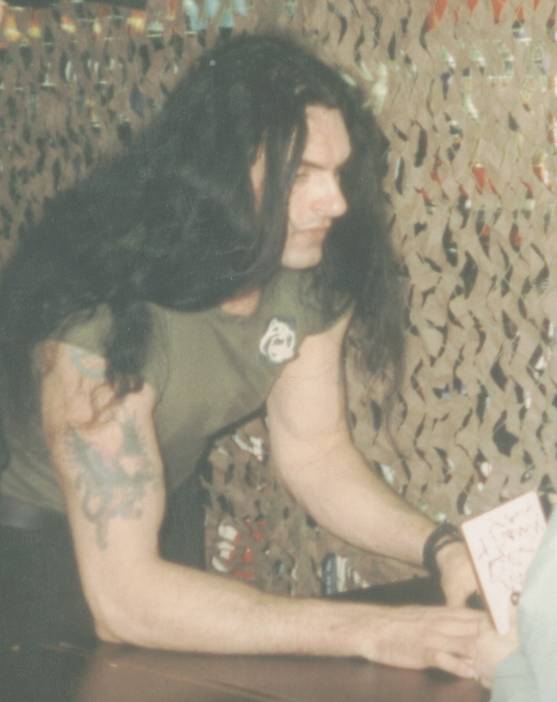 Peter Steele (born Peter Ratajczyk on in , U.S.) [ [http://www.imdb.com/name/nm1627592/bio#top IMDb Profile] ] is the lead singer, bassist, and composer for the gothic-doom band . At 6' 6", Peter's low, bass heavy voice is one of the most recognizable features in 's music. Before joining Type O Negative, he played for the metal group Fallout and the thrash band Carnivore.

Steele is equally known for his dark humor and ; he has occasionally received psychiatric treatment for the latter. There were unconfirmed rumors at one point of Steele's death after the band [http://www.typeonegative.net website] posted an image of a tombstone bearing his name and the dates 1962-2005. [ [http://www.roadrunnerrecords.com/blabbermouth.net/news.aspx?mode=Article&newsitemID=36711#top Roadrunner Records Article] ] According to an article dated , 2005, Steele was not dead; the gag was related to their fresh signing with SPV Records. The website discontinued the tombstone picture in October 2005. However, Steele had indeed disappeared for an extended time with no explanation from the band or management. Rumors of his death, terminal illness, and other speculations increased until the mystery was dispelled on the 2006 DVD "Symphony for the Devil". Included in this DVD is an interview in which Steele briefly mentions his incarceration in Riker's Island and "the psych ward at King's County Hospital", both stints apparently caused by his heavy , for which he also served time on . Additionally, Steele was admittedly very bitter towards his sisters for what he perceived to be a betrayal of sorts that led to his jail time. This situation was incorporated into "Tripping A Blind Man" on Type O Negative's 2007 album, "Dead Again".

Steele notoriously appeared as a nude centerfold of "" in 1995 [cite book | title=Metal: The Definitive Guide | year=2007 | author=Garry Sharpe-Young | pages=293] . After finding out via bandmate Kenny Hickey's contacts that only 23% of the magazine subscribers were female, Steele somewhat regretted the decision and later made light of it on "" with the song "I Like Goils". In a 2007 interview, Steele reflected on the posing as merely a naïve publicity stunt. [ [http://www.decibelmagazine.com/features/apr2007/typeonegative.aspx Peter Steele and Josh Silver Interview - Decibel Magazine April, 2007] ]

Steele has also revealed in recent interviews that Type O Negative's split from , aside from a poor offer, had to do with an allegedly unauthorized release of a "Best Of" compilation. [ [http://youtube.com/watch?v=0p5qtdQ5ow4#Top Steele discussing Touring and Roadrunner] ] Additionally, he later revealed on 's "" that the new alliance with SPV Records is probably his favorite thing about "Dead Again" from a production standpoint. [ [http://headbangersblog.mtv.com/2007/07/06/5-days-of-type-o-negative-alive-with-dead-again/ MTV Headbangers Blog] ] In April 2007, Steele revealed that he began identifying himself as in recent years, after decades of self-professed . In an interview with "Decibel" magazine, Steele explains “There are no atheists in foxholes, they say, and I was a foxhole atheist for a long time. But after going through a midlife crisis and having many things change very quickly, it made me realize my mortality. And when you start to think about death, you start to think about what’s after it. And then you start hoping there is a God. For me, it’s a frightening thought to go nowhere. I also can’t believe that people like Stalin and Hitler are gonna go to the same place as Mother Teresa.” [ [http://www.decibelmagazine.com/features/apr2007/typeonegative.aspx Peter Steele and Josh Silver Interview - Decibel Magazine April, 2007] ]