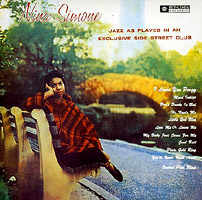 "Little Girl Blue" is the debut album by singer/pianist/songwriter (1933–2003) for . It was also released as "Jazz As Played in an Exclusive Side Street Club". Nina was in her early twenties at the time of this album, and still aspiring to be a classical concert pianist. She immediately sold the rights for the songs on this album to Bethlehem for 3000 dollars. In the end, this cost her royalty profits of more than a million dollars. [cite book |last= Simone|title= I Put a Spell on You |pages= p. 60] Nina was not satisfied with the lack of effort the record company took in promoting her, and after this album she went over for a long relationship with . The album "" was released after she left, and comprised of songs that were left over from the "Little Girl Blue" recording session.

Information about songs on this album

* "", from 's opera . This was the song that started Simone's career. The single became her only top 40 hit in the .
* "", also features on "".
* "Love Me or Leave Me" featured on the soundtrack of "" (1998), also features on "".
* "Plain Gold Ring" was later covered by .
* "" was Simone's biggest hit. It was one of the last songs she recorded during the session, because the record label wanted an uptempo song to finish with. The fairly obscure song became a hit when it was re-released in 1987, after it had featured in a UK commercial for the no.5 perfume. It helped the almost forgotten Simone back into the limelight.