"Merry Xmas Everybody" is a 1973 song by the English rock band Slade. Written by lead vocalist and guitarist Noddy Holder and bassist Jim Lea, and produced by Chas Chandler, it was the band's sixth number-one single in the UK. It earned the UK Christmas Number One slot in December 1973, beating another Christmas-themed song, Wizzard's "I Wish It Could Be Christmas Everyday", which reached fourth place. By mid-January it was still at number one; it stayed in the UK Singles Chart well into February 1974.

Based on melodies from discarded songs written six years before, "Merry Xmas Everybody" was Slade's best-selling single, released at the peak of their popularity, and sold over a million copies upon its first release. It is Slade's last number-one single, but by far their most successful. It has been released during every decade since 1973, and has been covered by numerous artists like Wilbasound, ensuring it remains popular. In a 2007 poll, "Merry Xmas Everybody" was voted the UK's most popular Christmas song.

The single was certified UK Platinum by BPI in December 1980.[1]

According to the Fan Club Newsletter for January and February 1974, the album was rewarded a Silver Disc for pre-order sales, even before the single's release. Within the first week of release, the single had sold 500,000 copies.[2][3]

Also, according to the same newsletter, "Merry Xmas Everybody" was in such big demand that Polydor records had to make special arrangements to have 250,000 discs sent from Los Angeles, as well as 30,000 copies a day they were receiving from Germany.[3][4]

By 1973 Slade were one of the most popular bands in Britain, having achieved two number one singles—"Cum On Feel The Noize" and "Skweeze Me Pleeze Me"—in three months. These singles had both entered the charts straight at number one, a rare feat at the time as this was the first occurrence since The Beatles hit number one in 1969 with Get Back.

The band and their record company, Polydor, decided to produce a Christmas hit. For inspiration Slade members Noddy Holder and Jim Lea looked at previous material they had written.[5] Lea recalled a melody and verse he came up with while showering, and Holder recalled a song he had discarded in 1967, which he had written when the band were named the N'Betweeners. It was entitled "Buy Me a Rocking Chair", and was Holder's first solo work.[6][7] Holder used the melody of this song for the chorus, and Lea's melody became the verse. After an evening out drinking, Holder worked through the night at his mother's house in Walsall to write the lyrics, which he completed in one draft.[5][7] In a 2007 interview with the Daily Mail, he spoke about the song's creation:

We'd decided to write a Christmas song and I wanted to make it reflect a British family Christmas. Economically, the country was up the creek. The miners had been on strike, along with the grave-diggers, the bakers and almost everybody else. I think people wanted something to cheer them up – and so did I. That's why I came up with the line 'Look To The Future Now It's Only Just Begun'. Once I got the line 'Does Your Granny Always Tell You That The Old Ones Are The Best', I knew I'd got a right cracker on my hands.[8]

Holder showed the lyrics to Lea and Slade's manager, Chas Chandler, and played the song for them on acoustic guitars. Both believed the song would be a success. Slade then set off on a sell-out tour. Ten weeks before the song was recorded, drummer Don Powell was injured in a car accident. His girlfriend Angela Morris was killed, and Powell remained in a coma for almost a week. After his eventual recovery, he was able to join the band to record the song.[8] In 2009, PRS for Music announced that up-to forty-two percent of the world's population could have listened to the song.[9][10][10]

The song was recorded in the late summer of 1973, during Slade's east coast US tour. Despite its association with the British working class, it was actually recorded at the Record Plant in New York,[5] where, in an adjoining studio, musician John Lennon was working on his album Mind Games. Lennon planned to use a harmonium, which Slade's producer Chas Chandler decided the song needed.[11] "Merry Xmas Everybody" took five days to finish, but the band disliked the first completed version.[7] It ended up being rerecorded, with the corridor outside used to record the chorus,[5] as it provided an appropriate echo.[7]

"Merry Xmas Everybody" opens with the introduction using a B♭ triad, a 7-second melody consisting of a harmonium and bass.[12] The first verse then emerges in G major.[13] This is followed by the bridge then the chorus. This sequence is then repeated once, and followed by a solo part sung by Holder (What will your daddy do/if he sees your mamma kissin' Santa Claus). The first sequence is then repeated, with the final chorus sung four times. On the last rendition, Holder screams out "It's Christmas!" after the Everybody's having fun line and over the rest of the chorus; the final part decreases its tempo and fades out to a D major chord played by the harmonium. 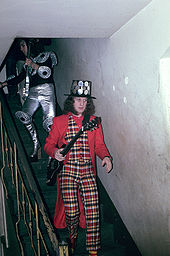 Before its release, "Merry Xmas Everybody" received about half a million advance orders. 350,000 copies were bought upon its release on 7 December 1973.[8] On 15 December it became the third song by Slade to enter the UK Singles Chart at number one (all in 1973) and the sixth number one of their career,[6] and became the fastest selling single in the UK. Polydor, Slade's record label, were forced to use their French pressing plant to keep up with the demand, and the song eventually went on to sell over one million copies,[8] becoming the Christmas number one of 1973, beating another Christmas-themed song, "I Wish It Could Be Christmas Everyday" by Wizzard.[14] "Merry Xmas Everybody" remained number one until mid-January, and stayed in the charts for a total of nine weeks.[15] That it remained in the charts after Christmas caused confusion for Holder, who wondered why people continued to buy it.[7]

For the fan club newsletter in 1979, Jim Lea spoke of the b-side "Don't Blame Me", "Don't Blame Me was a time-filler, I think that it was created as that. When it was used as a b-side, we didn't even know it was being used, it was chosen by the offices. We were in America recording the Christmas single, there was a rush to choose what to put on the back of it, and that track happened to be used."[16]

The song was featured in the 1989 Jive Bunny track "Let's Party" where The Sun newspaper stated Slade received £20,000 for the featuring of the track. A Slade spokeman at the time said this was exaggerated.[17][18]

No promotional video was created for the single. Bassist/co-writer Lea stated that no film was needed for the single as the band absolutely blitzed the T.V. over Christmas, appearing on shows as bizarre as 'The Lee Dawson Christmas Show'. Lea remembered that on the Tuesday that the single went straight to number one in the charts, the band were filming the 'Lift Off' TV show in Manchester. Apparently the band drove around the streets of the city to check that they were number one before arriving at the studios. When they arrived, Roy Wood's girlfriend of the time Ayshea Brough, said that the next few weeks would be interesting to see who had the Christmas number one out of Slade, Wizzard and Elton John. Slade then surprised her by saying that they were there already.[20][21]

Upon release, Record Mirror magazine reviewed the single, "When Slade get hold of a Christmas song, inevitably it's something different. They enquire whether the fairies keep Santa sober for a day and granny says old songs are the best, then gets up and rock rock and rolls with the rest and what will daddy do when he sees mama kissing Santa Claus. Lyrics courtesy Holder and Lea, that well known tunesmith duo, here on a gentler, more melodic, less rumbustious, guaranteed number one than usual. Flip is Don't Blame Me. I don't. It's blameless rock - chart certain."[22]

Disc Magazine wrote "There is no doubt that this slice of festive cheer will be a huge monster hit: the main question is whether it'll go straight to number one..."[23][24]

Sounds magazine wrote "Noddy is in particularly fine voice and there's also some super-neat thumping bass. "Look to the future now, it's only just begun" suggests Noddy, and if Slade's future holds more singles of this standard then I look forward to the new year."[23][25]

Record Mirror magazine reviewed the re-release of the single in 1978. "And dirt we have. Or grit really. Not only that, but five year old grit, cos this first saw you through the Xmas of 1973. Wonder how many copies they had left over that they're still releasing it. A hit of course but a shame they couldn't do something new cos I think they're great."[26]

"Merry Xmas Everybody" is a perennial feature, and is played regularly at UK nightclubs around Christmas. It is included on numerous Christmas-themed compilation albums, and has been featured in several of Slade's subsequent compilation albums.[5] Despite the song's popularity it became the band's last number-one hit.[14] The song charted in every year in the early half of the 1980s, and again in 1998 and 2006,[27] and is a regular feature of television and radio playlists in the Christmas season.[14] However, some venues have removed it from their Christmas playlist because it was overplayed, and became "irritating" to some people.[28][29] Despite this negative response, Peter Buckley describes the song in The Rough Guide To Rock as "arguably the best Christmas single ever";[30] this opinion was reflected in a 2007 poll carried out by MSN Music, where it was voted the UK's most popular Christmas song.[31]

It can be heard playing in the background during four episodes of the British television programme Doctor Who: "The Christmas Invasion" (2005) (where it is the song being played in Mickey Smith's garage), "The Runaway Bride" (2006) (in which it is the song that is being played at Donna Noble's first wedding reception; Donna and the Doctor end up arriving and cutting off the song after the first verse), "Turn Left" (where it is heard on a car radio), and "The End of Time" (2009).

Noddy Holder has referred to the song as his pension scheme, reflecting its continuing popularity [32].

The song has been covered by various artists. Notable covers include a version by 4 Skins, as part of the Bollocks to Christmas compilation album.[33] Others include a 1990 version by the British gothic rock band The Mission, performing under the name Metal Gurus.[34] A 1998 dance remix by Swedish dance duo Flush was a UK top 30 entry.[35] A version was performed live by the girl group Spice Girls in December 1999, at all eight concerts on their Christmas in Spiceworld tour.[36] An acoustic version was performed on The Royle Family's Christmas Special episode, by guitarist Noel Gallagher.[37] Irish band Westlife sang this song live on 2000s. British artist Tony Christie has also covered the song.[38] In 2010, Glenn Gregory from electronic band Heaven 17 performed an acoustic version of the track on Paul Morley's Christmas Songs.[39]