A mid-air collision is an aviation accident in which two or more aircraft come into contact during flight. Owing to the relatively high velocities involved and any subsequent impact on the ground or sea, very severe damage or the total destruction of at least one of the aircraft involved usually results. The chance of surviving a major mid-air collision is virtually zero in the absence of ejector seats and parachutes, as indicated below, although occasionally this rule may be violated (as on 1965 Carmel mid-air collision).

The potential for a mid-air collision is increased by miscommunication, error in navigation, and deviations from flight plans. Albeit a rare occurrence due to the vastness of open space available, collisions often happen near or at airports, due to the large volume of aircraft and closer spacing compared to general flight. 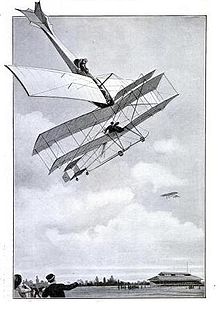 The first recorded collision between air-planes occurred at the 'Milano Circuito Aereo Internazionale' meeting held between 24 September and 3 October 1910 in the city of Milan, Italy. On 3 October Rene Thomas of France in an Antionette monoplane collided with Captain Bertram Dickson of the British army in a Farman biplane by ramming him in the rear.[1] Both pilots survived but Dickson was so badly injured he never flew again.[2][3][4]

Efforts to prevent military/civilian collisions in the United States

In 2005, as part of an effort to reduce such military/civilian mid-air collisions in U.S. airspace, the Air National Guard Flight Safety Division, led by Lt Col Edward Vaughan, used the Disruptive Solutions Process to create the See and Avoid web portal. In late 2006, the U.S. Defense Safety Oversight Council (DSOC) recognized and funded the site as its official civil/military midair collision prevention website, with participation by all the services.[citation needed] 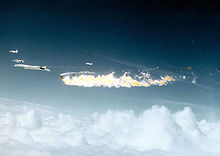