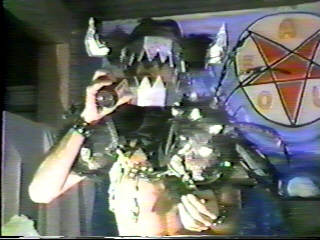 In the original lineup in 1985, Jaws Of Death and were two different characters. Jaws of Death (played by guitarist Steve Douglas) wore a crude version of the familiar trap jaw the current wears, while (Chris Bopst) played bass and wore a simple open-face piece of spiked headgear. After a few lineup changes, Douglas would return to the band as for the recording of 's first album , only to be replaced by shortly after.