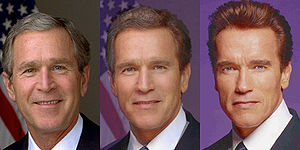 Three frames form a morph from George W. Bush to Arnold Schwarzenegger showing the mid-point between the two extremes

Morphing is a special effect in motion pictures and animations that changes (or morphs) one image into another through a seamless transition. Most often it is used to depict one person turning into another through technological means or as part of a fantasy or surreal sequence. Traditionally such a depiction would be achieved through cross-fading techniques on film. Since the early 1990s, this has been replaced by computer software to create more realistic transitions.

Though the 1986 movie The Golden Child implemented very crude morphing effects from animal to human and back, the first movie to employ detailed morphing was Willow, in 1988. A similar process was used a year later in Indiana Jones and the Last Crusade to create Walter Donovan's gruesome demise. Both effects were created by Industrial Light and Magic using grid warping techniques developed by Tom Brigham and Doug Smythe (AMPAS).[1]

In 1985, Godley and Creme created a primitive "morph" effect using analogue cross-fades in the video for "Cry". The cover for Queen's 1989 album The Miracle featured the technique to morph the four band members' faces into one gestalt image. In 1991, morphing appeared notably in the Michael Jackson music video Black Or White and in the movies Terminator 2: Judgment Day and Star Trek VI: The Undiscovered Country. The first application for personal computers to offer morphing was Gryphon Software Morph on the Macintosh. Other early morphing systems included ImageMaster, MorphPlus and CineMorph, all of which premiered for the Commodore Amiga in 1992. Other programs became widely available within a year, and for a time the effect became common to the point of cliché. For high-end use, Elastic Reality (based on MorphPlus) saw its first feature film use in In The Line of Fire (1993) and was used in Quantum Leap (work performed by the Post Group). At VisionArt Ted Fay used Elastic Reality to morph Odo for Star Trek: Deep Space Nine. Elastic Reality was later purchased by Avid, having already become the de facto system of choice, used in many hundreds of films. The technology behind Elastic Reality earned two Academy Awards in 1996 for Scientific and Technical Achievement going to Garth Dickie and Perry Kivolowitz. The effect is technically called a "spatially-warped cross-dissolve". The first social network designed for user-generated morph examples to be posted online was Galleries by Morpheus (morphing software).

In Taiwan, Aderans, a hair loss solutions provider, did a TV commercial featuring a morphing sequence in which people with lush, thick hair morph into one another, reminiscent of the end sequence of the Black or White video.

In the early 1990s computer techniques that often produced more convincing results began to be widely used. These involved distorting one image at the same time that it faded into another through marking corresponding points and vectors on the "before" and "after" images used in the morph. For example, one would morph one face into another by marking key points on the first face, such as the contour of the nose or location of an eye, and mark where these same points existed on the second face. The computer would then distort the first face to have the shape of the second face at the same time that it faded the two faces. Later, more sophisticated cross-fading techniques were employed that vignetted different parts of one image to the other gradually instead of transitioning the entire image at once. This style of morphing was perhaps most famously employed in the video that former 10cc members Kevin Godley and Lol Creme (performing as Godley & Creme) produced in 1985 for their song Cry. It comprised a series of black and white close-up shots of faces of many different people that gradually faded from one to the next. In a strict sense, this had little to do with modern-day computer generated morphing effects, since it was merely a dissolve using fully analog equipment.

Morphing in the future

Morphing algorithms continue to advance today and many programs can automatically morph images that correspond closely enough with relatively little instruction from the user. This has led to the use of morphing techniques to create convincing slow-motion effects where none existed in the original film or video footage by morphing between each individual frame using optical flow technology. Morphing has also appeared as a transition technique between one scene and another in television shows, even if the contents of the two images are entirely unrelated. The algorithm in this case attempts to find corresponding points between the images and distort one into the other as they crossfade. In effect morphing has replaced the use of crossfading as a transition in some television shows, though crossfading was originally used to produce morphing effects.

Morphing is used far more heavily today than ever before. In years past, effects were obvious, which led to their overuse. Now, morphing effects are most often designed to be seamless and invisible to the eye.

Morphing is sometimes used to combine adult pornography and non-pornographic images of children into child pornography. In the United States the Child Pornography Prevention Act of 1996 was passed to criminalize these morphed images,[2] but the Supreme Court struck down CPPA in 2002 in Ashcroft v. Free Speech Coalition for being overly broad.