Over My Dead Body (novel)

Over My Dead Body (novel)

Over My Dead Body is the seventh Nero Wolfe detective novel by Rex Stout. The story first appeared in abridged form in The American Magazine (September 1939). The novel was published in 1940 by Farrar & Rinehart, Inc.

— A scandalized Archie ragging Wolfe, in Over My Dead Body, chapter 2

When a Montenegrin female comes to the brownstone to ask for help, a minor rumpus about stolen diamonds at a fashionable fencing academy quickly develops into international intrigue and murder. Nero Wolfe's long buried and jealously guarded past comes to light.

In Over My Dead Body Rex Stout begins to explore Wolfe's Montenegrin background. By 1939, of course, the Wolfe/Goodwin books had become an established series but Wolfe's youth had yet to be clarified. Stout starts to do so in this book by ringing in a number of European visitors, including some from Montenegro; the backdrop is the maneuvers of the Axis and Allied powers to dominate Yugoslavia. In the first chapter Wolfe tells FBI Agent Stahl that he was born in the United States — a declaration at odds with all other references in the corpus. Stout's authorized biographer John McAleer explained the reason for the anomaly:

Rex told me that even in 1939 Wolfe was irked by the FBI's consuming curiosity about the private business of law-abiding citizens. In consequence, Wolfe felt under no constraint to tell the truth about himself when interrogated by Stahl. There was, however, another reason for Wolfe's contradictory statements about his place of origin. Rex explained: "Editors and publishers are responsible for the discrepancy. ... In the original draft of Over My Dead Body Nero was a Montenegrin by birth, and it all fitted previous hints as to his background; but violent protests from The American Magazine, supported by Farrar & Rinehart, caused his cradle to be transported five thousand miles. ... I got tired of all the yapping, and besides it seemed highly improbable that anyone would give a damn, or even, for that matter, ever notice it."[1] 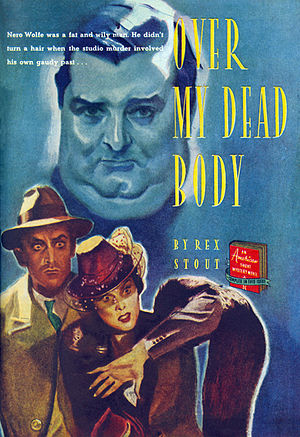 Carl Mueller illustrated the abridged version of
Over My Dead Body for The American Magazine
(September 1939), the first appearance of the
Nero Wolfe mystery.

Carla Lovchen and Neya Tormic, two young women from Montenegro, come to Wolfe's office asking his assistance. Miss Tormic has been accused, falsely she says, of the theft of diamonds from the locker room of a fencing studio where she works. She cannot afford Wolfe's large fees, but Miss Tormic has a document showing that Wolfe adopted her when she was an infant, at the time of World War I. Wolfe has not seen her since.

Wolfe undertakes to investigate Miss Tormic's predicament, and sends Archie to the fencing studio. At the studio, Archie is gathering information when a body is discovered: that of a British citizen who has just provided Miss Tormic with an alibi for the diamond theft. The body has been pierced by an épée – but because of the rapier's blunt point, this is thought at first to be an impossibility.

After the police arrive, Archie notices that an object has been stashed in the pocket of his topcoat. Concerned that he's being set up, Archie escapes the premises without examining the object. Back at Wolfe's house, the object is found to be a bloodstained fencing glove, in which a col de mort has been wrapped. A col de mort, it turns out, is a sharp metal fitting that can be attached to the end of an épée, so as to turn a relatively safe weapon into a deadly one.

Wolfe and Archie conceal the glove and the fitting in a loaf of Italian round, which Fritz covers with chocolate icing and keeps in the refrigerator. Subsequently, the evidence is turned over to Inspector Cramer, who decides that his best chance to solve the murder is to camp out with Wolfe and keep an eye on him. Uncharacteristically, Wolfe makes no objection.

A patron of the studio, Madame Zorka, phones Wolfe to tell him that she saw someone conceal the glove in Archie's coat and threatens to inform the police. Archie arranges to pick her up for a conversation with Wolfe, but Zorka's gone missing.

Yet another murder ensues, this time of a thinly-disguised Nazi who contributes to Miss Tormic's alibi. After a considerable amount of flailing about, Wolfe manages to get the dramatis personae together in his office where, in the manner that became standard in the series, he exposes the murderer and motive.

In most Nero Wolfe novels and novellas there is an unfamiliar word, usually spoken by Wolfe. Over My Dead Body contains at least four examples, including the following:

Some material in Over My Dead Body would in later decades be thought inappropriate at the very least. There is a minor character who is described in a way that brings Steppin Fetchit to mind. And Stout puts seven consecutive ethnic epithets in Cramer's mouth, at least five of which would in later years be considered offensive[3].

The following excerpt from Over My Dead Body was used as the quotation in a New York Times[4] Sunday acrostic: "When an international financier is confronted by a holdup man [with a gun], he automatically hands over not only his money and jewelry but also his shirt and pants, [because] it doesn't occur to him that a robber might draw the line somewhere."[5] (The bracketed words did not appear in the acrostic.) 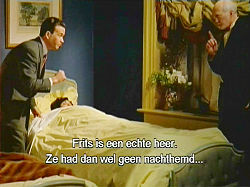 An adaptation of Over My Dead Body concluded the first season of the A&E TV series A Nero Wolfe Mystery (2001–2002). Sharon Elizabeth Doyle and Janet Roach wrote the teleplay for the episode, which was directed by Timothy Hutton. "Over My Dead Body" made its debut in two one-hour episodes airing July 8 and 15, 2001, on A&E.

"Over My Dead Body" is one of the Nero Wolfe episodes released on Region 2 DVD in the Netherlands by Just Entertainment, under license from FremantleMedia Enterprises. A Nero Wolfe Mystery — Serie 2 (2010) was the first DVD release of the international version of the episode, which presents "Over My Dead Body" as a 90-minute film with a single set of titles and credits. Included is a brief scene in which Archie and Fritz put Madame Zorka to bed in the south room. "Fritz is a real gentleman," Archie says in voiceover. "She may not have arrived with a nightie or a toothbrush, but for the honor of the house, by golly, she got orchids." The Netherlands release has optional Dutch subtitles and, like the A&E DVD release, presents the episode in 4:3 pan and scan rather than its 16:9 aspect ratio for widescreen viewing.[11]