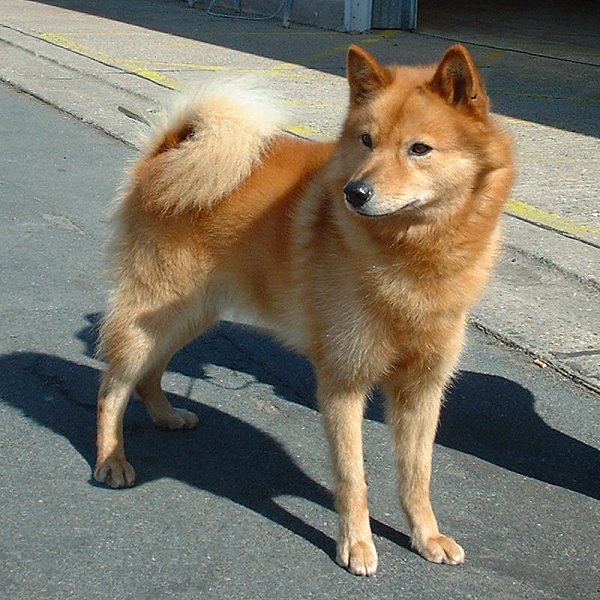 image_caption =
kcukgroup = Hound
kcukstd = http://www.thekennelclub.org.uk/item/25
name = Finnish Spitz
nzkcgroup = Hounds
nzkcstd = http://www.nzkc.org.nz/br460.html
ukcgroup = Northern Breed
ukcstd = http://mail.ukcdogs.com/UKCweb.nsf/80de88211ee3f2dc8525703f004ccb1e/e955265a8213d3688525704a00460d36?OpenDocument A Finnish Spitz (: "Suomenpystykorva") is a breed of originating in . The breed is thought to be an old one, bred as a hunting dog. It is a "bark pointer", indicating the position of game by barking to attract the hunter's attention. It has been used mostly to bark at game that flees into trees, such as s, s, and s, but it serves well also to hunt and elk. Some individuals have been known to go after even a , despite the dog's small size. In its native country, the breed is still mostly used as a hunting dog, but as it is very friendly and loves children, in other countries it serves mainly as a house pet. The Finnish Spitz has been the national dog of Finland since 1979.

The Finnish Spitz has a square build, meaning that the length of the body is the same, or slightly shorter than the height of the withers to the ground. The length of the body is measured from the point of the shoulder or forechest in front of the withers to the rump, giving a truly square dogs a short back. Bitches are usually a little longer in the back. Both dogs and bitches should appear slightly longer in the leg. The Finnish Spitz is a double coated breed but the outer coat should not exceed 2 1/2 inches at the ruff. The undercoat is soft and lighter in color than the red/gold outer coat. The undercoat will shed twice a year, and if a Finnish Spitz is to be kept healthy, a good shedding of the undercoat when the dog is ready to "blow coat" is needed. Some exhibitors show dogs with undercoat that should be removed but that is the breeder, owner or handler's choice. Ommission to shed undercoat is considered neglect by some judges who prefer a clean and combed coat. Dew claws can appear on front and/or back feet. If back dew claws appear, they should be removed by the breeder. The front dewclaws can be removed but since they are usually small, they generally are not removed. If the back dew claws are present and not removed, they look like toes. The front dew claws appear to have no purpose.

The Finnish Spitz has a typical , which consists of a soft, dense and long, harsh that can measure one to two inches long. The coat should be stiffer, denser, and longer on the neck, back, back of thighs, and plume of the tail, whilst shorter on the head and legs. Dogs should sport a slightly longer and coarser coat than the bitches, who are slightly more refined. However the plume of the tail is important to the overall look of the dog but should not be too long. Feathered long tails hairs without sustanstance can give the dog an unkempt look. Additionally the tailset is important and the Finnish Spitz should be able to move its tail from one side to the other. Most Finnish Spitz have a preferred side and this is not incorrect.

Proper care of the coat is most important. The Finnish Spitz blows coat or loses its undercoat twice a year. It is imperative that owners brush out the old undercoat so the new coat can grow properly. Excessive undercoat can cause skin problems and although your dog may look fluffy and full, the undercoat may be causing serious skin problems.

In the show ring, the coat should be shown as completely natural; a brush through the coat is acceptable but no trimming is allowed, not even of whiskers. However, any excessive undercoat should be removed. Some exhibitors leave in the undercoat to make the dog's coat look bigger. However, most well trained judges see this problem. Another exception is the hair under the bottom of the feet. The hair under the feet as well as the toe nails should be nicely trimmed for show.

Puppies are often described as looking similar to a cub. They are born dark or fawn with a vast amount of black. A fawn puppy or one with a large amount of white of the chest is not preferable. The colour of the adult dog can be assessed by a experienced breeder at birth or cannot really be assessed by a novice until about four to six months, but even then the colour may change.The adult colour should be golden red. It can be of almost any shade, varying from pale honey to dark . There are no preferences over shades as long as the color is bright and clear with no hints of dullness, which is of most importance.The coat should never be of a solid colour. It should be shaded and without any defined colour changes. The coat is usually at its darkest shade on the back of the dog, gradually getting lighter around the chest and belly. The undercoat must always be lighter in colour than the topcoat, but is never allowed to be white.A small patch of white, no more than 1.5 centimetres wide, is allowable on the chest, and white tips on the feet are acceptable, but not desired.

The nose, lips, and rims of eyes should always be black.

The breed is prone to barking at anything they perceive as being out of the ordinary. They can be trained to reduce the amount of barking, although the barking does make them good s.

Because of their intelligence, Finnish Spitz are independent and strong-willed dog and are best trained with a soft voice and touch. They will easily become bored with repetitive training. Finnish Spitz can be trained to be very obedient with a light touch and lots of .

Finnish Spitz can excel in obedience, agility and rally as a companion dog.

The Finnish Spitz is typically a very healthy breed, and health concerns are rare. Here is a short list of what is known to occur, however you should consult your breeder and others who breed Finnish Spitz to understand the prevalence to this breed: