Club Atlético Los Andes is a sports club from the city of Lomas de Zamora, Greater Buenos Aires, Argentina. The football team currently plays in the Primera B Metropolitana, the regionalised third division of the Argentine Football Association.

The club was founded by a group of young people in 1917, and its name was chosen to commemorate the first balloon flight across the Andes mountain, which had happened in 1916.

Los Andes has had three runs in the Argentine Primera División: the first was in 1961, the second time was between the 1968 and 1971 Metropolitano championships. Los Andes best ever final positions were: 6th in Group A 1968 Metropolitano, and 8th overall in 1968 Torneo Nacional.

The third run in Primera División was in 2000/01 and lasted only one season: Los Andes finished 19th out of 20 teams and was relegated to B Nacional with the worst points average in the division.

In 2008 the club was promoted to Primera B Nacional after winning a promotion playoff against Nueva Chicago. 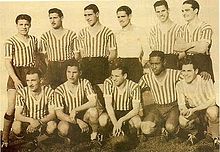 The 1938 team, which achieved the Primera C championship that year.

Los Andes team in 1957, which obtained the Primera C title.

The team that in 1960 got the last championship for the club.