Doctor Arthur Light is a fictional supervillain appearing in comic books published by DC Comics.[1] He is the third individual to have adopted the persona of Doctor Light, after a Golden Age foe of Doctor Mid-Nite and Arthur's associate Jacob Finlay. Light, a long-time enemy of the Teen Titans and the Justice League, has been portrayed both as a serious menace and as a company in-joke for incompetent supervillains. His stint as Doctor Light is concurrent with that of a superheroine using the same name, Kimiyo Hoshi. In 2009, Doctor Light was ranked as IGN's 84th Greatest Comic Book Villain of All Time.[2]

The first Silver Age Doctor Light was a criminal physicist named Dr. Arthur Light, who first appeared in Justice League of America #12, where he succeeded in capturing the League with light rays after first drawing them in by capturing Aquaman, then sending the League to different planets based on their weaknesses. He sent Superman to a red sun world, and Aquaman to a waterless one using faster light that opened wormholes. He then ordered Snapper Carr to write this down, before imprisoning him in a light field. He had not realised Superman and Batman had impersonated each other after Batman had been concerned about how easily the villain had overcome the other members, allowing Superman to escape the world he was sent to and rescue the other members. However, Light nearly succeeded in taking over the world after fooling the League with three duplicates of himself that were apparently committing robberies of light-associated objects, though they were actually placing devices around the world. Green Lantern realized this trick and faked his death to track Doctor Light, finally stopping him before he pulled the lever that would have set off the light impulses making him take over the world. A retcon introduced in Secret Origins #37 revealed that this character was actually the second Dr. Light. According to the retcon, his predecessor was his partner at S.T.A.R. Labs, a scientist named Jacob Finlay. Finlay created a technologically advanced suit to control light as a minor superhero, but was accidentally killed by Arthur Light near the beginning of his heroic career (though Finlay's death may have been caused by hiding his costume in a computer console, causing it to malfunction). Light took the suit and the "Doctor Light" codename, using them for selfish, criminal ends. He has been periodically haunted by Finlay's ghost through the years, but could use the light generated by the suit to drive off this spirit.[1]

Through the Silver and Bronze Ages, Doctor Light was a minor but persistent foe for a number of heroes. He first fought the Justice League and, after he failed to defeat that group, fought their former sidekicks, the Teen Titans. In JLA #136, he was one of King Kull's agents with which the Beast-Man hoped to wipe out humanity on all three Earths, helping in the attack on Earth-S by creating perputual light and darkness on each side of the Earth, and teaming up with the Shade. He was turned to stone by King Kull's satellites, but restored when they were destroyed. He was also notably beaten by a solo Hal Jordan not long after his defeat by the JLA. He then founded the supervillain team the Fearsome Five, but they were also defeated by the Titans, and Light was violently expelled from the Five by his teammates.[3] Each criminal caper led to Light's defeat (as villains always went down to defeat in the Silver and Bronze Ages), but these defeats were used later as the basis of his humiliation that culminated in the events of the "Identity Crisis" storyline and its aftereffects.

Perhaps Dr. Light's most ignominious defeat was by Little Boy Blue and his Blue Boys — a group of non-superpowered children.[4] 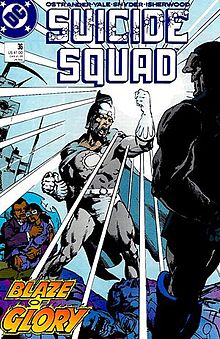 Driven by self-doubt and guilt, thanks in part to Finlay's ghostly presence, he volunteers for the Suicide Squad, a group of incarcerated supervillains who perform dangerous missions for the US government in exchange for clemency. On a mission against the patriotism-themed super-team called the "Force of July", he encounters Sparkler, the Force's youngest member. The presence of a superpowered child reminds him of past defeats and he lashes out, killing Sparkler with a blast through the chest.

During his time with the Squad, Light demonstrates a simple desire to be liked by the other members. He sees his chance when a mysterious pie-armed attacker is on the loose but nobody actually believes Light has been pied.

Finally, Finlay's ghost convinces Light to attempt a heroic turn during a mission where multiple members of the team, some unwillingly, have traveled to Apokolips. Light is swiftly shot dead by Parademons. Light was thus sent to Hell, where he was physically reunited with Finlay. Under the watch of a lesser demon and its annoying assistant, both men were released from Hell in turns and returned to life. Both would only soon die again: Arthur Light suffocates while still inside his grave, while the desiccated Finlay claws his way out of his own grave but was killed by a family of religious vigilantes. Arthur Light was again returned to life, and barely survives a great fall that his demonic tormentors may have intended to be fatal. Arthur also finds time to possess the body of the female Doctor Light, Kimiyo Hoshi. With the aide of her teacher, Kimiyo is able to reject Arthur's presence.

Dr. Light, freed of his ex-partner's hauntings, attempts to rejoin the Suicide Squad, but his appeal was summarily rejected by Amanda Waller.

He later becomes trapped in the Green Lantern's power battery, and as a consequence was temporarily transformed into living light. He later joined a short-lived incarnation of the Injustice Gang, in which he assisted Lex Luthor in building holographic duplicates of the JLA. 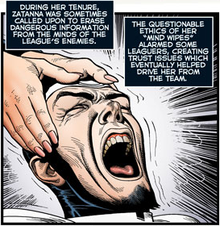 The controversial 2004 miniseries Identity Crisis retroactively revealed that Doctor Light had, at some point in the past, chased and raped Sue Dibny, the dead wife of the superhero Elongated Man, on the JLA Satellite.[1] Later issues revealed that he was a serial rapist with Light bragging that Dibny was not his first victim. After taking a vote (which was not unanimous; the voting members were Hawkman, Zatanna, and the Atom for the mindwipe, and Green Lantern, Green Arrow, and Black Canary against, with Flash casting the decisive vote after the recent death of his wife), the Justice League resolved to alter his mind through the use of Zatanna's magic so that Light would no longer pose a threat to their loved ones. In the process, they accidentally gave him a partial lobotomy, thus explaining how he fell from a plausible foe of the Justice League to a punching bag for the Teen Titans or Little Boy Blue. He later recovered his memories and intellect when witnessing a fight between the League members responsible for his mind-wipe — Kyle Rayner and Wally West replacing Hal Jordan and Barry Allen, respectively — and Deathstroke, and vowed revenge against the Justice League.[1]

When Dr. Light was next seen, he had captured Green Arrow, using him as bait so he could get revenge on the Teen Titans. The entire Teen Titans roster, former and current, responds to the call, but he successfully and brutally defeats them all. Ultimately, after a mass battle against the Titans wears him down, Cyborg is able to gain the upper-hand by using a device to drain the light out of the area, rendering Light powerless. Batman and Batgirl appeared to take him to prison, but revealed themselves to him to be Deathstroke and Ravager in disguise, and offered Light a place in the new Secret Society of Super Villains, a villainous organization headed by Lex Luthor. Dr. Light, hungry for vengeance and power, readily accepted.

As a Society member, he aided Merlyn and Deathstroke in defeating Green Arrow in Star City. Doctor Light then attacked and absorbed a great deal of power from the female hero Doctor Light, later referring to his treatment of her as raping her.[5] However, Kimiyo Hoshi eventually regained the powers he drained from her.

He later participated in the Battle of Metropolis in Infinite Crisis #7, where he was defeated by the combined efforts of the Ray, Black Canary, Martian Manhunter, and Kimiyo.

One Year Later and Final Crisis

After returning to Earth, in DC Universe #0, Doctor Light was a member of Libra's Secret Society of Super Villains. In Final Crisis #1, he and Mirror Master were sent by Libra to recover Metron's chair. They are briefly challenged by Empress, Sparx, and Más y Menos, but defeated them fairly easily by combining Light's beams with Mirror Master's mirrors. Light also aided in the murder of the Martian Manhunter, assisting the Human Flame and Libra.

The Milestone Comics group known as the Shadow Cabinet attempt to steal the remains of Light, still in the form of a candle.[7] This is revealed in the next issue to be a false premise; Superman and Icon set this scenario up to familiarize the Shadow Cabinet with the JLA. The candle is, however, used by Hardware to restore to Kimiyo Hoshi the remaining powers Arthur stole from her.[8][9]

During the Blackest Night event, Doctor Light is identified as one of the deceased entombed below the Hall of Justice.[10] Doctor Light's corpse was revived as a Black Lantern during the event.[11] He was later seen devouring the remains of Gehenna's corpse, and attacking Kimiyo Hoshi.[12] The two battle, with Arthur gaining the upper hand by employing psychology to make Kimiyo doubt herself. However, just as he is on the verge of victory, he makes the fatal mistake of threatening Kimiyo's children, enraging her to the point where she produces a light strong enough to completely incinerate Arthur and his ring.[13]

Dr. Light was a light manipulator, with the ability to control light for a variety of purposes. He could bend the light around him to become invisible, generate blasts of energy, create force fields, and fly. By mentally repulsing photons, Light could create areas of complete darkness. Teen Titans #23 implied that Light could "power up" by draining the ambient light in the area.

The limits of his powers are unclear, but he seemed to be able to wrest control of anything that emits light.[1] Such things have included Green Lantern constructs, Superboy's heat vision, and magic lightning from Wonder Girl's lasso. He was also able to take the "internal" light away from the light powered characters, the heroic Doctor Light and the Ray, leaving them temporarily powerless. He also had the ability to create holographic images. Despite his frequent defeats, he is quite powerful.

Originally, Doctor Light derived his powers from his suit, but over time he internalized this ability, and could use his powers without having to use his costume.

Arthur Light was mentally brilliant, a genius in the field of physics. However, his mindwipe by the Justice League reduced his intelligence substantially, and he lost his skill for creative use of his powers. Light's recent recovery of his memories seems to have brought his intellect back with them and also his paraphilia.[1] As a result, he became a much deadlier opponent, capable of fighting a huge team of Teen Titans to a narrow defeat and facing off against multiple superheroes at once.