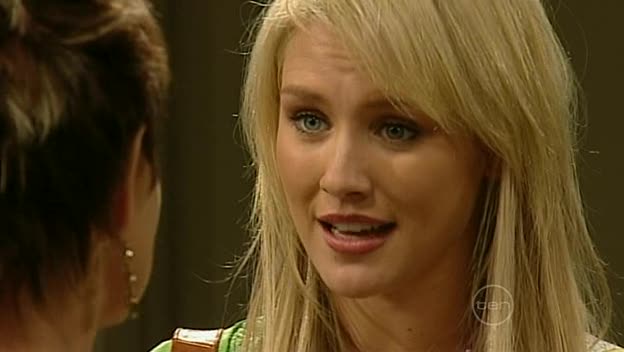 Heidi "Pepper" Steiger was a in the "", portrayed by . The character first appeared on , . Whelan left the soap on , after cutting her contract short.

Pepper is a P.E. teacher, and is the daughter of (). She lives at No. 30 with (), (), () and (). Her real name is Heidi, but when she was in primary school she sneezed for 6 weeks, hence the nickname 'Pepper'. Pepper arrived with her "fiancé", professional gambler Frazer Yeats. Their relationship was not as it appeared; she faked a relationship with Frazer to try and secure a spot at No. 30.

Pepper managed to capture the attention of her male students, including (), with her attractive looks. Because of this, Zeke believed she was in love with him after she approached him one night while he was standing outside his house. She told him that she loved him and that she wanted to be with him, but it was later revealed that Pepper was at the time when Zeke announced at her engagement party that she was in love with him and that the was a sham. It was revealed that Pepper had actually fallen for Frazer, who had eyes only for Rosie (who was actually at the time attracted to Will, Carmella's boyfriend). Eventually, Frazer and Pepper admitted they were not engaged after a hilarious episode when Will and Frazer went with Allan Steiger.

During her time on Ramsay Street, Pepper worked hard to get her mother and father, who were divorced, back together. She believed that they both still loved each other. At a dinner that she arranged, her father Allan proposed to her mother Chris (), but Chris declined and told Allan and Pepper that she had been in a relationship with a woman for a year. After her mother's revelation, Pepper revealed her homophobic beliefs, and let her mother's lifestyle become a death-sentence-like dilemma for her, but eventually came to accept it.

When () was being very disruptive in her class, Pepper asked to see her after class. Lolly wanted Pepper to see a giant bruise on her shoulder, and when Pepper saw it, Lolly ran for it. Pepper grabbed Lolly and demanded to know who hit her. Then () saw her holding Lolly by her shirt, Lolly cried that Miss Steiger was hurting her. After hearing both sides of the story, Susan had no choice but to suspend Pepper until the Board of Education knew the truth - that Lolly's stepmother, Sandy (Catherine Hill) was her abuser and that Lolly was too afraid to admit it. Thanks to the help of (), she later told everyone the truth. Pepper was allowed to take back her job, but she decided she wanted to take a break from teaching.

A short time later, Pepper had an affair with conniving business man Paul Robinson (), and came clean to Rosie, who was also interested in him. Rosie accepted her apology, but accused Paul of mistreating Pepper. Pepper and Rosie then shared a passionate kiss one day when Pepper was having a breakdown. Unbeknownst to them, Ringo was watching and before long all of Erinsborough knew, and assumed that Pepper and Rosie were a couple. Meanwhile, Pepper and Rosie agreed to leave their friendship as it is and forget the kiss, unaware that the whole town suspected that they were . They eventually moved past that stage.

Recently, Pepper has been stalked, and was being sent presents and received anonymous phone calls, with the only sound being children playing in a . Pepper almost immediately suspected that the perpetrator was Kevin Casey (Zen Ledden), who had impregnated Pepper at age seventeen. Pepper had later miscarried.

Pepper decided she needed to track Kevin down, and went to see his mother, Mary (). A seemingly-innocent Mary claimed not to have any idea what Kevin was up to. However, it soon became clear that Kevin was not Pepper's stalker; it was Mary. The deranged woman had even set up a nursery for the deceased child in her house. On a later visit, Mary spiked a piece of cake and gave it to Pepper. After her visit, she went to 's () annulment party, where she fainted. Rosie called an ambulance, and it was assumed that someone had spiked her drink; however, Pepper was convinced that it was something she had eaten earlier that was spiked. Pepper visited Mary a third time, still oblivious to the fact that Mary was her stalker, only to be knocked unconscious by Mary and tied up in the nursery.

Mary kept Pepper locked up for a long time, determined that Pepper would pay for taking her grandchild away, believing Pepper had had an abortion. Mary used Pepper's phone to text Rosie saying that Pepper was going away for a bit to clear her head, to cover up her absence. Mary locked her son Kevin in with Pepper too, determined that they would get back together, so that they could 'be a family again'. Pepper and Kevin played along, pretending to get back together so that Mary would let her guard down, and let them out. However, she still wouldn't let them go, so, becoming desperate, they lit a fire in the room, so that Mary would have to open the door. Mary was devastated that the nursery was being destroyed, and opened the door, wanting to save everything. Kevin ran out, where he fainted, and the door shut behind him, locking again, with the key still in Mary's hands. Pepper tried to get Mary to open the door so they could get out, but Mary was too distraught. Eventually, however, they did get out, and the police arrested Mary.

On her return to Ramsay Street, Pepper told no one what had happened to her, although Frazer became suspicious that something was up when she was continually jumpy and terrified of being alone. Eventually, she had to tell them about it when she discovered that Sky was sharing a cell with Mary. Sky had been allowed to have daughter Kerry with her in jail, but knowing Mary's obsession with babies, Pepper felt sure Mary would try something, and told Harold.

Since then, Pepper has met Adam Rhodes (), an English builder who was renovating the Scarlet Bar (now Charlie's). At first, she stated her dislike of him, but a mutual attraction was between the pair. Adam caught her attention, and they went out on a date.. She really enjoyed herself, and they started to date properly. But her dad, Alan, thought Adam seemed suspicious and was worried about Pepper. When Pepper discovered there were things Adam wouldn't tell her, she jumped to the conclusion that Adam was a criminal. She told him that he had told her off for lying and concealing thing and such things, but he was doing the same, and she deserved better. Adam couldn't bring himself to tell her the truth, and she left. He decided to leave Erinsborough, and wrote Pepper a note telling her. She stormed around to his house, before he had had time to leave, and eventually he told her that he used to be a policeman, but his partner had died had he blamed himself. He left Erinsborough still, despite Pepper begging him to stay, telling him that she would help him through it.

Soon afterwards, her father told her that he was moving to Cairns with his fiance and her children Anne Baxter, and . Pepper decided to stay behind. At the farewell party for the family, Steiger married Janelle in a surprise ceremony, and Pepper was happy for him, unlike when he first started dating Janelle.

Pepper had a better surprise at the party though, when Adam turned up, telling her that if she wanted he would stay, and they could work through it together.

Pepper was involved in the bus crash that took place on the way home from Frazer and Rosie's wedding, although managed to escape from the blaze that followed with minor injuries.

In August, Pepper was diagnosed with type 2 . The abnormal cells were removed but she was told regular checks would be made to make sure it didn't become more serious.

Pepper left Ramsay Street on , to go to a new job near her father. Adam decided to accompany her at the last minute, allowing Pepper to be heartbroken, thinking she would lose Adam.