Lightning Lord is a fictional supervillain published by DC Comics. The older brother of Lightning Lad and Lightning Lass of the Legion of Super-Heroes, he first appeared in Superman #147 (August 1961), and was created by Jerry Siegel and Curt Swan. 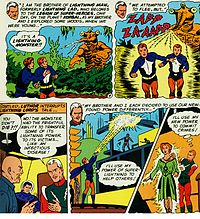 Lightning Lord (real name Mekt Ranzz) is a founding member of the Legion of Super-Villains.

A single birth on a planet where twin births are the norm, Lightning Lord developed an anti-social personality in response to his circumstance of not having a twin sibling. When the spacecraft which he was travelling in along with his younger brother and sister (Legion of Super-Heroes members Lightning Lad and Lightning Lass) ran into electrical difficulties, the Ranzz siblings were forced to land their craft on the planetoid Korbal. In an attempt to lure the local lightning beasts to recharge their battery, they were charged with electrical energy themselves, giving them the power to generate lighting. Given his newfound ability, Lightning Lord decided to turn to a life of crime.

He has an adversarial but protective relationship with his siblings, and during any given encounter will usually attempt to get one of them (usually his sister) to join him in his life of crime. However, in a story set in the future, Mekt return to Winath and reforms.[1] This story also introduces Mekt's male lover (which is confirmed by the author of the story, Tom Bierbaum).[2] This interpretation of the character does not carry into the later versions of Legion continuity.

Following the Zero Hour "Legion reboot", Lightning Lord was relatively unchanged, although he now hated his siblings and there was no Legion of Super-Villains. He was also directly responsible for Garth losing his arm and was defeated when his siblings combined their powers into one massive burst, seemingly shorting him out and removing his powers.

In the Legion Worlds miniseries it was revealed that he was rehabilitated and working on his parents' farm.[3]

In Superman/Batman "Absolute Power", Lightning Lord, Cosmic King and Saturn Queen all appear married as the substitute parents of Clark Kent and Bruce Wayne in an alternate timeline which they constructed. Here the Worlds Finest are their enforcers and have taken over the world, while other JLA members were killed. Lightning Lord kills Barry Allen and electrocutes the Kents as they find the pod. Wonder Woman kills Bruce, after which Clark strangles her with her lasso, but the timelines start to unravel. When it is changed so the Kents were not killed when finding the rocket, but the Future Bruce breaks down and kills Chill, the villains join with Ra's al Ghul to take over the world. However reality is finally restored, and the villains are taken back to the Future, where they are imprisoned.

Following the most recent Legion reboot, Mekt shows up as a leader of a group of "black ops" superheroes called the Wanderers. He recruits his sister, Karate Kid, Ultra Boy, Star Boy, and Mon-El to fight an incoming invasion of Dominators. His anti-social personality was replaced and instead he is suicidal. He has lightning powers, but does not use the alter ego of Lightning Lord.

It was recently revealed that Mekt was part of a cult on Winath which worships the nature spirit Validus, also known as the Lord of Lightning, as local superstition has it that singletons are the children of Validus. This cult sent him to Korbel to gain the power of the lightning beasts as part of a prophecy. However, when his siblings also gained powers, the cult rejected him, as the prophecy did not mention this.

In Final Crisis, he was among the supervillains in Superboy-Prime's Legion of Super-Villains.

In the 2009 revival of Adventure Comics, Mekt's backstory was given a significant twist. In the second issue, an imprisoned Mekt sends his brother Garth on a mission to uncover the truth about whether Mekt was in fact a single birth, or whether his suspicions are correct that he does have a twin and that his parents have covered this up.[4] It remains to be seen whether he is telling the truth, is lying, or has deluded himself into believing this.

Lightning Lord is able to generate electricity and hurl it as destructive lightning bolts.