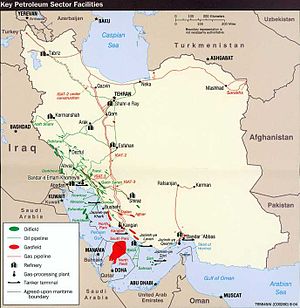 Iran's gas reserves are 15% of the world's total. Iran is a founding member of the Gas Exporting Countries Forum.

The National Iranian Gas Company (NIGC) was established in 1965 as one of the four principal companies affiliated to the Ministry of Petroleum of the Islamic Republic of Iran with 25,000 million Rials initial capital.

NIGC is responsible for the treatment, transmission, and delivery of natural gas to the domestic, industrial, and commercial sectors and power plants. Close to 6,230 villages and 713 cities and towns have access to natural gas.[1] NIGC does not play a role in awarding upstream gas projects; that task remains in the hands of the National Iranian Oil Company.[2] Iran has the largest gas network in the world with 30,000 kilometres (19,000 mi) of high-pressure pipelines.[3]

The NIGC subsidiaries are:

Iran has approximately 29.6 trillion cubic meters of proven gas reserves which accounts for 16% of the world’s total reserves. This places Iran behind Russia with the second largest gas reserves worldwide. In 2009, Iran’s natural gas production stood at 116 billion cubic metres. In 2010, this number rose to 138.5 billion cubic metres which shows a 19% increase. Most of Iran’s gas is consumed domestically and has been increasing at an average annual rate of 12% for the past 15 years.

In 2011, Iran signed a contract worth $10 billion with Baghdad and Damascus in order to export Iran’s gas to Iraq, Syria, Lebanon, the Mediterranean region and eventually Europe. It is estimated that in the next three to four years there will be an excess production of 200-250 million cubic metres of gas in the South Pars gas field, the largest worldwide gas field located in Persian Gulf.