U.S. Route 301 in Maryland is a major highway that runs from Delaware to the Governor Harry W. Nice Memorial Bridge into Virginia. It passes through three of Maryland's four main regions: the Eastern Shore, the Baltimore-Washington Metropolitan Area, and Southern Maryland. US 301 serves mainly as a bypass of Baltimore and Washington from Delaware to Virginia. 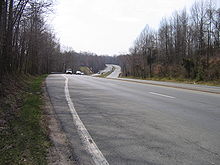 US 301 is a minimum of four lanes throughout the state of Maryland. It enters the state via the Governor Harry W. Nice Memorial Bridge and joins the original route of Maryland Route 3 near the town of Newburg in Charles County. Between the Potomac River and the city of Bowie, the route is known as the Robert Crain Highway. Running north, the highway serves the towns of La Plata, Waldorf (where it briefly overlaps MD 5), Brandywine, Upper Marlboro (where it interchanges with MD 4), and Bowie before joining US 50 in Bowie and meeting the southern terminus of MD 3, which continues along the Crain Highway to I-97 and MD 32.

Now following US 50 (and secret I-595) east along the John Hanson Highway, the route serves Annapolis and crosses the Severn River via the Pearl Harbor Memorial Bridge before traversing Sandy Point State Park to the foot of the Chesapeake Bay Bridge. The route meets the southern terminus of Interstate 97, which connects to the highway near the western terminus of MD 665, a freeway spur into downtown Annapolis. US 301 connects to other local highways such as MD 450, MD 2 (which joins the route at this interchange), and MD 70. At MD 70, secret I-595 ends, and US 50, US 301 and MD 2 continue across the Severn River. Both highways form an effective freeway bypass of Annapolis, but both highways also experience enormous backups in the eastbound direction during the summer months due to heavy tourist traffic attempting to cross the Chesapeake Bay. Along the Annapolis section, the freeway takes on a blue star memorial highway designation.

After crossing the Severn River, the blue star memorial highway designation becomes the road's name, Blue Star Memorial Highway. Upon crossing the Chesapeake Bay, US 301 enters Queen Anne's County at Kent Island. Continuing east, the highway leaves the island and enters the Delmarva Peninsula as it crosses the Kent Narrows via a high-level bridge (with MD 18 making use of the original drawbridge). US 301 and US 50 separate near Queenstown. At the split, US 50 continues as the Ocean Gateway to Ocean City. The segment between the Chesapeake Bay Bridge and the 50-301 split is noted for the many right-in/right-out interchanges with MD 18 and MD 835, a legacy of the days when the route was a four-lane at-grade expressway.

Downgrading from a six-lane freeway to a four-lane at-grade expressway, the route runs north, serving as one of the backbones of the Delmarva Peninsula. Still known as the Blue Star Memorial Highway, the route connects with several major highways in the northern segment of the Eastern Shore, including MD 213 and MD 313. It narrows abruptly to a two-lane country road as it enters the state of Delaware.

In 1940, the completion of the Harry W. Nice Memorial Bridge heralded the entry of US 301 into Maryland. A short connector between the northern end of the bridge and MD 3 resulted in the majority of the latter route being taken over by US 301, with only a small portion remaining signed as MD 3 (this portion is now MD 257).

Originally, the route went all the way along former MD 3 into Baltimore and ended near present-day Maryland Route 295 Russell Street. As US 301, it was upgraded into a four- and six-lane divided highway throughout in the 1940s and 1950s. In the 1960s, the route was rerouted along US 50 to the Eastern Shore where it was routed up former Maryland Route 71 into Delaware. Today, Route 301 is a multi-lane highway throughout its path through the state with the exception of the Governor Harry W. Nice Memorial Bridge; the nine miles (14 km) of MD 3 between US 50 and Interstate 97 is also a four- and six-lane divided highway and is part of the same continuous physical route.

The segment of the highway between the eastern end of the Chesapeake Bay Bridge and the US 50/US 301 split in Queenstown was originally built as a four-lane at-grade divided expressway. By the late 1980s, traffic levels were so high that the route was upgraded into a six-lane grade-separated limited-access expressway, with most of the intersections converted into right-in/right-out interchanges, and a few others being converted into more standard interchanges. The upgrade of the route was completed by the early 1990s.

The numbering of US 301 coincidentally fits into the Maryland State Highway System as it passes through the area on the Eastern Shore where a route numbered MD 301 would be found, in Kent County and northern Queen Anne's County. It also crosses Maryland Route 300, Maryland Route 302 and even the former Maryland Route 301.