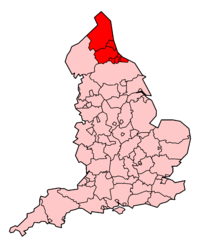 The North East Ambulance Service NHS Trust (NEAS) is the authority responsible for providing NHS ambulance services in North East England, covering the counties of County Durham, Northumberland and Tyne and Wear and the boroughs of Darlington, Hartlepool, Middlesbrough, Redcar and Cleveland and Stockton-on-Tees. The trust was formed on July 1, 2006, following the merger of the old Northumbria Ambulance Service, County Durham Ambulance Service and the Tees division of the Tees, East and North Yorkshire Ambulance Trust (TENYAS).

It is one of 12 Ambulance Trusts providing England with Emergency medical services, and is part of the National Health Service, receiving direct government funding for its role. There is no charge to patients for use of the service, and under the Patient's charter, every person in the United Kingdom, has the right to the attendance of an ambulance in an emergency. The North East Ambulance Service also provides Patient Transport Services (PTS) or non-emergency services to patients in the area.

NEAS is one of four trusts in the country to receive a "good" rating in the 2006/7 Healthcare Commission Healthcheck [1] report. This is the highest rating achieved by any ambulance service for provision of care.

On 23 August 2010, the North East Ambulance Service announced[citation needed] it was trialling a new service known as NHS 111. The trials would mean that anyone living in the County Durham and Darlington area could dial 111 to access out of hours urgent care. The idea is for this service to be rolled out nationally and to replace NHS Direct.

Headquarters
The main trust HQ is currently based in Newburn Riverside, Newcastle upon Tyne. The HQ is known as Bernicia House.

Training Centres
The two main training centres for NEAS are based at Lanchester Road Hospital in Durham and Scotswood House in Newcastle Business Park.

New 'Bank Rapids' are now in operation. The 'Bank Rapids' are qualified paramedics from across the United Kingdom who have offered to assist NEAS. NEAS provide the rapid response cars. The majority of these paramedics are on the bank and only do occasional shifts as and when they like. The 'Bank Rapids' start and end there shift at the Headquarters at Newburn Riverside however could be sent anywhere throughout the North East to provide cover.

The New 'Backworth' Ambulance Station is now operational in the North Tyne division.

A new secondary control centre and ambulance station in Monkton, Hebburn is now operational. This is known as Russell House and has replaced Hebburn ambulance station and the Middlesbrough Control Centre. Monkton is also the base for the Hazardous Area Response Team which became operational in early 2010. The HART team respond to all major and serious cases throughout the North East Ambulance Service area. They have specialist equipment and paramedics to deal with big scale emergencies.[citation needed]