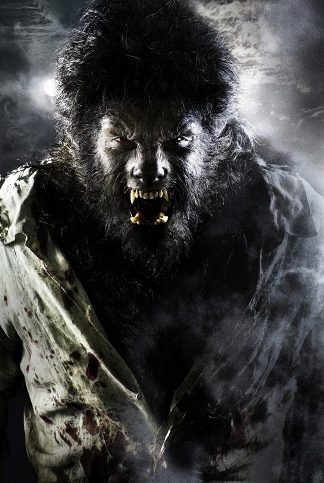 Set in the late s, the film keeps the plotline of the original, with Lawrence Talbot meeting his father following the death of his brother. The film details events during Lawrence's past that led to his estrangement from his father (which includes Gwen), and the setting is expanded from (now identified as the village from the original) to .

, Rob Dixon, , , David Schofield, David Sterne, Roger Frost, and have also been confirmed, although their roles are not known.

In March 2006, announced the remake of "The Wolf Man" with actor (a fan of the original film and collector of "Wolf Man" memorabilia) in the lead role.

In January 2008, Romanek left the project because of "creative differences".

Shooting took place from to in the .

Rick Baker created the make-up for "The Wolf Man". When he heard Universal was remaking the film, he eagerly pursued it, as both "The Wolf Man" and "Frankenstein" inspired him to become a make-up artist as a child. He acknowledged transforming del Toro was difficult because he is a hairy man: "Going from Benicio to Benicio as the Wolf Man isn't a really extreme difference. Like when I did "", we went from this naked man to a four-legged hound from hell, and we had a lot of room to go from the transformation and do a lot of really extreme things. Here we have Benicio del Toro, who's practically the Wolf Man already, to Benicio del Toro with more hair and bigger teeth." The make-up took three hours to apply, and one hour to remove. New pieces of and loose hair was applied to del Toro's face each day, while several and wigs were created in case some were damaged. [cite news | author = Lindsay Soll | title = First Look: Benicio Del Toro as the Wolfman | work = | date = 2008-03-19 | url = http://www.ew.com/ew/article/0,,20185191,00.html | accessdate=2008-03-19] Baker and del Toro were adamant about the design resembling the make-up created by Jack Pierce, but Romanek went through thousands of concept art. When Johnston signed on, Baker returned to his second design, which is the finished result. [cite news|author=Ryan Rotten|title=SDCC '08: The Wolfman At Your Door|work=Shock Till You Drop|date=2008-07-29|url=http://www.shocktillyoudrop.com/news/comicconnews.php?id=7133|accessdate=2008-07-30] Baker said the transformation will likely be computer-generated, which disappoints him as he is not being involved and therefore feels it will look unrealistic (as the animators do not have his knowledge of the design). [cite news|url=http://moviesblog.mtv.com/2008/07/27/cgi-wolf-man-an-upset-rick-baker-shows-his-teeth/|author=Larry Carroll|title=CGI Wolf Man? An Upset Rick Baker Shows His Teeth|work= Movies Blog|date=2008-07-27|accessdate=2008-07-27]