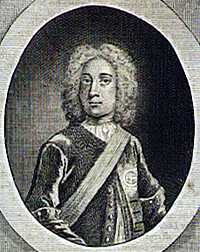 Lord Burlington, also known as "the architect Earl", was instrumental in the revival of . He succeeded to the title and extensive estates in and at the age of ten. He showed an early love of music. dedicated three operas to him, while staying at Burlington House: "", "" and "". Three foreign s 1714 &ndash; 1719 and a further trip to Paris in 1726 gave him opportunities to develop his taste. His professional skill as an architect (always supported by a mason-contractor) was extraordinary in an English aristocrat. He carried his copy of 's book "" with him in touring the in 1719, and made copious notes in the margins. Burlington never closely inspected Roman ruins or made detailed drawings on the sites; he relied on Palladio and Scamozzi as his interpreters of the classic tradition. Another source of his inspiration were drawings he collected, some drawings of Palladio himself, which had belonged to ("illustration, left") and many more of Inigo Jones' pupil John Webb, which Kent published in 1727 as "Some Designs of Mr Inigo Jones... with Some Additional Designs" that were by Kent and Burlington. The important role of Jones' pupil Webb in transmitting the palladian&mdash;neo-palladian heritage was not understood until the 20th century. Burlington's Palladio drawings include many reconstructions after Vitruvius of Roman buildings, which Burlington planned to publish. In the meantime, in 1723 he adapted the palazzo facade in the illustration for the London house of in Old Burlington Street, which was engraved for "" iii (1725). The process put a previously unknown Palladio design into circulation.

Burlington's first project, appropriately, was his own London residence, , where he dismissed his architect when he returned from the continent in 1719 and employed the Scottish architect , with the history-painter-turned-designer for the interiors. The courtyard front of Burlington House, prominently sited in , was the first major executed statement of neo-Palladianism.

By the early 1730s Palladian style had triumphed as the generally-accepted manner for a British country house or public building. For the rest of his life Burlington was "the Apollo of the arts" as phrased it&mdash; and Kent his 'proper priest."

In 1739, Burlington was involved in the founding of a new charitable organisation called the . Burlington was a governor of the charity, but did not formally take part in planning the construction of this large children's home completed in 1742. Architect for the building was a , who took on the commission as an act of charity.

Many of Burlington's projects have suffered, from rebuilding or additions, from fire, from losses due to urban sprawl. In many cases his ideas were informal: at the architect recalled that "the general ideas were first struck out by the Earls of Burlington and Leicester, assisted by Mr. ." Brettingham's engraved publication of Holkham credited Burlington specifically with ceilings for the portico and the north dressing-room.

Burlington's architectural drawings, inherited by his son-in-law the are preserved at , and enable attributions that would not otherwise be possible.

's Burlington House as it was in 1855, before a third storey was added]
* (, Piccadilly, London): Burlington's own contribution is likely to have been restricted to the former colonnade (demolished 1868) In London, Burlington offered designs for features at several aristocratic free-standing dwellings, none of which have survived: Queensbury House in Burlington Gardens (a gateway); Warwick House, Warwick Street (interiors); Richmond House, Whitehall (the main building);

* , Wiltshire, for Charles, Lord Bruce: from 1721, executed by Burlington's protegé (enlarged and remodelled since). In the original house, the high corner pavilion blocks of ' Wilton were provided with the "" motif to be seen at Burlington House. Burlington, with a good eye for garden effects, also designed ornamental buildings in the park (demolished)

* , the Dormitory: 1722 &ndash; 1730 (altered, bombed and restored), the first public work by Burlington, for which Sir had provided a design, which was rejected in favor of Burlington's, a triumph for the Palladians and a sign of changing English taste.

* Waldershare Park, Kent, the Belvedere Tower: 1725 &ndash; 27. A design for a garden eye-catcher that might have been attributed to Colen Campbell, were it not for a ground plan among Burlington's drawings at Chatsworth.

* Chiswick House Villa, Middlesex: The "Casina" in the gardens, 1717, was Burlington's first essay. The house he designed for himself was demolished. The is one of the gems of European 18th-century architecture.

* The : 1731 &ndash; 32 (facade remodelled). In the -like space, Burlington attempted an archaeological reconstruction "with doctrinaire exactitude" (Colvin 1995) of the "Egyptian Hall" described by , as it had been interpreted in Palladio's "Quattro Libri." The result is one of the grandest Palladian public spaces.

Richard married Dorothy Saville on , . Dorothy was natural daughter of and Mary Finch.