The Chevrolet Detroit Belle Isle Grand Prix presented by shopautoweek.com is a weekend of professional auto racing held at the Renaissance Center and later the Belle Isle in Detroit, United States. It has been held from 1989-01, 2007–08, and is scheduled for 2012 and beyond. It has headlined the CART open-wheel series in the first era and the IndyCar Series in the latter, supported by feeders such as the Indy Lights and Formula Atlantic and top-level sports car series such as the Trans-Am and the ALMS. It has been held in June, after the Milwakuee race and before the Portland race.

Open wheel racing in Detroit dates back to the 1920s-1950s, when AAA held the Detroit 100 at the Michigan State Fairgrounds. AAA also held one five-mile (8 km), non-championship race at Grosse Pointe in 1905.

The current race has its origins dating back to 1982 when it was a Formula One World Championship event held on the Detroit street circuit encompassing the Renaissance Center. The original circuit was 2.493 miles (4.012 km) with seventeen corners, and proved to be even slower than Monaco. The rough, demanding, course even included a railroad track crossing and mimicked Monaco, with a tunnel on the main straight. While officially the Detroit Grand Prix, it also has been referred to under the monikor of United States Grand Prix East, because there were multiple Grands Prix in the U.S. at the time. For 1989, the race was planned to be moved to Belle Isle,[1] a city park in the Detroit River, but an agreement could not be established. Instead, in 1989 Formula One left Detroit permanently, and the U.S. Grand Prix moved to Phoenix.

For 1989, the race in Detroit was replaced by a CART event. Instead of moving the race, CART utilized a slightly modified version of the street circuit, eliminating the chicane on the main straight. The race was held on this 2.52-mile (4.06 km) layout for three years. Beginning in 1992, the race was moved to the previously planned temporary course on Belle Isle. The first layout measured 2.1 miles (3.4 km). After a subtle reconfiguration, and due to CART remeasuring all circuits in 1997, the track then measured 2.346 miles (3.776 km).

The event, along with the Michigan 500, provided two CART races in southern Michigan annually.

The 2000 event saw young Brazilian Hélio Castroneves score his first Champ Car victory for Marlboro Team Penske. After his victory lap, he stopped on the frontstretch and climbed the catch fencing in an apparent effort to share his joy with the spectators. Helio became known as "Spider-Man" because of this celebration, which has been repeated in his later victories.

From 1984-2001, the SCCA Trans-Am Series held a race in support of the Detroit Grand Prix. The Motor City 100 was often regarded[who?] as the most important event of the Trans Am schedule.

Even though the track was a temporary street course, it became known as The Raceway on Belle Isle. It was widely criticized for its narrowness, poor access, and its overall uncompetitive nature. Participants also disliked the facility because of its lack of paved areas for support activities. Paddock areas were often muddy and unable to accommodate the teams.

After 2001, CART chose to drop the race from the schedule.

In 2006, Roger Penske spearheaded talks to revive the race for 2007 as part of the ALMS and IndyCar Series schedules. Penske had recently experienced tremendous success as head of the Super Bowl XL Detroit Metro Host Committee. On September 29, 2006, it was announced that the Detroit Indy Grand Prix would return as the tenth race of the ALMS's 12-race season and penultimate race of the IndyCar Series' seventeen-race schedule.

To improve access to the track, a park-and-ride system, similar to what was used at Super Bowl XL, was implemented. Further paddock and track work was completed before the race. The 2007 event attracted a strong crowd, and was considered a success. It was held again in 2008.

On December 18, 2008, the scheduled race for 2009 was canceled. The ongoing automotive economic crisis, and its impact on the Detroit-area was the primary reason. Roger Penske did not rule out a return in the future.[2][3]

On September 20, 2011, race organizers gained approval from Detroit City Council to use the updated track and support area on Belle Isle.[4] On October 11, 2011, it was announced that the race will return starting in 2012.[5]

The Renaissance Center course utilized from 1982–1991 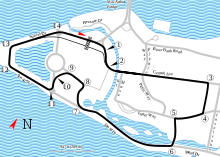 ^A Winner Wally Dallenbach, Jr. was disqualified due to car being underweight