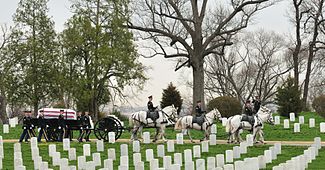 A military funeral is a specially orchestrated funeral given by a country's military for a soldier, sailor, marine or airman who died in battle, a veteran, or other prominent military figures or heads of state. A military funeral may feature guards of honor, the firing of volley shots as a salute, drumming and other military elements, with a flag draping over the coffin. On occasion, deceased soldiers have been accorded military funerals by their enemies (for example, see Manfred von Richthofen).

As of January 1, 2000, Section 578 of Public Law 106-65 of the National Defense Authorization Act mandates that the United States Armed Forces shall provide the rendering of honors in a military funeral for any eligible veteran if requested by his or her family. As mandated by federal law, an honor guard detail for the burial of an eligible veteran shall consist of no less than two members of the Armed Forces. One member of the detail shall be a representative of the parent armed service of the deceased veteran. The honor guard detail will, at a minimum, perform a ceremony that includes the folding and presenting of the flag of the United States to the next of kin and the playing of Taps which will be played by a lone bugler, if available, or by audio recording. Today, there are so few buglers available that the United States Armed Forces often cannot provide one.[1] However, federal law allows Reserve and National Guard units to assist with funeral honors duty when necessary. 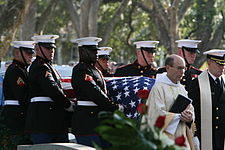 A military chaplain seen leading honor guards derived from the United States Marine Corps as they carry the casket of General Robert H. Barrow to the place of burial.

Generally, federal law allows for military funeral honors for all veterans who were discharged under circumstances "other than dishonorable." Funeral directors will require the veteran's DD Form 214 to establish eligibility.[2]

Those who are eligible for military funerals and full honors in the United States include the following:[3]

In the United States, there are several types of military funerals such as those performed at Arlington National Cemetery, which include and omit certain components depending on the status of the deceased (active, retired, veteran, rank/occupation).[4]

Full honor military funerals include all standard honors in addition to the following:

Armed forces military funerals include all standard and full honors in addition to the following:

When a spouse or other dependent of a current or former member of the United States Armed Forces is buried, the military service in which the primary party served will provide a casket team and a chaplain. No other military honors will be rendered unless the spouse served in the military.

Sequence for folding the flag of the United States

The flag of the United States draped over the casket is meticulously folded twelve times by a total of six honor guards, three on each side of the casket. The following information describes the symbolic meaning for each fold of the flag.[5] It is important to note that the twelfthfold procedure was a common practice long before the creation of a ceremonial assignation of "meaning" to each of the steps. Such symbolism has been mistakenly attributed to have an integral part in the origins of the twelfthfold procedure. In truth, it evolved as a means of providing religious significance to the ceremony and its participants, and is often requested to be read alongside the folding of the flag at funerals.[6]

Often, three spent shell-casings, each representing one of three volleys, are slipped into the folds of the flag before its presentation to the next of kin.[10][11] When the flag is completely folded, the stars point upwards, which remind Americans of their national motto, In God We Trust.[8][9][12] After the flag is completely folded and tucked in, it takes on the appearance of a bicorne hat, reminding Americans of the soldiers who served under General George Washington, and the sailors and Marines who served under Captain John Paul Jones, who were followed by their comrades and shipmates in the United States Armed Forces.[8][9][12] 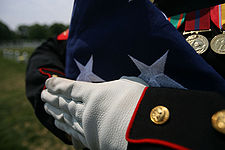 The flag of the United States is presented to the next of kin. 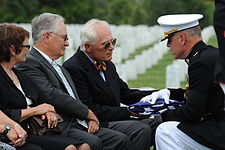 An honor guard representing the United States Army would present the flag to the next of kin by saying:[13]

An honor guard representing the United States Marine Corps would present the flag to the next of kin by saying:[13]

An honor guard representing the United States Navy would present the flag to the next of kin by saying:[13]

An honor guard representing the United States Air Force would present the flag to the next of kin by saying:[13]

An honor guard representing the United States Coast Guard would present the flag to the next of kin by saying:[13] 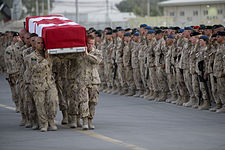 The coffin of Lieutenant Reginald Warneford being carried to his burial plot in Brompton Cemetery by members of the Royal Naval Division, June 21, 1915. 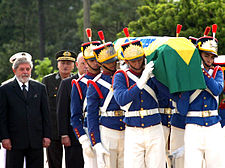 President Lula During the funeral of MINUSTAH`s Commander.

The term "ramp ceremony" has, since about 2005 and during the wars in Iraq and Afghanistan, come to have a particular meaning - that of a solemn memorial ceremony for a coalition soldier killed in a war zone. The ceremony usually takes place at an airfield near or in a war zone, where an airplane is usually waiting nearby to take the soldier's remains to his or her home country.[20] A ramp ceremony is not an actual funeral; the funeral is usually conducted in the deceased's home country.