Id, ego, and super-ego are the three parts of the "" defined in 's structural model of the psyche; they are the three theoretical constructs in terms of whose activity and interaction mental life is described. According to this model, the uncoordinated instinctual trends are the "id"; the organised realistic part of the psyche is the "ego," and the critical and moralizing function the "super-ego."

Even though the model is "structural" and makes reference to an "apparatus", the id, ego and super-ego are "functions of the mind" rather than parts of the brain and do not necessarily correspond one-to-one with actual somatic structures of the kind dealt with by neuroscience.

The concepts themselves arose at a late stage in the development of Freud's thought: the structural model was first discussed in his 1920 essay "" and was formalized and elaborated upon three years later in his "." Freud's proposal was influenced by the ambiguity of the term "" and its many conflicting uses.

The terms "id," "ego," and "super-ego" are not Freud's own but are latinisations originating from his translator . Freud himself wrote of "das Es," "das Ich," and "das Über-Ich"—respectively, "the It," "the I," and the "Over-I" (or "Upper-I"); thus to the German reader, Freud's original terms are more or less self-explanatory. The term "das Es" was borrowed from , a German physician to whose unconventional ideas Freud was much attracted. [Groddeck, G.W. (1928), "The Book of the It" "Nervous and Mental Diseases Publishing Company, New York"] (Groddeck's translators render the term in English as 'the It').

The Id comprises the unorganized part of the personality structure that contains the basic drives. The Id is unconscious by definition. In Freud's formulation,

cquote|It is the dark, inaccessible part of our personality, what little we know of it we have learnt from our study of the and of the construction of neurotic symptoms, and most of this is of a negative character and can be described only as a contrast to the ego. We all approach the id with analogies: we call it a chaos, a cauldron full of seething excitations ... It is filled with energy reaching it from the instincts, but it has no organization, produces no collective will, but only a striving to bring about the satisfaction of the instinctual needs subject to the observance of the pleasure principle. [Freud, "New Introductory Lectures on Psychoanalysis" (1933)]

The id stands in direct opposition to the super-ego. Developmentally, the Id is anterior to the ego; i.e. the psychic apparatus begins, at birth, as an undifferentiated id, part of which then develops into a structured ego. Thus, the id:

"contains everything that is inherited, that is present at birth, is laid down in the constitution -- above all, therefore, the instincts, which originate from the somatic organisation and which find a first psychical expression here (in the id) in forms unknown to us" [Freud, "An Outline of Psycho-analysis" (1940)] ] .

The mind of a newborn child is regarded as completely "id-ridden", in the sense that it is a mass of instinctive drives and impulses, and demands immediate satisfaction. This view equates a newborn child with an id-ridden individual&mdash;often humorously&mdash;with this analogy: an tract with no sense of responsibility at either end.

The id is responsible for our basic drives such as food, , and aggressive impulses. It is amoral and egocentric, ruled by the pleasure–pain principle; it is without a sense of time, completely illogical, primarily sexual, infantile in its emotional development, and will not take "no" for an answer. It is regarded as the reservoir of the or "sexual energy".

Freud divided the id's drives and instincts into two categories: life and death instincts - the latter not so usually regarded because Freud thought of it later in his lifetime. Life instincts (Eros) are those that are crucial to pleasurable survival, such as eating and copulation. Death instincts, (Thantos) as stated by Freud, are our unconscious wish to die, as death puts an end to the everyday struggles for happiness and survival. Freud noticed the death instinct in our desire for peace and attempts to escape reality through fiction, media, and substances such as alcohol and drugs. It also indirectly represents itself through aggression. 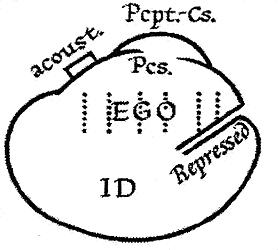 thumb|left|200px|"The ego is not sharply separated from the id; its lower portion merges into it.... But the repressed merges into the id as well, and is merely a part of it. The repressed is only cut off sharply from the ego by the resistances of repression; it can communicate with the ego through the id." (Sigmund Freud, 1923)

The Ego comprises that organized part of the personality structure which includes defensive, perceptual, intellectual-cognitive, and executive functions. Consciousawareness resides in the ego, although not all of the operations of the ego are conscious.

In 's theory, the ego mediates among the id, the super-ego and the external world. Its task is to find a balance between primitive drives and reality (the Ego devoid of morality at this level) while satisfying the id and super-ego. Its main concern is with the individual's safety and allows some of the id's desires to be expressed, but only when consequences of these actions are marginal. Ego are often used by the ego when id behavior conflicts with reality and either society's morals, norms, and taboos or the individual's expectations as a result of the internalization of these morals, norms, and their taboos.

The word "ego" is taken directly from , where it is the of the first person singular and is translated as "I myself" to express emphasis. The Latin term "ego" is used in English to translate Freud's German term "Das Ich", which literally means "the I".

In modern-day society, ego has many meanings. It could mean one’s self-esteem; an inflated sense of self-worth; or in philosophical terms, one’s self. However, according to Freud, the ego is the part of the mind which contains the consciousness. Originally, Freud had associated the word ego to meaning a sense of self; however, he later revised it to mean a set of psychic functions such as judgment, tolerance, reality-testing, control, planning, defense, synthesis of information, intellectual functioning, and memory.

In a diagram of the , the ego is depicted to be half in the consciousness, while a quarter is in the and the other quarter lies in the unconscious.

The ego is the mediator between the id and the super-ego, trying to ensure that the needs of both the id and the super-ego are satisfied. It is said to operate on a reality principle, meaning it deals with the id and the super-ego; allowing them to express their desires, drives and morals in realistic and socially appropriate ways. It is said that the ego stands for reason and caution, developing with age. Sigmund Freud had used an analogy which likened the ego to a rider and a horse; the ego being the rider while the id being the horse. The horse provides the energy and the means of obtaining the energy and information need, while the rider ultimately controls the direction it wants to go. However, due to unfavorable conditions, sometimes the horse makes its own decisions over the rocky terrain.

When the ego is personified, it is like a slave to three harsh masters: the id, the super-ego and the external world. It has to do its best to suit all three, thus is constantly feeling hemmed by the danger of causing discontent on two other sides. It is said, however, that the ego seems to be more loyal to the id, preferring to gloss over the finer details of reality to minimize conflicts while pretending to have a regard for reality. But the super-ego is constantly watching every one of the ego's moves and punishes it with feelings of , , and inferiority. To overcome this the ego employs s.

The Super-ego comprises that organised part of the personality structure, mainly but not entirely unconscious, that includes the individual's , spiritual goals, and the psychic agency (commonly called 'conscience') that criticizes and prohibits his or her drives, fantasies, feelings, and actions.

Freud's theory implies that the super-ego is a symbolic internalization of the father figure and cultural regulations. The super-ego tends to stand in opposition to the desires of the id because of their conflicting objectives, and its aggressiveness towards the ego. The super-ego acts as the , maintaining our sense of morality and proscription from taboos. Its formation takes place during the dissolution of the and is formed by an identification with and internalization of the father figure after the little boy cannot successfully hold the mother as a love-object out of fear of castration.

The super-ego retains the character of the father, while the more powerful the Oedipus complex was and the more rapidly it succumbed to repression (under the influence of authority, religious teaching, schooling and reading), the stricter will be the domination of the super-ego over the ego later on — in the form of conscience or perhaps of an unconscious sense of guilt ("", 1923).

In Sigmund Freud's work "Civilization and Its Discontents" (1930) he also discusses the concept of a "cultural super-ego".The concept of super-ego and the Oedipus complex is subject to criticism for its sexism. Women, who are considered to be already castrated, do not identify with the father, and therefore form a weak super-ego, leaving them susceptible to immorality and sexual identity complications.

Advantages of the structural model

The partition of the psyche defined in the structural model is one that 'cuts across' the topographical model's partition of 'conscious vs. unconscious'. Its value lies in the increased degree of diversification: although the Id is unconscious by definition, the Ego and the Super-ego are both partly conscious and partly unconscious.

What is more, with this new model Freud achieved a more systematic classification of mental disorder than had been available previously:

In the 1956 science fiction film "", the murderously destructive forces at large on the planet Altair 4 are eventually revealed to be "monsters from the Id", internal forces unleashed upon the exterior world by the operations of the Krell mind-materialisation machine.

The developer was originally named "Ideas from the Deep" but was later shortened to "id" and took on the Freudian meaning.

In the anime "", the three prime protagonists, Shinji, Asuka and Rei, represent the ego,the id and the superego respectivelyFact|date=September 2008.

Pearl Jam's 1995 single "" describes an anxiety-ridden narrator and his goal of returning to a less controlled state.

In the video game "", instead of controlling Jim, the player controls his super-ego.

The film "" features a song called "Look What I Did To My Id".

In the film "Revolver", the main character (played by ) battles his ego.

In William Golding's "", Jack, Ralph and Piggy represent the struggle between the Id, Ego and Superego.