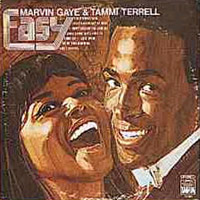 "Easy" is an released by and on , under the label. One song on the album, "Good Lovin' Ain't Easy To Come By", was a hit single and remains popular to this day. Terrell had been ill, suffering from complications caused by a , since the fall of . As a result, most of the female vocals on this album were performed by , who served as co- and co-producer for the LP with her boyfriend and future husband (Simpson is quoted in Ludie Montgomery's biography of Terrell, "My Sister Tommie", as not having subbed Terrell for vocals). The album was released on in 1992, and again in 2001 as part of "The Complete Duets".

"All songs written by unless otherwise noted."

All tracks were produced by save for "I Can't Believe You Love Me" and "More, More, More".