Meltwater is the water released by the melting of snow or ice, including glacial ice and ice shelfs over oceans. Meltwater is often found in the ablation zone of glaciers, where the rate of snow cover is reducing. Meltwater can be produced during volcanic eruptions, in a similar way in which the more dangerous lahars form.

When meltwater pools on the surface rather than flowing, it forms melt ponds. As the weather gets colder meltwater will often re-freeze. Meltwater can collect or melt under the ice's surface. These pools of water, known as subglacial lakes can form due to geothermal heat and friction.

Meltwater provides drinking water for a large proportion of the world's population, as well as providing water for irrigation and hydroelectric plants. Some cities around the world have large lakes that collect snow melt to supplement water supply. Cities that source water from meltwater include Melbourne, Canberra, Los Angeles, Las Vegas amongst others. 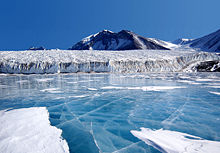 Glacial meltwater comes from glaciers that have receded over time. Often, there will be rivers flowing through glaciers into lakes. These brilliantly blue lakes get their color from "rock flour", sediment that has been transported through the rivers to the lakes. This sediment comes from rocks grinding together underneath the glacier. The fine powder is then suspended in the water and refracts sunlight therefor giving the milky turquoise appearance. 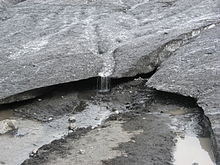 Meltwater also acts as a lubricant in the basal sliding of glaciers. Using GPS measurements to study ice flow has revealed that glacial movement is greatest in summer when the meltwater levels are highest.[1]

Meltwater can be an indication of abrupt climate change. An instance of a large meltwater body is the case of the region of a tributary of Bindschadler Ice Stream, West Antarctica where rapid vertical motion of the ice sheet surface has suggested shifting of a subglacial water body.[2]

It can also destabilize glacial lakes leading to sudden floods, and destabilize snowpack causing avalanches.[3] Dammed glacial meltwater from a moraine-dammed lake that is released suddenly can resulted in the floods that created the granite chasms in Purgatory Chasm State Reservation.

In a report published in June 2007, the United Nations Environment Programme estimated that global warming could lead to 40% of the world population being affected by the loss of glaciers, snow and the associated meltwater in Asia.[3] Historically Meltwater pulse 1A was a prominent feature of the last deglaciation and took place 14.7-14.2 thousand years ago.[4]