Silly Putty
"Silly Puddy" redirects here. For the song by Zion I, see Mind Over Matter (Zion I album). 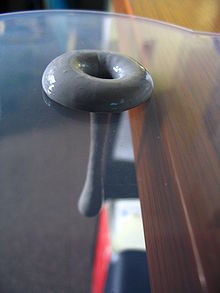 Silly Putty drooping through a hole 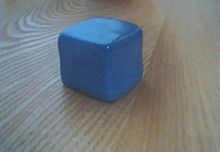 Silly Putty (also marketed by other companies as Thinking Putty, Bouncing Putty, Tricky Putty and Potty Putty), is the Crayola-owned trademark name for a class of silicone polymers. It is marketed today as a toy for children, but was originally created by accident during research into potential rubber substitutes for use by the United States in World War II. The company's manufacturer is based in Easton, Pennsylvania.

As a bouncing putty, Silly Putty is noted for its unusual characteristics: it bounces, but breaks when given a sharp blow; it can also flow like a liquid and will form a puddle given enough time. Silly Putty and most other retail putty products have thixotropic agents added to reduce the flow and enable the putty to hold its shape.

Silly Putty's unusual flow characteristics are due to the ingredient polydimethylsiloxane (PDMS), a viscoelastic liquid. Viscoelasticity is a type of non-Newtonian flow, characterizing material that acts as a viscous liquid over a long time period but as an elastic solid over a short time period. Because its apparent viscosity increases directly with respect to the amount of force applied, Silly Putty can be characterized as a dilatant fluid.

Silly Putty is also a fairly good adhesive. When newspaper ink was petroleum based, Silly Putty could be used to transfer newspaper images to other surfaces, possibly after introducing distortion. Newer papers with soy-based inks are more resistant to this activity.

Silly Putty will dissolve when in contact with an alcohol; after the alcohol evaporates, the material will not exhibit its original properties.

Generally, Silly Putty is difficult to remove from textured items such as hair and clothing. An alcohol like hand sanitizer can often be used successfully to facilitate the process. Crayola (the maker) suggests WD-40. [2]

Silly Putty is flammable. When lit, the flame is a very bright white but burns slowly. The leftover ash crumbles very easily. When Silly Putty is microwaved for about 3 minutes, it becomes very sticky. However, when cooled, the putty returns to its original state. When Silly Putty is baked in an oven at 450 °F (232 °C) for 15 minutes, it gives off noxious fumes. The cookie sheet on which the Silly Putty was baked will have a combination of dried putty and very hot, sticky putty.[3]

If Silly Putty is submerged in warm or hot water, it will become softer and thus "melt" much faster. It also becomes harder to remove small amounts of it from surfaces. After a long period of time, it will return to its original viscosity.

Silly Putty is sold as a 13 g (0.46 oz) piece of plastic clay inside an egg-shaped plastic container. It is available in various colors, including glow-in-the-dark and metallic. The brand is owned by Crayola LLC (formerly the Binney & Smith company), which also owns Crayola crayons. Today,[when?] twenty thousand eggs of Silly Putty are sold daily. Since 1950, more than 300 million eggs of Silly Putty (approximately 4,500 short tons / 4,100 tonnes) have been sold.[citation needed] Other brands offer the material in larger size containers and in a wide variety of colors, such as pink, blue, and yellow.

During World War II, Japan invaded rubber-producing countries as they expanded their sphere of influence in the Pacific Rim. Rubber was vital for the production of rafts, tires, vehicle and aircraft parts, gas masks, and boots. In the U.S., all rubber products were rationed; citizens were encouraged to make their rubber products last until the end of the war and to donate spare tires, boots, and coats. Meanwhile, the government funded research into synthetic rubber compounds to attempt to solve this shortage.[4]

Credit for the invention of Silly Putty is disputed[5] and has been attributed variously to Earl Warrick, of the then newly-formed Dow Corning; Harvey Chin; and James Wright, a Scottish inventor working for General Electric in New Haven, Connecticut.[6] Throughout his life, Warrick insisted that he and his colleague, Rob Roy McGregor, received the patent for Silly Putty before Wright did; but Crayola's history of Silly Putty states that Wright first invented it in 1943. Both researchers independently discovered that reacting boric acid with silicone oil would produce a gooey, bouncy material with several unique properties. The non-toxic putty would bounce when dropped, could stretch farther than regular rubber, would not go moldy, and had a very high melting temperature.

Wright found that the substance did not have all the properties needed to replace rubber, so it was not used for any purpose. In 1945 Wright sent samples to scientists all around the world, but no practical use was ever found.

Finally, in 1949, the putty reached the owner of a toy store, Ruth Fallgatter. She contacted Peter Hodgson, a marketing consultant, to produce her catalog and discuss selling bouncing putty. The two decided to market the product by selling it in a clear case for US$2. The putty proceeded to outsell every item in the catalogue except for 50 cent Crayola crayons. Despite the fortune it made, Fallgatter did not pursue it further; but Hodgson saw its potential.

Already $12,000 in debt, Hodgson borrowed $147 to buy a batch of the putty to pack 1 oz (28 g) portions into plastic eggs for $1, calling it Silly Putty. After selling over 250,000[7] eggs of silly putty in three days, Hodgson was almost put out of business in 1951 by the Korean War. Silicone, a main ingredient in silly putty, was put on ration, harming his business. A year later the restriction on silicone was lifted and the production of Silly Putty resumed. Initially, it was primarily targeted towards adults. However, by 1955 the majority of its consumers were aged 6 through 12. In 1957, Hodgson produced the first televised commercial for Silly Putty, which aired during the Howdy Doody Show.

In 1961 Silly Putty went worldwide, becoming a hit in the Soviet Union, Germany, Italy, Netherlands, and Switzerland. In 1968 it was taken into lunar orbit by the Apollo 8 astronauts.

Carol Haynes indicates that Ruth Fallgater owned a toy shop in New Haven named the "Block Shop". From personal knowledge, (her father was the Vice President of Silly Putty from shortly after its inception until his death in June 1976) she knows that when Peter Hodgson decided to market the toy to Yale students, he initially worked at the Block Shop with a few Yale students. Very soon thereafter, he asked William Henry Haynes, whose family members worked at the Block Shop, to join him in selling and marketing the toy. At some point in the very early years, a recent Yale law school graduate, Mac Kilpatrick, also joined the team. From the beginning until 1976 it was this trio who ran the company. Peter Hodgson was the President of the company; William "Bill" Haynes was the General Manager & Vice President of Silly Putty and also the VP of Arnold Clark, Inc. (an advertising and marketing company)); and Mac Kilpatrick was a V.P and the lawyer for the companies. Since sales were mostly seasonal, there were not many full-time employees; temporary workers were brought in during the peak periods of Easter and Christmas. Haynes indicates that she never knew of Silly Putty being more than $1.00 per egg from its inception to the time that her father died, one month before Peter Hodgson. It was, however, sold at one store in the early years in a silver egg.[citation needed]

Silly Putty was inducted into the National Toy Hall of Fame at The Strong in Rochester, New York, in 2001.

After its success as a toy, other uses were found. In the home, it can be used to pick up substances such as dirt, lint, and pet hair. The material's unique properties have found niche use in medical and scientific applications. Physical therapists use it for rehabilitative therapy of hand injuries. A number of other brands (such as Power Putty and TheraPutty) alter the material's properties, offering different levels of resistance. It is already being sold as a drumhead resonance dampener.[citation needed] The material is also used therapeutically for stress reduction. Because of its adhesive characteristics, it was used by Apollo astronauts to secure their tools in zero-gravity.[8] Scale model building hobbyists use the putty as a masking medium when spray painting model assemblies.[9]