"Make Love, Not Warcraft" is the eighth episode of the tenth season of the animated television series South Park, and the 147th episode overall. It first aired on Comedy Central in the United States on October 4, 2006. In the episode, Cartman, Kyle, Stan and Kenny enjoy playing the popular massively multiplayer online role-playing game (MMORPG) World of Warcraft. When a high level player goes around killing other players in the game, they start playing Warcraft every day to try and stop him.

The episode was written by series co-creator Trey Parker and is rated TV-MA in the United States. The episode takes a satirical look at, and on videogamers.

A griefer named Jenkins (in reference to Leeroy Jenkins)[1] repeatedly kills Cartman, Kyle, Stan and Kenny's characters in the online game, "World of Warcraft". Jenkins is depicted as a silent, obsessive, obese adult player who "has absolutely no life." According to the in-episode Blizzard Entertainment staff, the griefer is said to have been playing the game nearly every hour of every day for a year and a half since the game was released. Due to this, his character has reached a level that was previously thought unreachable, allowing him to disobey Blizzard Entertainment's rules and kill players, Game Masters and even Administrators at will. Stan's father, Randy, becomes interested in the game, but does not survive long before being killed by Jenkins. The game developers soon become worried that the griefer cannot be stopped as he has "no life" followed by one of the developers asking "How do you kill that which has no life?"

Cartman gathers all the boys of South Park and convinces them all to log in at the same time in order to execute a massive retaliatory attack on the griefer. However, once the battle begins, the griefer summons scorpions and easily dispatches the boys' characters. Afterwards, the defeated players give up and find other interests. The executives at Blizzard come to realize that many players will soon become too frustrated from being killed every time they log on, and will stop playing altogether, which would very well cause "the end of the World ... of Warcraft." However, Cartman is not ready to give up, and convinces Stan, Kyle, and Kenny to keep playing. For the next two months, the boys play the game for 21 hours a day, killing low-level boars in the game's forests to gain experience points (in a montage set to Paul Stanley's Live to Win),[2] and hiding from Jenkins. In the process, the boys become lazy, long-haired, overweight and acne-ridden. During this period, they also consume mainly Hot Pockets, Rockstar energy drinks and Ramen noodles and develop large internet vocabularies, using terms such as "über" and "pwned" and "r-tard" in daily conversation. The boys' characters grow so quickly that the Blizzard executives take notice, realizing that the boys have no personal lives at all. They see this as a chance to stop Jenkins since he will end Warcraft's popularity if he is not stopped. However, they calculate that even with the amazing rise in their levels, the boys still have a 90% chance of failure.

Determined to help the boys slay the evil griefer, the executives decide to give the boys the Sword of a Thousand Truths, a weapon so powerful that it was removed from the game. It was stored on a 1 GB USB flash drive as "Salzman from Accounting" foretold that it would eventually be put to use at a time of great need. Unaware of the plan, however, the boys have already initiated what becomes a seventeen-hour battle against the griefer, which the executives predict to be unsuccessful without the aid of the powerful sword. The executives arrive at Stan's house with the flash drive, unaware that the boys are actually at Cartman's house. Randy tells the executives that although he is a "n00b", he can log in with the sword and give it to the boys' characters online. The executives eventually, though reluctantly, give Randy the sword, initially stating that "We can't trust the Sword of a Thousand Truths to a newb!" Eventually logging onto a Warcraft demo at a Best Buy, Randy gives Stan the weapon, but Randy's character is mortally wounded by the griefer in the process. Angered, Stan attacks the griefer with the sword, weakening Jenkins. The boys attack and Jenkins is slain by Cartman, who smashes Jenkin's head with his hammer.

Numerous World of Warcraft players come out of hiding and celebrate the griefer's demise, praising the boys as heroes. Stan asks what they will do next, prompting Cartman to respond "What do you mean? Now we can finally play the game." 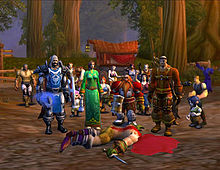 Machinima was used extensively in "Make Love, Not Warcraft". Stan, Kyle, Cartman, and Kenny's characters are shown in the foreground.

The episode uses machinima in many of its scenes to create a better emulation of the game.[3] It was originally scheduled to air as episode #145, but was later delayed because of difficulties in creating the machinima.[4]

South Park creators Trey Parker and Matt Stone collaborated with Blizzard Entertainment to craft the machinima used in the episode. They stated in their commentary for the episode they were completely shocked that the company was on board to help them out. The machinima scenes were created using shots of the in-game footage, and re-creation of the characters in Maya, with Blizzard Entertainment providing their own character models and computers to test with.[4] Blizzard also gave the producers permission to use the alpha server of the expansion pack World of Warcraft: The Burning Crusade to shoot the scenes on.[4] Michael Morhaime, president and co-founder of Blizzard Entertainment, issued a statement over the collaboration:

"We were excited to hear that the creators of 'South Park' were interested in featuring World of Warcraft in the opening of their new season, and we really enjoyed collaborating with them to make this happen. We're looking forward to sharing the experience with our employees and our players as well when the season debuts this week."[5]

As a reference to the episode, certain South Park Season 10 DVDs include a 14-day free trial for the World of Warcraft. This did not affect the UK release of this season in 2009.[6]

Since the airing of the episode, the fictitious Sword of a Thousand Truths was featured in the World of Warcraft: The Burning Crusade beta test as a reward to the games arena system, although it did not have the same capabilities as in the show. The in-game caption read "Finely crafted to Salzman's specification."[7] The sword was renamed to Gladiator's Slicer and the in-game graphic changed prior to the launch of the Burning Crusade. The visual used for the Sword of a Thousand Truths in the episode was the same as the already existing in-game sword The Hungering Cold. More recently, the sword has reappeared in the World of Warcraft: Wrath of the Lich King expansion as the Slayer of the Lifeless (a reference to the line within the episode, "How do you kill that which has no life?"), an entry-level raid drop that possesses the flavor text "Foretold by Salzman."

Although the planning of the episode and data-collecting began on September 1, 2006, the actual production of the machinima was done in five "shooting" days, the first being September 20, 2006, which lasted about 3–5 hours, and the last being October 3, 2006.[4] The regular South Park animation was created simultaneously, with all the other non-machinima episodes of the series routinely finishing within 12 hours of their airing as well.[4][8]

In patch 3.0.2, preceding the release of the World of Warcraft expansion pack, Wrath of the Lich King, Blizzard included a "Make Love, Not Warcraft" PvP achievement, gained by using the "hug" emote on a dead enemy before they release their spirit.[9] The fictitious video game played by Butters, Hello Kitty: Island Adventure, was referenced in a 2008 April Fools Day joke by the actual MMORPG Hello Kitty Online, announcing an "Island Adventure" expansion for the game, boasting a reduction of content rather than an "expansion", leaving players stranded on a tropical island.[10]

The episode received high review ratings. IGN, a multimedia news and reviews website, reviewed the episode and gave it an overall rating of 9.3, labeling it as "one of the funniest episodes ever produced."[11]

The original television airing of the episode drew 3.4 million viewers, most between the ages of 18 and 49.[12] This popularity made the episode Comedy Central's highest-rated midseason premiere since the year 2000.[12] However, the highest ratings for the tenth season belong to the season's premiere, "The Return of Chef", which drew more than 3.5 million viewers.[13]

In 2007, this episode won the Primetime Emmy Award for Outstanding Animated Program (for Programming Less Than One Hour).[14]

In 2008, on Comedy Central in the United Kingdom, fans voted this as their favorite episode of all time in a list of top ten best episodes.[citation needed]

In 2010, Comedy Central X in the United Kingdom voted the episode number 2 in the 100 Best South Park Episodes, losing the top spot to "Scott Tenorman Must Die".[citation needed]