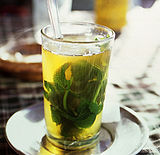 A cup of mint tea

Moroccan tea culture (Arabic: الشاي‎ - as-shāy , Moroccan Arabic: اتاي - Ataí) is defined by the way tea (exclusively green tea) is prepared and consumed in Morocco, where it is widely consumed with food. The tradition has also spread throughout North Africa, parts of the Sahel, and southern Spain. Tea occupies a very important place in Moroccan culture and is considered an art form. Morocco is one of the biggest tea importers of the world.

Moroccan mint tea is a green tea with mint leaves.

Moroccan-style mint tea is now commonly served all through the West Arab World (North Africa). It is served not only at mealtimes but all through the day, and it is especially a drink of hospitality, commonly served whenever there are guests. Unlike Moroccan food, cooked by women, this tea is traditionally a man's affair: prepared by the head of the family. It is served to guests, and it is impolite to refuse it.

Morocco, Tunisia and Algeria, countries where it is most often drunk, consume respectively 1.4, 1.5 and 0.7 kg of tea yearly per capita.

It is believed that green tea was first introduced to Morocco in the 18th century, and began spreading through the country in the mid-19th century at the time the trade between the Maghreb and Europe started flourishing. It is reported that Sultan Moulay Ismail received many bags of tea and sugar as gifts and recompenses given by European envoys in order to release European prisoners.

The main provider of tea to Morocco remains China. According to the Moroccan trade ministry, Morocco imported more than $56 million worth of Chinese tea during the first half of 2006. Morocco is considered the first importer of Chinese green tea worldwide.[1]

The method of preparation of atai is relatively complex and varies from region to region. It is normally sweeter in the north of Morocco than in the south, and in some places, pine nuts are added. In the winter, if mint is rare, sometimes leaves of wormwood (chiba or sheeba in Moroccan Arabic) are substituted for (or used to complement) the mint, giving the tea a distinctly bitter flavor. Lemon Verbena (louiza in Moroccan) is also used to give it a lemony flavor. 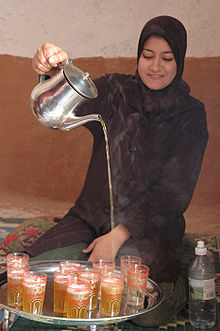 Moroccan tea being served. It is poured from a distance to produce a foam on the tea.

The typical green tea used is a gunpowder tea variety imported from China. A simple and practical method runs as follows:

Nowadays many Moroccans choose to drink green tea without mint because of health concerns related to the large quantities of pesticides used in mint cultivation[citation needed].

Traditionally the tea is served three times, and the amount of time the tea has been steeping gives each of the three glasses of tea a unique flavor, described in this famous proverb: