Cast stone is defined as “a refined architectural concrete building unit manufactured to simulate natural cut stone, used in unit masonry applications”. In the UK and Europe cast stone is defined as “any material manufactured with aggregate and cementitious binder, intended to resemble in appearance, and which may be used in a similar way to, natural stone”. Cast stone is a masonry product, used as an architectural feature, trim, ornament or facing for buildings or other structures. Cast stone can be made from white and/or grey cements, manufactured or natural sands, carefully selected crushed stone or well graded natural gravels and mineral coloring pigments to achieve the desired color and appearance while maintaining durable physical properties which exceed most natural cut building stones. Cast stone is an excellent replacement for natural cut limestone, brownstone, sandstone, bluestone, granite, slate, coral rock, travertine and other natural building stones. 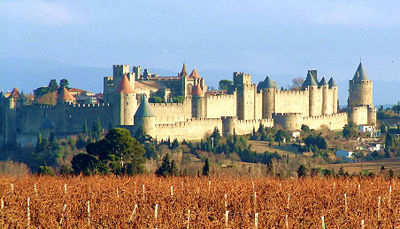 The walled city of Carcassonne

Cast stone has been a prime building material for hundreds of years. The earliest known use of Cast stone dates about to the year 1138 and was seen at Carcassonne, France, the city which contains the finest remains of medieval fortification in Europe. Cast stone was first used extensively in London in the 19th century [1] and gained widespread acceptance in America in 1920.[2]

Some researchers have even speculated that the Egyptian pyramids were formed using a form of cast stone, rather than from cut blocks.[3]

One of the earliest developments in the industry was Coade stone, a fired ceramic, but most artificial stone consists of fine cement concrete placed to set in wooden, rubber lined fiberglass or iron moulds. It was cheaper and more uniform than natural stone, and widely used. In engineering projects, it had the advantage that transporting the bulk materials and casting them near the place of use was cheaper than transporting very large pieces of stone.

The first recorded commercial production of a cement based cast stone material in the format we know today, was in the late 1820s when Felix Austin went into business making artificial stone in New Road (now Euston Road), London, England. His material was not the same as the ceramic body used by Mrs. Coade, (although he is known to have copied old Coade stone designs), but made from 'Portland cement, broken natural stone, pounded marble and coarse sand' ('The Builder', 1868, now Building (magazine)). Around 1840 Austin entered into partnership with John Seeley. Seeley had trained at the Royal Academy Schools and also made an artificial stone, which he called ' artificial limestone ', before entering into partnership with Austin. In 1841 Austin and Seeley published their first catalogue, 'Collection of Ornaments at Austin & Seeley's Artificial Stone Works for Gardens, Parks and Pleasure Grounds'. The firm continued in production until about 1872.[4]

Another well-known variety was Victoria stone, which is composed of finely crushed Mount Sorrel (Leicestershire) granite and Portland cement, carefully mixed by machinery in the proportions of three to one, and filled into moulds of the required shape. When the blocks are set hard the moulds are loosened and the blocks placed in a solution of silicate of soda for about two weeks for the purpose of indurating and hardening them.

Many manufacturers turn out a material that is practically non-porous and is able effectually to resist the corroding influence of sea air or the impure atmosphere of large towns.

Today, cast stone is a Portland cement-based architectural precast concrete product manufactured using high quality fine and coarse aggregate as its primary constituents. The use of a high percentage of fine aggregate creates a very smooth, consistent texture for the building elements being cast, resembling natural cut stone. Other ingredients such as chemical admixtures, pozzolans, and pigments also may be added.

Cast stone frequently is produced with a low water-to-cement ratio mixture with a "dry" (or "earth moist") consistency. The mixture is consolidated into a mould using an air-driven tamping device or vibration under pressure, which is much like the formation of natural sedimentary rock. Products manufactured in this manner are referred to as vibrant-dry-tamped (VDT) cast stone. For cast stone mixtures produced with a slumpable consistency mixture, the concrete typically is consolidated using internal or external vibration applied to the production mould.

Over the last decade, new types of admixtures have been developed for VDT concrete products. These new admixtures do not normally work with "wet cast" concrete. These new plasticizers are more efficient than using air-entraining agents to increase compaction in VDT concrete. Some plasticizers have chemical properties that react with the cement to increase ultimate strengths of semi-dry concrete. Another important type of admixture for VDT concrete is integral waterproofing formulas. Tests have shown that some of these integral waterproofing admixtures have improved strength by as much as 20% while reducing the absorption by 40%. The increased strength and reduced absorption results in improved freeze/thaw durability.

On recent commercial testing laboratory results the freeze-thaw for VDT concrete using integral waterproofing admixtures was 0.23% weight loss after 300 cycles. Air entraining agents have been the salvation of wet cast concrete as it pertains to its durability. Wet cast concrete with 4% to 6% entrained air normally can withstand numerous freeze-thaw cycles without failing. Other types of admixtures such as water-reducers, super plasticizers and the new self-compacting additives can add to improving the strength and durability of wet cast concrete products. Cast stone products manufactured by the wet cast method are required to meet the same standards as VDT cast products.

Today, the Industry Standard for physical properties and raw materials constituents is ASTM C 1364, the Standard Specification for Architectural Cast Stone. Membership in ASTM International (founded in 1898 as the American Chapter of the International Association for Testing and Materials and most recently known as the American Society for Testing and Materials) exceeds 30,000 technical experts from more than 100 countries who comprise a worldwide standards forum. The ASTM method of developing standards has been based on consensus of both users and producers of all kinds of materials. The ASTM process ensures that interested individuals and organizations representing industry, academia, consumers, and governments alike, all have an equal vote in determining a standard's content.

In the UK and Europe it is more normal to use the Standard “BS 1217 Cast stone - Specification” from the BSI Group, and the European Commission's “Construction Products Regulations” legislation states that by mid 2013, all cast stone sold in Europe must be certified to this standard.