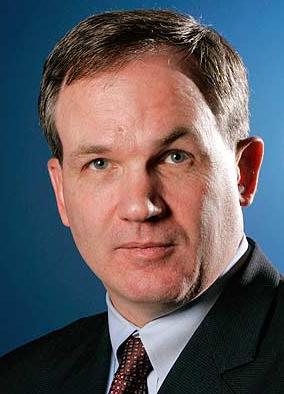 Patrick J. Fitzgerald (born , ) is an American attorney and the current United States Attorney for the Northern District of Illinois. On , after then-Attorney General recused himself from the of the due to conflicts of interest, Deputy Attorney General , acting as Attorney General in Ashcroft's place, appointed Fitzgerald to the in charge of the investigation. [cite news | last =Savage | first =Charlie | title =Ashcroft Steps Aside in Probe Into CIA Leak | publisher = | date = | url =http://www.boston.com/news/nation/articles/2003/12/31/ashcroft_steps_aside_in_probe_into_cia_leak/ | accessdate =2006-09-16] [cite web | authorlink = | title = Why Did Attorney General Ashcroft Remove Himself From The Valerie Plame Wilson Leak Investigation? | publisher = | date = | url = http://writ.news.findlaw.com/dean/20040106.html | accessdate = 2006-09-16]

Fitzgerald was born into a working-class Catholic family in and grew up in the Midwood- neighborhood. His father (also named Patrick Fitzgerald) worked as a doorman in . His parents both came from Co Clare, Ireland and he regularly visits the country. The last time he visited Ireland was at the Chicago Bar Association Conference in association with the School of Law (University College Dublin)March 2007

Fitzgerald attended Our Lady Help of Christians grammar school, Regis High School, a prestigious in Manhattan, and received degrees in and from before receiving his JD from in 1985. [cite news | last = Slevin | first = Peter | title = The Prosecutor Never Rests | publisher = | date = | url = http://www.washingtonpost.com/wp-dyn/articles/A55560-2005Feb1.html | accessdate = 2006-09-16] While at Harvard, Fitzgerald was a member of the Harvard Business School Rugby Club.

In 1996, Fitzgerald became the National Security Coordinator for the Office of the U.S. Attorney for the Southern District of New York. There, he served on a team of prosecutors investigating . [cite web| last =Fitzgerald | first=Patrick | title = Testimony of the Honorable Patrick Fitzgerald before the Senate Judiciary Committee | publisher = | date = | url = http://judiciary.senate.gov/testimony.cfm?id=965&wit_id=2741 | accessdate =2006-09-16] He also served as chief counsel in prosecutions related to the in and .

On , Fitzgerald was nominated for the position of U.S. Attorney for the Northern District of Illinois on the recommendation of U.S. Senator (no relation), a Republican from . On , the nomination was confirmed by the Senate.

Soon after becoming U.S. Attorney for Northern Illinois, Fitzgerald began an investigation of political appointees of Republican Illinois Governor , who were suspected of accepting bribes to give licenses to unqualified truck drivers. Fitzgerald soon expanded this investigation, uncovering a network of political bribery and gift-giving, and leading to more than 60 indictments. Ryan, who did not seek re-election in 2002, was indicted in December 2003. At the conclusion of the trial, in April 2006, Ryan was found guilty on all eighteen counts against him. Ryan's co-defendant, Chicago businessman Larry Warner, 67, was convicted of racketeering conspiracy, fraud, attempted extortion, and money laundering. The two were sentenced on : Ryan received a sentence of six and one half years, and Warner received a sentence of three years, five months. [cite news | last = Korecki | first = Natasha | coauthors = Herman, Eric & Pallasch, Abdon | title =6 1/2 years for George Ryan | publisher = | date = | url =http://www.suntimes.com/output/ryan/cst-nws-ryan075.html | accessdate =2006-09-16]

Against criticism that these cases were based on circumstantial evidence, Fitzgerald responded: "People now know that if you're part of a corrupt conduct, where one hand is taking care of the other and contracts are going to people, you don't have to say the word 'bribe' out loud.... And I think people need to understand we won't be afraid to take strong circumstantial cases into court." [cite news | last = Davey | first = Monica | coauthors = Ruethling, Gretchen| title = Former Illinois Governor is Convicted in Graft Case| publisher = | date = | url=http://www.nytimes.com/2006/04/18/us/18ryan.html?ex=1303012800&en=b2e2db299e1900dd&ei=5090&partner=rssuserland&emc=rss| accessdate =2006-09-16]

On , Fitzgerald's office indicted a number of top aides to Democrat , the , on charges of , alleging numerous instances of corruption in hiring practices at City Hall. Fitzgerald is also investigating the administration of current Illinois Governor . An investigation announced on will review contracts between the and vendors who signed leases to occupy the recently remodeled Illinois Tollway oases. Fitzgerald's office is investigating possible conflicts of interest between these vendors and one of Blagojevich's top fundraisers, .

In March 2006, former Chicago City Clerk pled guilty to pocketing nearly $50,000 in bribes for steering city business to two trucking companies. Thus far Laski is the highest-ranking Chicago official and Daley administration employee brought down by Fitzgerald's office in conjunction with the scandal.

U.S. Senator Peter Fitzgerald chose not to run for reelection in 2004, leaving Patrick Fitzgerald without a congressional patron. In the summer of 2005, there were rumors that he would not be reappointed to a second four-year term in retaliation for his conduct in investigations into corruption in Illinois and Chicago government, as well as for his investigation of the Plame scandal. [cite news | last =Pallasch | first =Abdon | title =Is Fitzgerald's Time Up? | publisher = | date = | url =http://www.suntimes.com/output/elect/cst-nws-fitz04.html | accessdate =2006-09-16] Those "rumors" were not realized, Fitzgerald is now completing his seventh year as US Attorney.

On , three months after the start of the Plame investigation, Fitzgerald was appointed Special Counsel (under Department of Justice regulation 28 CFR Part 600). Through this, Fitzgerald was delegated "all the authority of the Attorney General" in the matter. In February 2004, Acting Attorney General Comey clarified the delegated authority and stated that Fitzgerald has . Comey also wrote "further, my conferral on you of the title of 'Special Counsel' in this matter should not be misunderstood to suggest that your position and authorities are defined and limited by 28 CFR Part 600." [cite paper | author= | title =B-302582, Special Counsel and Permanent Indefinite Appropriation | publisher =Government Accountability Office | date = | url =http://www.gao.gov/decisions/appro/302582.htm | accessdate =2006-09-16]

On , Fitzgerald brought an indictment for 5 counts of false statements, perjury, and obstruction of justice against Lewis "Scooter" Libby, U.S. Vice President 's Chief of Staff. Libby resigned to prepare for his legal defense. Fitzgerald indicated that the leak investigation was not over, and it was widely believed that was the main target of the investigation, although Fitzgerald refused to comment on any specific person.

In his first press conference after announcing Libby's indictment, Fitzgerald was asked about comments by Republicans such as , who said "I certainly hope that if there is going to be an indictment that says something happened, that it is an indictment on a crime and not some perjury technicality..." Fitzgerald responded, "That talking point won't fly... The truth is the engine of our judicial system. If you compromise the truth, the whole process is lost . . . if we were to walk away from this, we might as well hand in our jobs." [cite news | last =FDCH e-Media | title =Transcript of Special Counsel Fitzgerald's Press Conference | publisher = | date = | url =http://www.washingtonpost.com/wp-dyn/content/article/2005/10/28/AR2005102801340.html | accessdate =2006-09-16]

By , some bloggers were reporting that on the basis of interviews with people close to the Plame investigation, indictments against Rove or National Security Adviser were imminent. However, by mid-June 2006, it was announced that no charges were going to be brought against Rove. In early April, "" ran a front page story linking Libby to a leak, supposedly ordered by Dick Cheney, that Iraq had been attempting to acquire uranium in 2002. By the thirteenth of the month, many media outlets, including the "New York Times", retracted this story, after discovering that the basis of this claim was based on papers filed with the courts the previous week. These papers themselves were corrected via formal statements from Fitzgerald.

On , Christopher Hitchens claimed that was the primary source of the Valerie Plame leak, and that Fitzgerald knew this at the beginning of his investigation. [cite web | last = Hitchens | first= Christopher | authorlink =Christopher Hitchens | title =Plame Out: Plamegate's ridiculous conclusion | publisher =Slate | date = | url =http://www.slate.com/id/2148555 | accessdate =2006-09-16]

Robert Novak's testimony in the Lewis Libby perjury trial made it known that the two senior administration sources he cited in his article were Richard Armitage and Karl Rove. [http://www.cnn.com/2007/POLITICS/02/12/cia.leak/index.html] Journalist Michael Isikoff received confirmation from Rove's lawyer and from lobbyist Richard Hohlt that Rove was also faxed an advance copy of the article revealing a CIA covert agent's identity several days before it was published. [http://www.msnbc.msn.com/id/17202408/site/newsweek/]

On March 6th 2007, Libby was convicted of 4 out of 5 charges of lying under oath. Fitzgerald announced on the courthouse steps that while he is always open to receiving new information related to the case, he expects to file no further charges, and the prosecutors will "return to their day jobs." Libby was sentenced to a $250,000 fine, 2 years of probation and a 2 1/2 year prison term. After a court of appeals rejected Libby's attempt to delay the prison sentence while he appealed the verdict, President George W. Bush commuted the prison portion of Libby's sentence.

Two days after the verdict, Congressman , chair of the , announced that his committee would ask Plame to testify on March 16, in an effort by his committee to look into "whether White House officials followed appropriate procedures for safeguarding Plame's identity." [cite news | title=Plame to testify to Congress on leak | publisher=Reuters | date=, | url=http://www.washingtonpost.com/wp-dyn/content/article/2007/03/09/AR2007030900549.html]

In March 2007, it was revealed that Fitzgerald "was ranked among prosecutors who had 'not distinguished themselves' on a Justice Department chart sent to the White House in March 2005...." [cite news | title=Fitzgerald Ranked During Leak Case | publisher=Washington Post | date=, | url=http://www.washingtonpost.com/wp-dyn/content/article/2007/03/19/AR2007031902036.html?sub=AR] This was revealed in light of an investigation of the December 2006 firings of several U.S. Attorneys by Attorney General Alberto Gonzales, perceived as being politically motivated and despite his previous Attorney General's Award for Distinguished Service in 2002. [cite news | last =Eggen | first =Dan | last =Solomon | first =John | title =Gonzales aide rated Fitzgerald mediocre | publisher = | date = | url =http://www.chicagotribune.com/news/nationworld/chi-0703200151mar20,1,807063.story?coll=chi-news-hed | accessdate =2007-04-11] The Washington Post article states that two other prosecutors so ranked were dismissed.

On July 2, 2007, President Bush provided a statement [ [http://www.whitehouse.gov/news/releases/2007/07/20070702-3.html Statement by the President on Executive Clemency for Lewis Libby] ] on his decision to commute Mr. Libby's prison sentence and noted,

"After the investigation was under way, the Justice Department appointed United States Attorney for the Northern District of Illinois Patrick Fitzgerald as a Special Counsel in charge of the case. Mr. Fitzgerald is a highly qualified, professional prosecutor who carried out his responsibilities as charged."

On , Fitzgerald brought criminal charges against former , Lord Conrad Black, as well as against three other executives.

On October 18, 2007, the Washington Post broke the story of Fitzgerald's engagement to Jennifer Letzkus. It is his first marriage and her second (Letzkus was married from 2001-2004 to Cisco executive Jeremy Crisup). They are runners and stair climbers, having completed a Turkey Trot, the Mt. Washington climb, and the 23rd Annual New Year's Day 5K Run/Walk, among other events. They were married in a small ceremony on June 7, 2008.

Fitzgerald has repeatedly been the subject of speculation about his possible nomination to be Attorney General. These voices, ranging from his undergraduate alma mater's magazine to the Washington Post [http://blog.washingtonpost.com/benchconference/2007/03/gonzopart_ivmeet_your_new_atto.html] to political blog Fudge Yeti [http://fudgeyeti.blogspot.com] have either speculated about or called for Fitzgerald's prospects for the top job at the Justice Department. As of June 2008, neither presidential candidate has commented on this possibility.