Black Widow is the name of several fictional superheroines appearing in comic books published by Marvel Comics. Most of these versions exist in Marvel's main shared universe, known as the Marvel Universe.

Claire Voyant was one of the first costumed, superpowered female protagonists in comics created by writer George Kapitan and artist Harry Sahle. She first appeared in Mystic Comics #4 (August 1940). The character is an antihero who kills evildoers to deliver their souls to Satan, her master. The character is unrelated to the later Marvel Comics superheroines who took on the codename.

Natalia "Natasha" Alianovna Romanova[1] is the first character to take on the Black Widow codename in the modern mainstream Marvel Comics. She was created by editor and plotter Stan Lee, scripter Don Rico and artist Don Heck, and first appeared in Tales of Suspense #52 (April 1964). The character has been associated with several superhero teams in the Marvel Universe, including The Avengers, The Defenders, S.H.I.E.L.D., and the Thunderbolts. She has appeared in many other forms of media, including the major motion picture Iron Man 2, where she was portrayed by actress Scarlett Johansson.

Yelena Belova, the second modern mainstream Black Widow after Natalia Romanova, debuted briefly in Inhumans #5 (March 1999). She was fully introduced in the 1999 Marvel Knights mini-series Black Widow. A second miniseries, also titled Black Widow and featuring Natasha Romanoff and Daredevil, followed in 2001. The next year, she did a solo turn in her own three-issue miniseries, also titled Black Widow (officially Black Widow: Pale Little Spider in the series' postal indicia) under the mature-audience Marvel MAX imprint. This June to August 2002 story arc, by writer Greg Rucka and artist Igor Kordey, was a flashback to the story of her becoming the second modern Black Widow, in events preceding her Inhumans appearance. 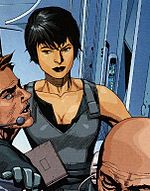 Monica Chang, the second Black Widow in the Ultimate Marvel continuity, appears in Ultimate Comics: Avengers. She is Asian-American, and is the ex-wife of Nick Fury. Despite the painful memories associated with the previous Black Widow (Natasha Romanoff), she refuses to change her codename. It is revealed that Monica had married Fury years earlier, but the marriage fell apart after she discovered that he had been sleeping with various female members of her family and limited social circle, including her own mother.

On the Avengers, she helps capture and recruit the Punisher into the team.[2]