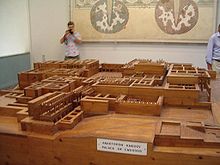 Model of the "Palace of Minos" on Kephala at the Museum in Iraklio. Note the central courtyard, the columned porticos, the agglutinative architecture, the frequent light wells and the lack of defenses. Not shown are the extensive water supply and sanitation systems.

Sir Arthur Evans developed a relative dating scheme of Minoan chronology based on the excavations initiated and managed by him at the site of the ancient city of Knossos. He called the civilization that he discovered there Minoan. The same scheme was later applied to the Greek mainland and the Cyclades Islands to form a general plan for dating events of the prehistoric and early historic Aegean. The relative chronology is based on the shapes and decorative styles of pottery found at many sites on Crete and elsewhere.

Arthur Evans began excavating on a hill called tou tseleve he kephala, "the headland of the chieftain", some three miles (5 km) from the north coast of Crete, on March 23, 1900. Two of the palace storerooms had been uncovered by Minos Kalokairinos in 1878, whose work ceased at the demand of the land owners. Simultaneously, coins and seals inscribed with a mysterious script were also discovered. These came to Evans' attention as the curator of the Ashmolean Museum at Oxford, a position he held from 1884 to 1908. The area was rumored to have been the site of the ancient city of Knossos.

Evans examined the site on March 19, 1894. Nothing further could be done at that time, but in 1898 Crete became an independent republic. In 1899 Evans purchased the land with his own funds (his family had been factory owners in industrial Britain) and decided to set up an excavation. In the first two weeks he discovered the Linear A tablets, a streak of luck exceeded only by Carl Blegen's legendary first day's dig at Pylos, when he uncovered the Pylos tablets, written in Linear B, a script also found at Kephala and named by Evans.

Photograph of the Palace.

Another View of the Palace.

Attacking the site with crews of hundreds of diggers, Evans uncovered most of the site's 6 acres (24,000 m2) within 6 seasons. By 1905 he had named the civilization whose traces he found there Minoan, after the legendary king Minos, and had created a detailed chronology of the serial phases of the pottery styles in Minoan Crete, based on what he found at Knossos. Subsequently he concerned himself mainly with restoration, an activity frowned upon by archaeologists of today. He continued to excavate there and elsewhere and to restore[1] until 1935.

Evans was knighted in 1911 for his work. In 1921, the first edition of his monumental work, Palace of Minos, was released, which became a sine qua non for any department of classical archaeology. On Evans' death in 1941, the British School of Archaeology assumed responsibility for the excavation, later turning the property over to the Greek government, while retaining excavation rights.

Evans' chronological framework had triple divisions each triply divided, a formula that has been retained, thus Early Minoan (EM) I, II and III, Middle Minoan (MM) I, II and III etc. Each subsection he divided into A and B, early and late. In 1918 Alan J. B. Wace and Carl Blegen adapted Evans' chronology to the Greek mainland and the islands, where the culture was termed Helladic and Cycladic. In 1941 Arne Furumark applied the term Mycenaean to LH and LC. As it is clear that the Mycenaean Greeks dominated at Knossos at some point in Late Minoan (LM), the latter is often included under "Mycenaean" or called "Minoan-Mycenaean".

The major study of Cretan pottery was Evans'. A very general trend of facture was from dark decoration on a light background in the Early Minoan to white and red decorations on a dark wash of slip in Middle Minoan, and finally a return to the earlier manner of dark on light in Late Minoan.[2] New body shapes for vessels also emerged and various styles of decoration are evident within Evan's chronology.

Evans never intended to give exact calendrical dates to the pottery periods. He did correlate them roughly to better dated Egyptian periods using finds of Egyptian artifacts in association with Cretan ones and obvious similarities of some types of Cretan artifacts with Egyptian ones. Subsequent investigators checking Evans' work varied the dates of some of the periods a little, usually less than a few hundred years, but the chronological structure remains basically as Evans left it, a solid framework for placing events of Aegean prehistory.

Most criticism does not aim at the overthrow of Evans' system, but only complains that it does not capture all the data, such as local variations. Even with these faults the system has no competitors. In 1958 Nikolaos Platon proposed a new chronology at the Prehistoric Conference in Hamburg. In it, the terms "Pre-palace", "Old Palace" and "New Palace" were to replace Evans' scheme. The academic community accepted the scheme but not the replacement, simply stating where in Evans' system the new terms fit.

The one serious question[3] concerns the date of the Knossos tablets. Allegations were made that Evans falsified the stratum in which the tablets were found to place the tablets at 1400 BCE when they ought to have been the same date as the Pylos tablets, 1200 BCE. This dispute became known as the Palmer-Boardman Dispute when it first appeared. Despite the intense debate that developed on the subject no conclusive evidence has yet been found to settle the question. A key part of the case was that a certain kind of vase, a stirrup jar (named from the handles) found in tablet contexts, is dated only to 1200. Other archaeologists hastened to the journalistic scene with instances of similar jars going back to 1400. The search for closure goes on. By default, archaeologists tend to use Evans' dating.

Other tables on the Internet

The search for a consistent chronology of Cretan civilization goes on. Other tabular chronologies have been published on the Internet by