Metroad 4 is a Metroad in Sydney, New South Wales, Australia. It connects the inner-west of Sydney with the outer western suburbs. It mostly follows what was previously National Highway 32 from the Western Distributor in the CBD, west to the Great Western Highway (Route 32) at Lapstone. Metroad 4 replaced the previous Sydney stretch of National Route 32, being the first Metroad introduced. It was proclaimed in September 1992.

From west to east, the major intersections along the route are: 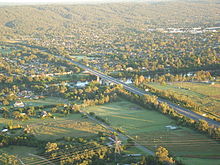 The M4 Western Motorway was opened in stages between the early 1970s and 1993. Earlier sections predated the Metroad system, however the completed motorway was designated part of Metroad 4 and among the first uses of the hexagonal Metroad markers.