A novice is a person or creature who is new to a field or activity. The term is most commonly applied in religion and sports. 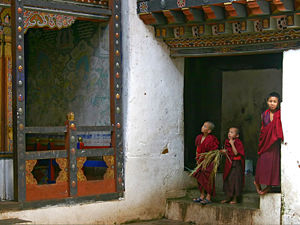 In many Buddhist orders, a man or woman who intends to take ordination must first become a novice, adopting part of the monastic code indicated in the vinaya and studying in preparation for full ordination. The name for this level of ordination varies from one tradition to another. In Pali, the word is samanera, which means 'small monk' or 'boy monk'.

A novice in Roman Catholic canon law and tradition, is a prospective member of a religious order who is being tried and being proven for suitability of admission to a religious order of priests, religious brothers, or religious sisters, whether the community is one of monks or has an "active" ministry. After initial contact with the community, and usually a period of time as a postulant (a more or less formal period of candidacy for the novitiate), the person will be received as a novice in a ceremony that most often involves being clothed with the religious habit (traditional garb) of the particular religious community. The novice's habit is often slightly different from those of professed members of the order. For instance, in communities of women that wear a dark veil over the head, novices often wear a white one; among Franciscan communities of men, novices wear an additional shirt-like chest piece over the traditional Franciscan robe; Carthusian novices wear a dark cloak over the usual white habit; etc.

Novices are not admitted to vows until they have successfully completed the prescribed period of training and proving, called the novitiate. This usually lasts one year, the minimum required by Canon Law, though in some orders and communities it is two. Novices typically have dormitories in separate areas within a monastery or community and are under the direct supervision of a novice master or novice mistress.

In the Orthodox Church, a candidate may be clothed as a novice (Slavonic: послушник, poslushnik, lit. "one under obedience") by the Hegumen (Abbot) or Hegumenia (Abbess) after at least three days in the monastery. There is no formal ceremony for the clothing of a novice; he (or she) would simply be given the Riassa, belt and Skoufos. Novice nuns additionally wear a veil (apostolnik) that covers the head and neck. A novice is also given a prayer rope and instructed in the use of the Jesus Prayer. In large communities, the new novice may be assigned a Starets (spiritual father or spiritual mother) who will guide his spiritual development. Frequent confession of sins and participation in the Sacred Mysteries (Sacraments) of the Church is an important part of Orthodox monastic life.

A novice is free to leave the monastery at any time, and the superior is also free to dismiss the novice at any time if, for instance, he or she feels the novice is not called to monasticism or if there have been discipline issues. If, however, the novice perseveres, after a period of around three years the Hegumen may choose to clothe the him in the first (beginning) rank of monasticism: the Rassaphore.

In National Hunt racing, a novice is a horse that has not won a race under a particular code (either chasing or hurdling) before the current season.[1] Another term is maiden. It also sometimes refers to a race for two-year-old horses that have not won more than twice.

In figure skating competitions, novice has two meanings. For the U.S. Figure Skating Association, it refers to a skill level, while the International Skating Union uses it to designate age.

Novice is a level of minor hockey in Canada. Novice players are usually between the ages of 7 and 8.

In the sport of crew (rowing), the term is used for an athlete in their first year of competition.