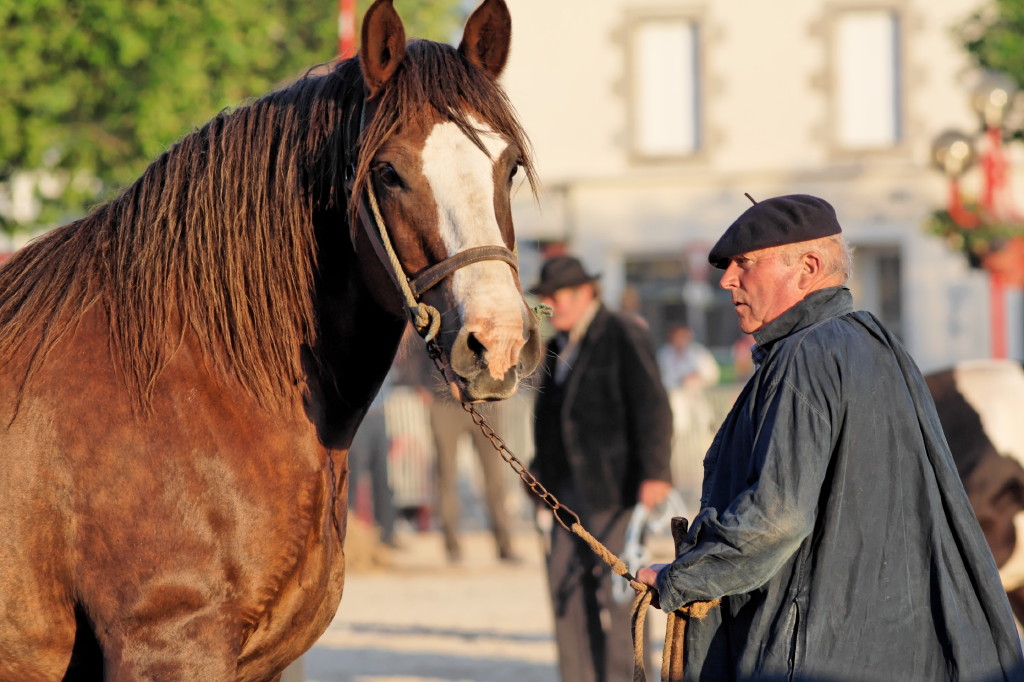 The Breton is a breed of . It developed in , a province in Northwest , from native ancestral stock dating back thousands of years. It has been used in , draft and agricultural capacities. There are three distinct subtypes of the Breton breed, each coming from a different section of Brittany.

The Breton is usually chestnut (often with a flaxen mane and tail), but can also be bay, grey, or red or blue roan. They have well-proportioned heads of medium volume with a straight profile, a strong, short neck well-set into muscular withers. The shoulder is long and sloping, the chest broad and muscular, the back is short and wide, and the croup sloping. The legs are short, but powerful, with broad joints and well-formed hooves. The legs are feathered.

There are three types of the Breton, coming from different districts of Brittany.
* The Corlay Breton, also called Central Mountain Breton
* The Postier Breton
* The Heavy Draft Breton

The Corlay Breton is derived from crossbreeding with the Arabian and . It is about 14.3 hands to 15.1 hands high. The Corlay is considered the real descendant of the original Breton. It has the same general features as the draft type, but is smaller with a more dished face. It was used mainly for light draft work that required speed and under saddle, and its numbers have been decreasing in recent years.

The Postier Breton was developed as a result of crossbreeding with the and the Hackney during the 19th century. It has a very attractive gait, and stands about 15.1 hh. It is bred mainly in central Brittany, is a good coach horse and capable of light ing work. Its name comes from the practice of using the type to pull mail coaches.

The Heavy Draft Breton is derived from an infusion of and blood. It is very strong, relative to its size. It is bred in the northern coastal area of Brittany (Leon). It stands about 15.2 hands to 16.2 hands, and has short but muscular legs. This type has absorbed another, older type, called the Grand Breton, a heavier horse that was used to improve many other draft breeds.

The Breton was bred for great strength and durability. Horses have been present in the Breton mountains for thousands of years, but nobody knows how they first arrived.

In the , the ancestral Breton horse was sought by military leaders, partly because of its comfortable gait, which was said to be partway between a brisk trot and an amble. Due to its gaits and the fact that it only stood about 14 hands high, it was nicknamed the "Bidet d'Allure" or "Bidet Breton." Horses of other bloodlines brought back to during the had a strong influence on the Breton, and two types subsequently developed. The "Sommier" was a heavier type used mainly as a pack horse and the "Roussin" was used mainly in wars and on long journeys.

From the until the early 1900s, the Breton was crossed with various horses, both native and foreign, including the , and Ardennes breeds. In the 19th century it was crossbred with the , which resulted in a lighter weight type of Breton, the "Postier Breton".

For a time, there was a trend to increase the size of draft horse breeds to gain more power and bulk through . However, due to its endurance and gaits, the Breton was an exception. Crossbreeding was shown to reduce the breed's unique qualities, and so in the 1930s, infusions of other blood were abandoned, and this decision led to the preservation of the breed's purity.

Therefore, rather than being subject to crossbreeding itself, the Breton has instead been used to improve many other breeds. Buyers come to France from all over the world to buy Bretons for use in improving their native draft breeds. The Breton had a significant influence on the , after they were sent to () during the 17th century. They have also been used to create the Swiss breed, as well as other heavy draft breeds.

The Breton breed is controlled by the "Syndicat des Éleveurs de Cheval Breton," and its studbook was begun in 1909. Horses are only eligible to be registered if they were born in Brittany ( Region or in the ). Registered foals are branded with a "cross surmounting a splayed, upturned V" on the left side of the neck. Despite the registration restrictions, breeding of the Breton horse has spread across France, and around the world.

The Breton is used in many capacities, due to the various sub-types of the breed. The smaller types can be used under saddle and for fast, light draft work, while the larger types are ideal for heavy draft and agricultural work. They are also commonly used to improve other breeds through cross-breeding. Today, the breed is used as a draft horse on small farms, and is also used to gather seaweed. They are also bred for meat production.