Desierto de los Leones (Desert of the Lions) National Park is located entirely within the limits of the Federal District, it stretches between Cuajimalpa and Álvaro Obregón boroughs.[1] It is located in the Sierra de las Cruces mountain range west of the city center with an area of 1,867 hectares,[2] representing fifteen percent of the entire Valley of Mexico.[3] The area was used as a retreat for a religious group, thus the name Desierto (Desert) means not "arid place", but not populated. The "Leones" part of the name does not refer to the animals, but rather to the original landlord's lastname.[4]

The park's altitude varies between 2,600 and 3,700 meters above sea level,[1] giving the area a relatively cold and damp climate. It is a forested area primarily with pines, oyamel firs and holm oaks with many brooks, ravines and waterfalls.[3] The park is considered to be the oldest protected biosphere in Mexico. It was originally declared a forest reserve in 1876 by President Lerdo de Tejada with the intent of conserving its fresh water springs to supply Mexico City. It was later declared a national park on 27 November 1917, by President Venustiano Carranza.[3][5] 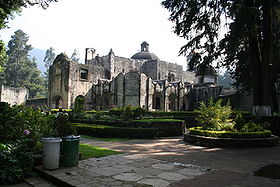 The park's name, Desierto de los Leones is largely due the Carmelite monastery situated just north of its center. Carmelite monks called their residences “deserts.”[6] but the exact origin of “de los Leones” is not known.[7] The first monastery complex was constructed between 1606 and 1611.[7] By 1711, this structure had deteriorated greatly. It was demolished and a new one was built in its place adjoining just south of the original complex.[6] By the end of the 18th century, the cold, damp weather[6] and increasingly frequent visitors forced the monks to move their monastery to Tenancingo in 1801.[8] The monastery was declared a national monument on 16 May 1937.[9] The 18th century structure has a number of areas that have been restored and opened to the public.[6] In addition to the old monastery, the park attracts visitors for the nature that surrounds the complex.[5] The park offers activities such as day camping, overnight camping, hiking,[1] and mountain biking.[10] The forest area of the park has deteriorated due to natural and man-made reasons.[7] There is a insect plague in many of the trees, and insufficient vigilance and control of access has led to the park being used for pasture, garbage dumping,[1] logging, and off-path mountain biking by the park’s neighbors.[3]

The monastery was built in the very early 17th century for a group of Carmelite monks who came from Italy to evangelize the Native Americans.[3] They received the financial backing of Don Melchor de Cuéllar.[6] Originally Melchor stipulated that the monastery be built ten leagues from the city of Puebla. However, in these mountains, then known as Santa Fe, an image of John the Baptist reportedly appeared in San Mateo Tlaltenango before Friar Juan de la Madre de Dios. This caused Cuellar to accept this location for the monastery. Pedro Cortés, the Marquis de Valle de Oaxaca and grandson of Hernan Cortes, objected to the appropriation of the land before the vice royal government. However, he was overruled, and the monks obtained the rights to the land and permission to build from the vice royal government in 1604.[9] The monastery was constructed by Friar Andrés de San Miguel between 1606 and 1611.[7] The first stone was laid on 23 January 1606 by then-Viceroy Juan de Mendoza y Luna.[6] It was a relatively simple structure of two stories,[6] with a wood shingle roof, narrow corridors and small rooms called “cells” for the monks to sleep and study in.[9] A 12,570 meter wall was built with only one opening facing the town of Cuajimalpa which still remains.[9] 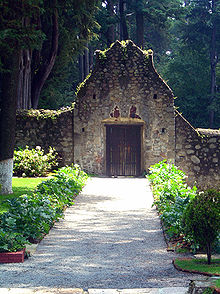 By 1711, this structure had deteriorated greatly due to the area’s dampness, a number of fires and a strong earthquake. It was demolished and new one built in its place. A one story structure was built adjoining south of the old site, with the old site becoming a large patio area just outside the main entrance of the new structure.[6] On 8 February 1712, Brother Pedro del Espiritú laid the first stone of the new monastery. Work continued under Manuel de Herrera and was finished by José Antonio de Roa.[9] At the same time, ten small hermitages were built in the forest outside of the monasteries walls.[6]

By the end of the 18th century, the inclement weather[6] and increasingly frequent visitors forced the monks to move their monastery to Tenancingo in 1801,[8] taking with them the remains of their original benefactor Don Melchor de Cuéllar.[6] The ceded their rights to the land to the newly independent Mexican government in the early 19th century. In 1845, General Santa Anna began to use the area for military exercises and as barracks for his artillery corps. Later, the main church of the complex was gutted, and in its place was a glass factory, which also operated as a foundry for counterfeit coins.[11]

During the Mexican Revolution, the site was occupied by rebel forces.[12] The monastery was declared a national monument on 16 May 1937.[9] The 18th century structure has a number of areas that have been restored and open to the public. Just inside the main entrance is the Patio de la Hosteria. In one of the walls surrounding this patio there is a stone from the 17th century structure inscribed to the memory of its patron Melchor de Cuéllar.[6] In the middle of the structure is the dining area. Here, there is a prominent shelf on which was displayed a human skull to remind the monks of the fragility of mortal life and to encourage them not to enjoy their food too much. For many years, the displayed skull belonged to a Brother Damian de San Basilio, a brother of the monastery, which was put there in honor of his virtue.[6] Only the outside of monastery’s church can be seen as the interior has not been restored. On its façade, the shield of the Carmelite Order and a stain glass window depicting Mount Carmel can be seen. In the center of this façade, there used to be an image of the Our Lady of Mount Carmel with niches containing statues of the prophets Elijah and Elisha. The first stone from the earlier monastery is embedded here, inscribed to honor Viceroy Mendoza y Luna, who authorized the monastery’s founding. The choir had an altarpiece with a life-sized crucifix and served as the main altar. This crucifix was called the “Lord of the Seven Fortunes” and was surrounded by paintings depicting the crucifixion.[6] 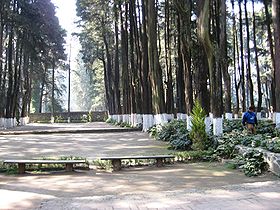 Under the monastery is the basement area, which is almost completely dark, damp and cold.[7][12] Although widely believed to have been used for punishment, they were built to allow water from nearby springs to flow underneath and be used for mundane purposes such as watering the gardens and cleaning.[6] This cold running water also allowed them to use parts of the basement area to refrigerate foods.[11] Outside the main gate of the monastery, just beyond the traces of the walls of the original monastery, is the “Chapel of Secrets.” It has a domed roof and its acoustics allowed monks face into the corner to speak to another monk during the long stretches of imposed silence in the monastery.[6] Surrounding the entire complex is the “Barda de la Excomunicacion” (Wall of Excommunication) named so because supposedly any woman that crossed it was subject to excommunication from the Catholic Church.[8]

Ten small hermitages were built with the monastery and are named San José, San Elias, San Juan Bautista, Santa María Magdalena, Santa Soledad, San Alberto, Getsemaní, de la Trinidad, San Juan de la Cruz and Santa Bibiana. They are small, with an oratory, a bed, a small kitchen and a wall surrounding the building. The hermitage of Santa Bibiana was replaced with a chapel.[9] Three of the closest hermitages are La Soledad, La Trinidad and Getsemani with a path leading to them from the monastery.[8] The structure furthest from the monastery is the chapel/hermitage built at the top of San Miguel Peak.[3] 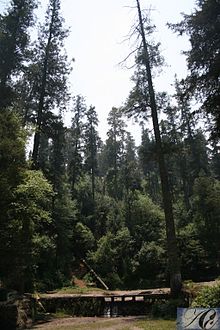 The park is located in the Federal District of Mexico City distributed between the boroughs of Cuajimalpa and Álvaro Obregón. Its altitude varies between 2,600 and 3,700 meters above sea level.[1] The park is seven km long, three km wide with an area of 1,867 hectares.[2] It is one of the most important natural areas of the Federal District, protecting much of the Sierra de las Cruces mountain range[2] and represents about 15% of the Valley of Mexico.[3] The climate of the park is relatively cold and damp due to its altitude.[3] It rains here daily much of the year and fog is common year round.[12] Because of this climate and the rugged terrain,[2] it has many ravines, brooks, streams[3] and a number of waterfalls.[7][12] Plant life is dominated by pines, oyamel firs and holm oaks,[3] which are broken up by meadows.(resdesc) Other flora include Hartweg's Pine Sigesbeckia, alchemilla procumbens, sage, little leaf snowberries , muhlenbergia, festuca, calamagrostis, lupins, beard-tongue, ragwort, muly, and oaks.[1] Animal life in the park has decreased significantly since it was established. Animals that can still be found include raccoons, rabbits, squirrels,[7] white-tailed deer, lynxes, ring-tailed cats, coyotes, grey foxes, skunks, bats, long-tailed shrews, salamanders, rattlesnakes and lizards[1][3] There are a number of species of birds[7] including bluebirds, American Robins, sparrowhawks, red-tailed hawks, turkey buzzards, kestrels, peregrine falcons and song thrushes. The park is considered to be the oldest protected biosphere in Mexico. It was originally declared a forest reserved in 1876 by President Lerdo de Tejada with the intent of conserving its fresh water springs to supply Mexico City. It was later declared a national park on 27 November 1917 by President Venustiano Carranza who was motivated by the area’s landscape and the cultural value of the abandoned monastery which lends its name to the park.[1][3][5][7] The park remained under federal management until 2000, when Secretary of the Environment, Natural Resources and Fishing gave control of the park to the government of Mexico City.(correon)

As a recreational and ecotourism attraction

The ex-monastery occasionally holds art exhibits, but the park’s main attraction is the nature that surrounds the complex.[5] The park offers activities such as day camping, overnight camping, hiking,[1] and mountain biking.[10] Facilities include picnic tables, grills, children’s playgrounds.[1][10] There are also shops selling wood handcrafts and restaurants near the old monastery.[5]

Problems of the park

The forest area of the park has deteriorated due to natural and man-made reasons.[7] Some of the natural problems include the arrival of a larva that strips barks from trees[7] and residual problems from a forest fire in 1998, which destroyed about 450 hectares in the higher elevations of the park. Now there is a fire station called Brigada Regional Uno de la Delegación Cuajimalpa in the community of La Venta and an observation tower at San Miguel peak to watch for fires.[3] There are also trees that are dying from acid rain.[3] Other problems are man-made, as there is insufficient control over human activities in the forest.[1] No one lives in the park proper but urban development has nearly surrounded the entire forest and over 16,000 people live right on the park’s borders.[1][3] There is insufficient vigilance and control of access especially in the southern section.[1] Parts of the park are being used for pasture, garbage dumping,[1] logging, and off-path mountain biking.[3]