The Longdendale Bypass (also known as the A57/A628 Mottram-in-Longdendale, Hollingworth & Tintwistle Bypass) was a controversial road scheme in England (abandoned in March 2009) by the Highways Agency. The aim was to alleviate traffic congestion on the A57 road/A628 road/A616 road routes that presently pass through the villages. There is both strong support and opposition for this long-planned scheme which would have passed through the valley of Longdendale and part of the Peak District National Park.

The road scheme is no longer being progressed by the Highways Agency, and a scaled down proposal by Tameside Borough Council was not included in the list of schemes eligible for central Government funding.[1] 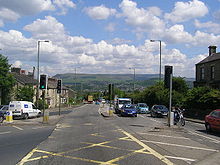 The A57 in Mottram would have been bypassed. 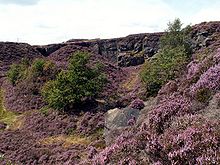 The road would have run through Holybank Quarry, Tintwistle.

The existing A628 trunk road connects the M67 from Manchester to the M1 in South Yorkshire. A single-carriageway road through the villages of Mottram in Longdendale, Hollingworth and Tintwistle and through the Peak District National Park, it is used by a relatively large number of heavy goods vehicles. Supporters of the scheme say that the A628 is one of the most congested A-road routes in the country, with high volumes of traffic (including HGVs) using a road which is totally unsuitable for the volume and nature of traffic it carries[2] and that there is no viable alternative to a bypass.[3]

Concern has been raised that the scheme would not have improved safety on the Woodhead Pass, where the majority of serious accidents occur.[4]

A map showing the proposed route

The scheme envisaged a new dual carriageway that would have headed north-east from the eastern end of the M67, passed under the A6018 Roe Cross Road, Old Road and Old Hall Lane in a 170-metre (558 ft) tunnel approximately 120 metres (394 ft) north of the point where those roads converge. To the east of this area the route would have continued onto a roundabout which provides for a link road down to the A57 at Mottram Moor. To the east of the roundabout, the Preferred Route would have proceeded north-east through the Swallows Wood nature reserve, then curved south-east to join the existing A628 east of Tintwistle near Townhead Farm. Another proposed local authority road, the 'Glossop Spur', would have linked to the A57 at Woolley Bridge.[5]

The Department for Transport has published both a map of the immediate area and another showing routes across the Peak District and the location of Flouch, which were scheduled to have associated traffic works. An independently produced overlay for Google maps is also available.

The plans for the bypass date from the 1990s, and were restored in the Conservative government's Roads for Prosperity white paper in 1989 following a public consultation process. A preferred route was selected in October 1993 but work was suspended in 1996 following further government reviews of the national road-building programme work.[6]

In July 1998 the incumbent Labour government published the results of its own review in the document 'A New Deal for Trunk Roads in England'[7] and included the bypass as a scheme to be progressed through the preparatory stages. In November 2002, the Highways Agency submitted a report to the Regional Planning bodies (North West, East Midlands, Yorkshire and Humberside). The scheme received support from the communities affected by the bypass in the form of a petition with 9,000 signatures that was delivered to Downing Street in February 2003.[8] In this submission, they formed the conclusion that there were no realistic alternatives to a bypass of the villages to solve the problems that existed. In April 2003 the bypass entered the Targeted Programme of Improvements, recognising the likelihood of increased traffic along the route and including proposals to discourage road users from switching from other cross-Pennine routes.[6]

Under the Early Contractor Involvement (ECI) initiative the Highways Agency appointed Mowlem to take the scheme forward. The ECI allows for detailed planning work to be carried out while the scheme moves through statutory procedures.[9] On 31 January 2006 the Secretary of State for Transport published formal proposals in the form of Draft Orders to construct the bypass, make good the older roads, and introduce 'route restraint measures'. The public and other interested organisations were allowed a period of 13 weeks until 5 May 2006 to express their opinions on the proposals.[9] In May 2006 the Highways Agency released information under the Freedom of Information Act of all properties they had purchased in connection with the scheme during the previous 30 years[10], and an updated copy was also released in August 2008.[11]

By the end of the consultation period 1,400 people had written letters expressing their objection to the scheme, with a further 1,000 in favour. Stephen Ladyman, then Minister of State for Transport, stated that "life for people in Mottram, Tintwistle and Hollingworth should be greatly improved by this bypass. Getting traffic out of the villages will make them a safer and healthier place to live".[12] Objections were also received from the Countryside Agency, English Nature, the Peak District National Park and the National Trust.[13] The North West Regional Assembly had presented advice to Ministers in January 2006 and then in June 2006 provided a revised sequencing of priority schemes.[citation needed]

On 6 July 2006 the Secretary of State for Transport responded to these revised sequences and confirmed that funding provision could be made for the Longdendale bypass beyond 2010/11.[14] In December 2006 Rebecca Lush, a long-standing road protester and founder of Road Block, claimed the scheme was "particularly inappropriate and damaging".[15] In January 2007 Stephen Ladyman stated that construction work was expected to start in spring 2013.[16]

The change to the proposed timing and costs required a review of the Environmental Statement, which was duly republished with associated Draft Orders on 8 February 2007. There followed a 6-week consultation period during which the Peak District authority responded.[17] Having been estimated at £90 million in 2003,[8] the cost of the proposal was estimated to have risen to £240–£315m in 2008.[18]

Details of the Public Inquiry were announced in April 2007.[19] It was to be run by Persona Associates with John Watson as Inspector.[19] An official public inquiry website was launched offering news, transcripts and documentation for download.

On 4 December 2007 the Highways Agency published Route Restraint Measures - Explanation of the Further Change in the Traffic Forecasts and suggested that this data would not be available until Easter 2008.[22] The inquiry reviewed this new information on 18 December 2007 at which time it was adjourned to allow the Highways Agency to correct their traffic modelling. The inspector commented that "it was the fifth iteration of the traffic model since the original announcement in February 2006". The inquiry was then "Adjourned Indefinitely Pending the Publication of Revised Evidence by The Highways Agency and Tameside MBC".[19]

On 3 March 2008 the Highways Agency responded to queries from the inspector indicating that it expected to have revised evidence available by October 2008.[23]

In September 2008 the Highways Agency indicated that the revised information would now be available for public consultation in May 2009 and that the public inquiry could start again in Autumn 2009.[24]

In February 2009 the Campaign for Better Transport reported that that funding for the road scheme would not be available before 2016.[25]

In March 2009 the Highways Agency announced that it was pulling out of the public inquiry, citing the decision of the Regional Leaders' Forum, 4NW, to delay the start of the scheme by at least four years. The accompanying press release stated that "the extended period of time between the publication of the draft proposals for the scheme in 2007 and the earliest date at which the Inquiry might be reconvened" was a further factor in the decision to withdraw.[26]

Opponents of the scheme support the Way to Go initiative from Campaign to Protect Rural England (CPRE), which is calling upon Councillors, MPs,and the Peak District National Park to reject the bypass scheme. The campaign group support other measures that it considers would improve local transport without causing damage to the environment.[32] This alternative approach calls for:

Some opponents of the scheme also advocate 'Translink' as an alternative proposal, which envisages enabling (through the reopening of the Woodhead Tunnel) direct rail links between Glossop and Sheffield and beyond. Translink claims the "Rolling highway" would be a quick, safe and cost-effective means of carrying freight across the Pennines, a credible alternative to using the A616/A628 road. HGV vehicles would roll on and roll off the low-floor wagons.

Whilst supporters of the scheme argue for the bypass on the basis that it will relieve the three villages of traffic congestion, the Highways Agency's own figures do not fully support this contention.[34] In the Environmental Statement produced by the Highways Agency, the 'Predicted Traffic Figures' support the following largely temporary reductions in traffic by 2010:

All other routes show a marked increase in traffic, both immediately and over time:

The stated aim of the bypass is to reduce traffic flow along (at least) the A57 and the reviewed environmental statement of February 2007 provided radically different traffic forecasts to the originals summarised above. In particular, the new forecast indicated that there would be over 26,000 vehicles per day travelling along Back Moor. According to the data presented by the Highways Agency, this amount of traffic is greater than that presently using the main A57 Hyde Road through Mottram.

Government funded research carried out by English Nature found that the proposed scheme would increase greenhouse gas CO2 pollution in the area by 15,840 tonnes per annum. Furthermore, the costs of the CO2 pollution were not included in the Highways Agency cost–benefit analysis.[35] In the republished Environmental Statement summary, the Highways Agency admit that the scheme will entail "an estimated increase of 9% in emissions of the greenhouse gas carbon dioxide".[36] However, in a Statement of the Area address on 21 November 2006, the Leader of Tameside Council announced that 4,500 trees had already been planted, increasing to 10,000 to compensate for the loss of trees when the bypass is built and to help mitigate the increases in CO2 emissions. The council leader also claimed that each tree planted would offset 75 kg of CO2 per annum.[37] This figure—for trees to be planted in northern England—is 3.5 times greater than that for trees planted in tropical rainforests.[38]

In an alternative proposal to the bypass, Translink claim that the removal of HGVs from the A628 onto a cross-Peak train line would save approximately 100,000 tons of CO2 per year.[39]