Macarius of Egypt
For other persons named Macarius, see Macarius.

Macarius of Egypt (ca. 300 – 391) was an Egyptian Christian monk and hermit. He is also known as Macarius the Elder, Macarius the Great and The Lamp of the Desert.

Macarius was born in Upper Egypt. A late tradition places his birthplace in the village of Shabsheer (Shanshour), in Al Minufiyah Governorate, Egypt around 300 A.D. At some point before his pursuit of asceticism, Macarius made his living smuggling niter in the vicinity of Nitria, a vocation which taught him how to survive in and travel across the wastes in that area.[1]

At a young age, Macarius was forced to get married against his will. Thus, he pretended to be sick and ask for his parents' permission to go to the wilderness to relax. At his return, he found that his wife had died, and shortly after, his parents departed as well. Macarius subsequently distributed all his money among the poor and needy. Seeing his virtues, the people of his village brought him to the bishop of Ashmoun who ordained him priest.

A while later, a pregnant woman accused him of having defiled her. Macarius did not attempt to defend himself, and accepted the accusation in silence. However, when the woman's delivery drew near, her labor became exceedingly difficult. She did not manage to give birth until she confessed Macarius's innocence. A multitude of people then came asking for his forgiveness, but he fled to the Nitrian Desert to escape all mundane glory.

While at the desert, he visited Anthony the Great and learned from him the laws and rules of monasticism. When he returned to the Scetic Desert at the age of forty, he presided over its monastic community for the rest of his life. Ten years after going into the desert, he became a priest.[2]

For a brief period of time, Macarius was banished to an island in the Nile by the Emperor Valens, along with Saint Macarius of Alexandria, during a dispute over the doctrine of the Nicene Creed. At their return on 13 Paremhat, they were met by a multitude of monks of the Nitrian Desert, numbered fifty thousand, among whom were Saint Pishoy and Saint John the Dwarf.

Macarius died in the year 391. After his death, the natives of his village of Shabsheer stole the body and built a great church for him in their village. During the papacy of Pope Michael V of Alexandria, who brought the relics of Saint Macarius back to the Nitrian Desert on 19 Mesori. Today, the body of Saint Macarius is found in his monastery, the Monastery of Saint Macarius the Great in Scetes, Egypt.

Macarius is a saint in the Roman Catholic Church and Eastern Catholic Churches, the Eastern Orthodox Churches, and the Oriental Orthodox Churches. Saint Macarius of Egypt founded a monastery that bears his name, the Monastery of Saint Macarius the Great, which has been continuously inhabited by monks since its foundation in the fourth century. Today it belongs to the Coptic Orthodox Church. The entirety of the Nitrian Desert is sometimes called the Desert of Macarius, for he was the pioneer monk in the region. The ruins of numerous monasteries in this region almost confirm the local tradition that the cloisters of Macarius were equal in number to the days of the year. 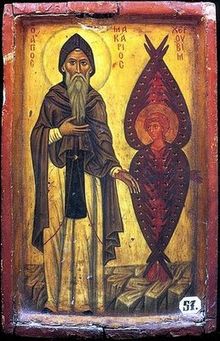 St. Macarius the Great standing next o a seraph.

Gennadius (De viris illustribus 10) recognizes only one genuine letter of Macarius, which is addressed to younger monks. Although fifty Spiritual Homilies were ascribed to Macarius a few generations after his death, modern patristic scholars have established that Macarius the Egyptian cannot possibly be their author.[3] Exactly who the author of these fifty Spiritual Homilies was has not been definitively established, although it is evident from statements in them that the author was from Upper Mesopotamia, where the Roman Empire bordered the Persian Empire, and that they were not written later than 534.[4] In addition to the homilies, a number of letters have been ascribed to Macarius. The first letter, called "Ad filios Dei," may indeed be the genuine letter by Macarius the Egyptian that is mentioned by Gennadius (Vir. Ill.10), but the other letters are probably not by Macarius. The second letter, the so-called "Great Letter" used the De instituto christiana of Gregory of Nyssa, which was written c. 390; the style and content of the "Great Letter" suggest that its author is the same anonymous Mesopotamian who wrote the fifty Spiritual Homilies. [5]

The seven so-called Opuscula ascetica edited under his name by Petrus Possinus (Paris, 1683) are merely later compilations from the homilies, made by Simeon the Logothete, who is probably identical with Simeon Metaphrastes (d. 950). The teachings of Macarius are characterized by a strong Pneumatic emphasis that closely intertwines the salvific work of Jesus Christ (as the 'Spirit of Christ') with the supernatural workings of the Holy Spirit. This 'Pneumatic' thrust in the Spiritual Homilies is often termed 'mystical' and as such is a spiritual mode of thought which has endeared him to Christian mystics of all ages, although, on the other hand, in his anthropology and soteriology he frequently approximates the standpoint of St. Augustine. Certain passages of his homilies assert the entire depravity of man, while others postulate free will, even after the fall of Adam, and presuppose a tendency toward virtue, or, in semi-Pelagian fashion, ascribe to man the power to attain a degree of readiness to receive salvation.

The debate concerning the 'extraordinary giftings' of the Holy Spirit in the post-apostolic age is given textual support by the Macarian Homilies in favor of a post-apostolic attestation of 'miraculous' Pneumatic giftings to include healings, visions, exorcisms, etc. The Macarian Homilies have thus influenced Pietist groups ranging from the Spiritual Franciscans (West) to Eastern Orthodox monastic practice to John Wesley to modern charismatic Christianity.

Macarius was not semi-Pelagian. He fought Pelagianism, specifically the Messalians, who agrued that by struggling against Satan, one could compel grace to be drawn down. Macarius was clear that theosis or sanctification was the work of the Holy Spirit, Who entered the believers at baptism. His work was the forerunner and held argument with Augustine's latter and more popularized writings against Pelagius.