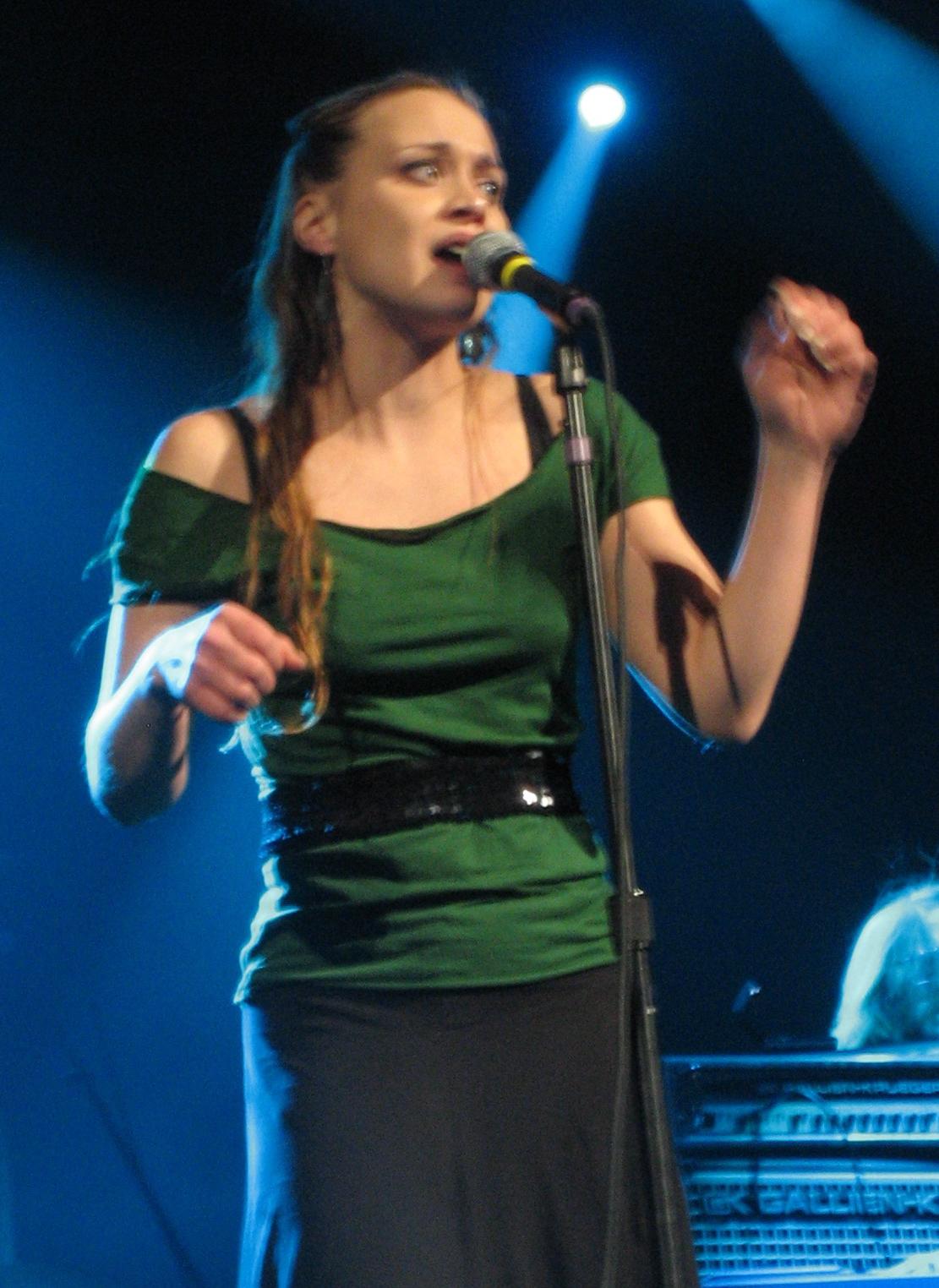 Fiona Apple (born Fiona Apple McAfee Maggart on , ) is a Grammy-winning American . She gained popularity through her 1996 album "Tidal", especially with the single "Criminal", and because of the made for it. Her music is rooted equally in early , pop, and alt-rock and is fundamentally based on very personal poetic verses backed up with progressive production often featuring instruments such as the french horn, or even a full orchestra. Apple is a and a supporter of (PETA).

Apple's family has roots in entertainment. Born in , she is the daughter of singer Diane McAfee and actor . Her older sister, Amber, sings under the stage name . Her half brother Spencer is a director and directed the video for her single "". Her half brother starred in the TV series "The Sentinel". In addition, her maternal grandparents were Millicent Green, a dancer with the , a series of 1920s musical similar to the , and Johnny McAfee, a and vocalist of the era; her grandparents met while touring with and his Orchestra.

Apple's parents put her in therapy when she was 11, after she joked to a friend that she was going to kill her sister Amber and herself. [http://www.bestsexycelebs.com/fiona_apple] The following year, she was d on her way home from school; she would allude to the trauma years later in such songs as "Sullen Girl". [http://www.celebrityindex.com/Fiona_Apple/biography.html]

Apple's break into the music industry came in 1994, when Apple gave a demo tape of three songs to a friend who was the babysitter for music publicist Kathryn Schenker. Schenker passed the tape along to producer and manager Andy Slater. [ [http://www.imagesjournal.com/issue05/features/fiona.htm Images - Fiona Apple ] ] Apple's rich voice, piano skills and lyrics got the attention of Sony Music executive Andy Slater, [ [http://www.the-wallflowers.net/article040200.htm The Key to Success Lies in the Mix ] ] who signed her to a record deal.

In 1996 Apple's debut album, "Tidal", was released by Epic, a subsidiary of Sony. The album went on to sell 2.7 million copies

"Criminal", the third single, became Apple's breakthrough hit. The song reached the top forty on the U.S. "Billboard" Hot 100, while the controversial -directed music video &mdash; in which a scantily-clad Apple cavorted in a '70s-era tract house &mdash; became very popular on . Apple later said: "I decided if I was going to be exploited, then I would do the exploiting myself"

Other singles from "Tidal" included "Shadowboxer", "Slow like Honey" , "Sleep to Dream", "The First Taste" and "Never Is a Promise". Her public image was tempestuous; Most notoriously, while accepting the 1997 MTV Video Music Award for "Best New Artist" for "Sleep to Dream", she proclaimed: "This world is bullshit, and you shouldn't model your life on what you think that we think is cool, and what we're wearing and what we're saying", referring to the mainstream music industry. Host would comment on her speech later on during the program, saying, "That Fiona Apple was mad, huh? Fiona X was up here". [ [http://www.ew.com/ew/article/0,,289482_2,00.html THE HOT ROCK | Chris Rock | Pop Culture News | News | Entertainment Weekly | 2 ] ] Though her comments were generally greeted with cheers and applause at the awards ceremony, the media backlash was immediate.

She was unapologetic, however: "I just had something on my mind and I just said it. And that's really the foreshadowing of my entire career and my entire life. When I have something to say, I'll say it."

During this period Apple contributed covers of ' "" and 's "" to the soundtrack of the film "Pleasantville".

Apple's second album, "", was released in 1999. Its full title is "When the Pawn Hits the Conflicts He Thinks like a King What He Knows Throws the Blows When He Goes to the Fight and He'll Win the Whole Thing Fore He Enters the Ring There's No Body to Batter When Your Mind Is Your Might So When You Go Solo, You Hold Your Own Hand and Remember That Depth Is the Greatest of Heights and If You Know Where You Stand, Then You'll Know Where to Land and If You Fall It Won't Matter, Cuz You Know That You're Right". The title is a poem Apple wrote after reading the readers' letters that appeared in "Spin" after an article had cast her in a negative light in an earlier issue. [iTunes Originals Interview, 2006] The title's length earned it a spot in the "" for 2001. However, as of October 2007, it is no longer the longest album title, as released "", a album whose title surpasses "When the pawn..."'s length by 100 characters. [ [http://www.kevinenjoyce.com/soulwax/ Soulwax remixes] . The full title of the Soulwax compilation is "Most of the remixes we've made over the years except for the one for Einstürzende Neubauten because we lost it and a few we didn't think sounded good enough or just didn't fill in length-wise. But including some that are hard to find because either people forgot about them or simply because they haven't been released yet. A few we really love. One we think is just OK. Some we did for free. Some we did for money. Some just for ourselves without permission and some for friends as swaps but never on time and always at our studio in Ghent."]

The album was cultivated during Apple's relationship with film director . "When the Pawn..." received a positive reception from publications such as "" and "".

"When the Pawn...", which was produced by , used more expressive lyrics, experimented more with drum loops, and incorporated both and drummer Matt Chamberlain. [Citation
title = Seattle Weekly: Matt Chamberlain Talk About Recording With Apple
url = http://blogs.seattleweekly.com/reverb/2008/09/matt_chamberlain_drummer_for_t.php/1
accessdate = 2008-09-17] It did not fare as well commercially as her debut, though it was an RIAA-certified platinum album

In 2000, at a concert at the in New York, Apple became dissatisfied with the venue's sound and broke down on stage, berating s and the audience with vulgar language, before ending her set early and storming off stage. [cite news
url=http://www.newyorker.com/critics/music/?051010crmu_music
title=Extraordinary Machines: Fiona Apple's new album
author=Sasha Frere Jones
publisher=
date=2005-10-10
accessdate=2006-08-06]

Apple sang with on a cover of 's "Bridge over Troubled Water" that ended up on Cash's album "" and was nominated for a for "". She also collaborated with him on 's "Father and Son", which was included on Cash's 2003 collection "Unearthed".

Apple's third album, "", was originally produced by . Recording sessions began in 2002 at Ocean Way studios in Nashville, Tennessee, but later moved to the Paramour in Los Angeles. Work on the album continued until 2003, and in May of that year it was submitted to Sony executives.

In 2004 and 2005 tracks were leaked on the in format and played on U.S. and international radio; subsequently, MP3s of the entire album, believed to have been produced by Brion (although he later claimed the leaked tracks were "tweaked" beyond his own work citequote), went online. Although a website distributing the album was quickly taken offlineFact|date=October 2007, they soon reached P2P networks and were downloaded by fans. A fan-led campaign, , was launched in support of the album's official release.

In August 2005, the album was given an October release date. Production had been largely redone by , who had previously played bass on "Pawn", and co-produced by experimentalist . "Spin" later reported: "Fans erroneously thought that Apple's record label, Epic, had rejected the first version of "Extraordinary Machine"... in reality, according to Elizondo, Apple was unhappy with the results, and it was her decision to redo the record, not her label's".citequote Two of the eleven previous leaked tracks were relatively unchanged, nine were completely retooled, and one new song was also included. According to Elizondo, "Everything was done from scratch".citequote

The final mastering of Extraordinary Machine was performed by , the released version has a far higher level of compression than any of Fionas' previous releases.

"Extraordinary Machine" became the highest-charting album of Apple's career in the U.S. on its release (debuting at number seven) and was nominated for a Grammy Award for "Best Pop Vocal Album". It was eventually certified gold

Apple went on a live tour to promote the album in late 2005, and from early 2006 supported on their tour of North America.

In June 2006 Apple appeared on the joke track "Come over and Get It (Up in 'Dem Guts)" by comedian . Galifianakis previously appeared in the music video for Apple's "Not About Love". The joke track is a complete departure from Apple's previous work, both lyrically and musically. It is a hip hop/dance track that features Apple singing lines such as "Baby, show me your fanny pack/I'll show you my fanny". [ [http://www.perezhilton.com/topics/listen_to_this/listen_to_this_come_over_and_get_it_20060625.php#comments Listen to this come over and get it] "Perezhilton.com" Retrieved on 05-09-07 ]

Apple recorded a cover of "Sally's Song" for the special edition release of the soundtrack, released in 2006, for the film "". In May 2006 Apple paid tribute to on 's concert series "" by performing Costello's hit "I Want You"; [ [http://www.decadesrocklive.com/artists/elviscostello.php Decades Rock Live] ] her version was subsequently released as a digital single.

* California Area Music Award for "Best Female Vocalist" for "When the Pawn...".

* Grammy Awards nomination for "Best Female Rock Vocal Performance" for "Paper Bag", and "" for "When the Pawn".

* Grammy Award nomination for Best Country Collaboration with Vocals for "Bridge over Troubled Water" (shared with ).