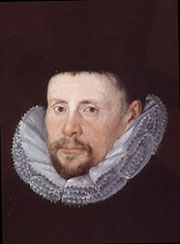 He represented Winchester in parliament from 1584 to 1601, when he was returned for Southampton. In 1594 he was appointed recorder of London, and in 1595 was chosen solicitor-general in preference to . This office he retained under James I and was knighted in 1603. In 1604 he was created chief baron of the exchequer and presided over many important state trials.

In 1607 he was promoted to the chief justiceship of the king's bench, and was one of the judges at the trial of the "" in 1608, siding with the majority of the judges in declaring that persons born in after the accession of James I were entitled to the privileges of natural-born subjects in England.

He purchased the North Stoneham estate from Henry Wriothesley, a young who inherited the title and estate at the age of eight.

He was praised by his contemporaries, more particularly Coke, for his great judgments, integrity and discretion. He died on at his seat, Stoneham Park, . His descendants were still in possession of the estate in 1908. The Fleming Arms public house, and Fleming Road, both in , are named after the family.