Although certain specific configurations had been studied earlier (for instance by Thomas Kirkman in 1849), the formal study of configurations was first introduced by Theodor Reye in 1876, in the second edition of his book Geometrie der Lage, in the context of a discussion of Desargues' theorem. Ernst Steinitz wrote his dissertation on the subject in 1894, and they were popularized by Hilbert and Cohn-Vossen's 1932 book Anschauliche Geometrie (reprinted in English as Geometry and the Imagination).

Configurations may be studied either as concrete sets of points and lines in a specific geometry, such as the Euclidean or projective planes, or as abstract incidence structures. In the latter case they are closely related to regular hypergraphs and regular bipartite graphs.

as this product is the number of point-line incidences. 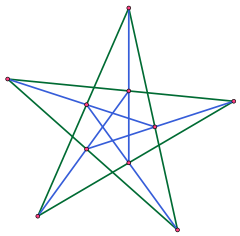 Notable projective configurations include the following:

The number of (n3) configurations

The number of nonisomorphic configurations of type (n3), starting at n = 7, is given by the sequence 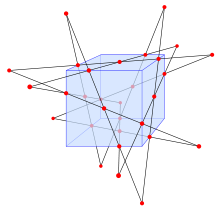 A further generalization is obtained in three dimensions by considering incidences of points, lines and planes, or j-spaces (0 ≥ j > 3), where each j-space is incident with Njk k-spaces (j ≠ k). Writing Njj for the number of j-spaces present. a given configuration may be represented by the matrix:

The principle extends generally to n dimensions, where 0 ≥ j > n. Such configurations are related mathematically to regular polytopes (Coxeter 1948).