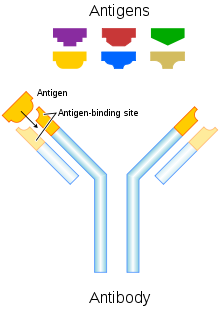 Each antibody binds only one specific antigen.

Monoclonal antibody therapy is the use of monoclonal antibodies (or mAb) to specifically bind to target cells or proteins. This may then stimulate the patient's immune system to attack those cells. It is possible to create a mAb specific to almost any extracellular/ cell surface target, and thus there is a large amount of research and development currently being undergone to create monoclonals for numerous serious diseases (such as rheumatoid arthritis, multiple sclerosis and different types of cancers). There are a number of ways that mAbs can be used for therapy. For example: mAb therapy can be used to destroy malignant tumor cells and prevent tumor growth by blocking specific cell receptors. Variations also exist within this treatment, e.g. radioimmunotherapy, where a radioactive dose localizes on target cell line, delivering lethal chemical doses to the target.[1]

Structure and function of human and therapeutic antibodies

Immunoglobulin G (IgG) antibodies are large heterodimeric molecules, approximately 150 kDa and are composed of two different kinds of polypeptide chain, called the heavy (~50kDa) and the light chain (~25kDa). There are two types of light chains, kappa (κ) and lambda (λ). By cleavage with enzyme papain, the Fab (fragment-antigen binding) part can be separated from the Fc (fragment crystalline) part of the molecule (see image). The Fab fragments contain the variable domains, which consist of three hypervariable[disambiguation needed

] amino acid domains responsible for the antibody specificity embedded into constant regions. There are four known IgG subclasses all of which are involved in Antibody-dependent cellular cytotoxicity.[2]

The immune system responds to the environmental factors it encounters on the basis of discrimination between self and non-self. Tumor cells are not specifically targeted by one's immune system since tumor cells are the patient's own cells. Tumor cells, however are highly abnormal, and many display unusual antigens that are either inappropriate for the cell type, its environment, or are only normally present during the organisms' development (e.g. fetal antigens).[2]

Antibodies are a key component of the adaptive immune response, playing a central role in both in the recognition of foreign antigens and the stimulation of an immune response to them. The advent of monoclonal antibody technology has made it possible to raise antibodies against specific antigens presented on the surfaces of tumors.[3] 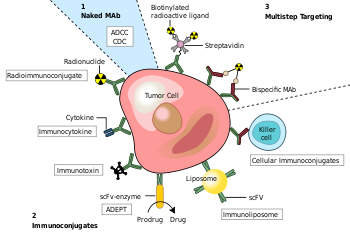 Immunotherapy developed as a technique with the discovery of the structure of antibodies and the development of hybridoma technology, which provided the first reliable source of monoclonal antibodies.[5] These advances allowed for the specific targeting of tumors both in vitro and in vivo. Initial research on malignant neoplasms found MAb therapy of limited and generally short-lived success with malignancies of the blood.[6][7] Furthermore treatment had to be specifically tailored to each individual patient, thus proving to be impracticable for the routine clinical setting.

Throughout the progression of monoclonal drug development there have been four major antibody types developed: murine, chimeric, humanised and human.

Initial therapeutic antibodies were simple murine analogues, which contributed to the early lack of success. It has since been shown that these antibodies have: a short half-life in vivo (due to immune complex formation), limited penetration into tumour sites, and that they inadequately recruit host effector functions.[8] To overcome these difficulties the technical issues initially experienced had to be surpassed. Chimeric and humanized antibodies have generally replaced murine antibodies in modern therapeutic antibody applications. Hybridoma technology has been replaced by recombinant DNA technology, transgenic mice and phage display.[9] Understanding of proteomics has proven essential in identifying novel tumour targets.

Initially, murine antibodies were obtained by hybridoma technology, for which Kohler and Milstein received a Nobel prize. However the dissimilarity between murine and human immune systems led to the clinical failure of these antibodies, except in some specific circumstances. Major problems associated with murine antibodies included reduced stimulation of cytotoxicity and the formation complexes after repeated administration, which resulted in mild allergic reactions and sometimes anaphylactic shock.[8]

To reduce murine antibody immunogenicity, murine molecules were engineered to remove immunogenic content and to increase their immunologic efficiency.[8] This was initially achieved by the production of chimeric and humanized antibodies. Chimeric antibodies are composed of murine variable regions fused onto human constant regions. Human gene sequences, taken from the kappa light chain and the IgG1 heavy chain, results in antibodies that are approximately 65% human. This reduces immunogenicity, and thus increases serum half-life.

] amino acid domains into human antibodies. This results in a molecule of approximately 95% human origin. However it has been shown in several studies that humanised antibodies bind antigen much more weakly than the parent murine monoclonal antibody, with reported decreases in affinity of up to several hundredfold.[10][11] Increases in antibody-antigen binding strength have been achieved by introducing mutations into the complementarity determining regions (CDR),[12] using techniques such as chain-shuffling, randomization of complementarity determining regions and generation of antibody libraries with mutations within the variable regions by error-prone PCR, E. coli mutator strains, and site-specific mutagenesis.[1]

The heavy and light chains of human IgG proteins are expressed in structural polymorphic (allotypic) forms. Human IgG allotype has been considered as one of the many factors that can contribute to immunogenecity.[13] The general scheme of a monoclonal antibody development program is described in.[14]

Anti-cancer monoclonal antibodies can be targeted against malignant cells by several mechanisms:

Monoclonal antibodies used for autoimmune diseases include infliximab and adalimumab, which are effective in rheumatoid arthritis, Crohn's disease and ulcerative Colitis by their ability to bind to and inhibit TNF-α.[17] Basiliximab and daclizumab inhibit IL-2 on activated T cells and thereby help preventing acute rejection of kidney transplants.[17] Omalizumab inhibits human immunoglobulin E (IgE) and is useful in moderate-to-severe allergic asthma.