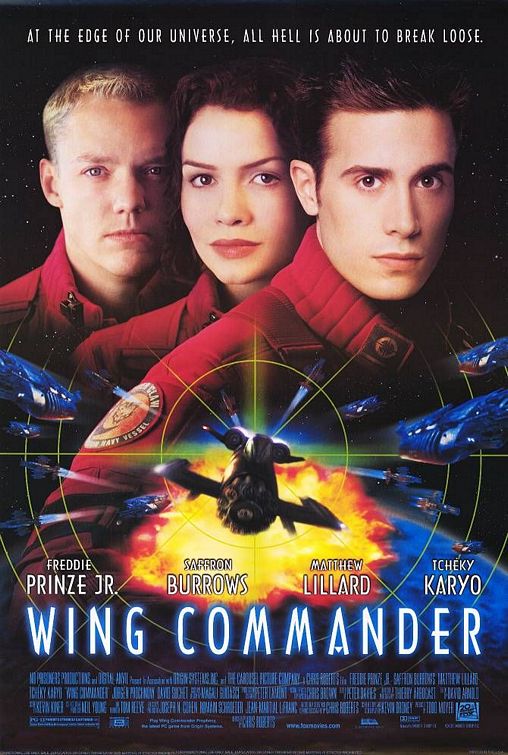 "Wing Commander" is a based on the same titled video game series. It was directed by , the creator of the game series, and stars Scooby-Doo's and , , , and David Warner. In the , the film is rated for sexual references and sci-fi action/violence. Principal photography occurred in and post-production was done in . The film was a financial failure, returning an estimated $11.5 million in US theaters on a budget of $30 million. [ [http://www.the-numbers.com/movies/1999/WINGC.php] the-Numbers.com estimate of Box office return]

In , the film was released by , whose animation division produced the TV series based on the video games, "".

Set one month before "Wing Commander"Fact|date=October 2007, the story unfolds in the middle of an interstellar war between the and the cat-like alien . The movie tells the story of and , young pilots assigned to the carrier Tiger Claw, as they fly their first combat missions. A massive Kilrathi armada is en-route for Earth and the Tiger Claw is assigned to fight a suicidal delaying action in order to allow the rest of the Terran fleet to reach Earth. Tensions exist between Blair and his fellow pilots due to the fact that he is part "Pilgrim". Pilgrims are a strain of humanity who have special abilities relating to interstellar navigation; they had previously fought a war against the Confederation.

Relations to other "Wing Commander" works

The film has been criticized by some fans for altering the visual style of the most recent "Wing Commander" games. This is regarded as a somewhat tenuous argumentFact|date=October 2007 given the extreme popularity of series creator Roberts' previous stylistic re-imagining of the series between ' and "III"Fact|date=October 2007. The most notable shift between ' and the movie is the appearance of the Kilrathi. Although the movie's Kilrathi retain feline facial characteristics, they lose their signature fur entirely. Roberts' has since said that this change was a result of his ongoing unhappiness with the appearance of the 'live' Kilrathi, none of which lived up to his internal vision. He had previously re-imagined the Kilrathi between "Wing Commander III" and "", going so far as to completely redesign the Melek character between the two games. [" [http://guide.solsector.net/images/Wc3melek.jpgMelek in Wing Commander III] '] [' [http://wcnews.com/newershots/full/animatronicmelek1.jpgMelek in "Wing Commander IV] '] Roberts, even after production of the film, was left unsatisfied with the results of the film version of the Kilrathi.

As with the FMV games, Roberts' cast the movie based on actors' skill rather than their physical resemblance to those who previously held the partFact|date=October 2007. This has become something of a tradition across the series. Paladin, for example, has gone from being a thin fair-haired man in "Wing Commander I" & "II" [ [http://wcnews.com/newershots/headmuseum/wc1paladin.gif] Paladin in WC1/2] (voiced by Martin Davies) to being a large dark-haired Scotsman in "Wing Commander III" and "IV" [ [http://wcnews.com/newestshots/full/rotkparody2.jpg] Paladin in WC3/4] (played by ) to being a middle aged French accented Turk in the movie [ [http://www.wcnews.com/shots/movie/full/stlg5.jpg] Paladin in the film] (played by Karyo). In one spinoff title, "Super Wing Commander", he inexplicably wears an [ [http://www.wcnews.com/newshots/full/swc-paladin.jpg] Paladin in Super Wing Commander] . The novelization of previously established that Paladin's Scottish accent was an affectation. The characters' in-continuity backgrounds, expanded in the movie novelization and its sequel "Pilgrim Stars", remain virtually unchanged from the video games.

A notable discrepancy is in one of the film's final scenes, where Blair's Rapier fighter, whose maximum speed is 450 kilometers per second, is overtaken in less than one minute by a pursuing Kilrathi Snakeir supercarrier, which has a max speed of only 150 kps [ [http://www.wcnews.com/ships2/wc1kilrathi.shtml] Kilrathi Snakeir carrier specs] .

"", the latest game in the series, confirms that the "Wing Commander" movie is treated as part of the same canon as the video games. "Arena" includes references to events like the Pilgrim War

The novelization of the film by Peter Telep was fairly faithful to the film itself. However, in the book the plot to discredit Blair is more far-reaching and includes 's character, Captain Jason Sansky. There is also more general information about the Kilrathi and their first attack on a space station. The novel is based on the film's shooting script, which includes most of this information. Significant cuts removed the 'traitor' subplot from the finished film, since it heavily involved the unimpressive Kilrathi puppets.