Monsignor, pl. monsignori, is the form of address for those members of the clergy of the Catholic Church holding certain ecclesiastical honorific titles. Monsignor is the apocopic form of the Italian monsignore, from the French mon seigneur, meaning "my lord". It is abbreviated Mgr,[1] Msgr,[2] or Mons..[3]

As a form of address, "Monsignor" is not itself an appointment (properly speaking, one cannot be "made a monsignor" nor can one be "the monsignor of a parish"). The three awards or offices most often associated with the style "monsignor" are Protonotary Apostolic, Honorary Prelate, and Chaplain of His Holiness. These awards are granted by the Pope, usually at the request of the local bishop.

Title and forms of address

In some countries, Monsignor (or its foreign language equivalent) is the usual style of address for all higher prelates of the Roman Church below the rank of cardinal or patriarch, including bishops and archbishops. In other countries, particularly English-speaking ones, it is not used for bishops, but only for priests who have received certain specific honorary awards or who hold certain offices.

The 1969 Instruction of the Secretariat of State indicated that the title of "Monsignor" may be used for Bishops. This is normal practice in Italian, French and Spanish. It is unusual in English. The same instruction indicated that, in the case of Bishops, "Reverendissimus" (usually translated in this case as "Most Reverend", rather than "Very Reverend"), may be added to the word "Monsignor", as also in the case of prelates without episcopal rank who head offices of the Roman Curia, judges of the Rota, the Promotor General of Justice and the Defender of the Bond of the Apostolic Signatura, the Apostolic Protonotaries "de numero", and the four Clerics of the Camera.[5] 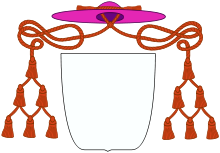 Generic coat of arms of a Protonotary Apostolic: amaranth galero with 12 scarlet tassels.

Since 1968, Apostolic Protonotaries are classified either de numero or supernumerary. Most of the former classes of Chamberlains and Chaplains have been abolished, leaving only a single class of "Chaplains of His Holiness", a specifically priestly-sounding category.[7] 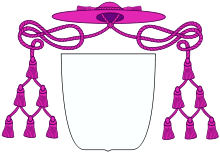 Generic coat of arms of an Honorary Prelate: amaranth galero with 12 violet tassels.

As a result monsignori are now classed into the following three ranks, in descending order of precedence: 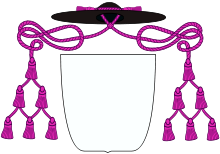 Generic coat of arms of a Chaplain of His Holiness: black galero with 12 violet tassels.

For the history of each of these classes of monsignori, see the article on each.

Before 1968, the appointment of a Privy Chamberlain expired at the death of the Pope who granted it. This no longer holds.[7] Those listed in the index of the Annuario Pontificio as Chaplains of His Holiness continue to be listed in the edition that follow the death of the Pope, as after the deaths of Popes Paul VI and John Paul I in 1978 and after that of Pope John Paul II in 2005.

The 1969 Instruction of the Secretariat of State also simplified the dress of monsignori.

Under legislation of Pope Pius X, vicars general and vicars capitular (the latter are now called diocesan administrators) are titular (not actual) Protonotaries durante munere, i.e. as long as they held those offices, and so are entitled to be addressed as Monsignor.[9]

The only privileges of dress that Pope Pius X granted them were a black silk fringed sash, black piping on the biretta with a black tuft,[10] and a black mantelletta. As a result of this they were in some countries referred to as "black protonotaries."[11] However, "Pontificalis domus" of Paul VI removed this position from the Pontifical Household, even though the title of "monsignor", which is to be distinguished from a prelatial rank, has not been withdrawn from vicars general, as can be seen, for instance, from the placing of the abbreviated title "Mons." before the name of every member of the secular (diocesan) clergy listed as a vicar general in the Annuario Pontificio. (Honorary titles such as that of "Monsignor" are not considered appropriate for religious.)

The Secretariat of State has set minimum qualifications of age and priesthood for the appointment of Chaplains of His Holiness (35 years of age and 10 of priesthood), Honorary Prelates (45 of age and 15 of priesthood) and Protonotaries Apostolic Supernumerary (55 of age and 20 of priesthood). However, it waives the minimum age limit for vicars general proposed for appointment as Honorary Prelates, in view of the fact that, as long as they hold the office of vicar general, they also hold the still higher rank of Protonotary Apostolic Supernumerary. For the same reason, the Secretariat of State does not consider it appropriate that someone who is already a vicar general be appointed only a Chaplain of His Holiness.